Salisbury poisoning victim Yulia Skripal has released a statement through police in London. Yulia has insisted she is on the…

Salisbury poisoning victim Yulia Skripal has released a statement through police in London. Yulia has insisted she is on the road to recovery. She and her father Sergei were attacked with a nerve agent on March 4.

Yulia issued a statement on Thursday saying the “entire episode is somewhat disorientating“.

“I woke up over a week ago now and am glad to say my strength is growing daily,” the 33-year-old said in the statement issued on her behalf by London police.

“I am grateful for the interest in me and for the many messages of goodwill that I have received.

“I am sure you appreciate that the entire episode is somewhat disorientating, and I hope that you’ll respect my privacy and that of my family during the period of my convalescence.”

Last week Yulia was reported to be in a stable condition after falling into a coma following the chemical attack. Moscow-based relative Viktoria Skripal told the Guardian that she had spoken to Yulia and that a statement would soon be released by Russian news agencies – “even in English.”

“She said everything is fine and she is doing OK,” Viktoria told the Guardian over the telephone. “That’s all I’m going to say.”

Viktoria also recorded the phone conversation with Yulia which was later played on a talk show on TV network Russia-1. Yulia can be heard telling her relative that she is calling from a phone that is “just temporary”. The 33-year-old also said that neither she nor her father had health problem that could not be fixed.

In the recording, Viktoria can be heard telling her cousin “If I get my visa tomorrow, on Monday I will fly to you”, to which Yulia responded, “nobody will give you a visa.” 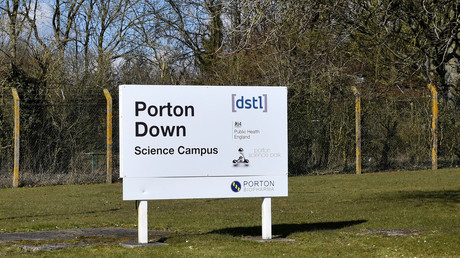 At one point in the conversation, Yulia cut off Viktoria from going into depth about what happened, insisting “later, let’s talk later. In short, everything is OK.”

When asked about her father Sergei Skripal, who is still understood to be in a critical condition, Yulia can be heard replying that “Everything’s OK. He’s resting now, he’s sleeping. Everyone’s health is OK. No one has had any irreversible [harm].

“I’m being discharged soon,” she added.

Yulia and her father Sergei Skripal were found slumped on a bench in Salisbury on March 4, after they were attacked with an A-234 nerve agent, similar to Novichok. Since the attack on the ex-Russian double agent and his daughter, the British government has placed the blame at Russia’s feet; a claim which Moscow has repeatedly denied.

On Wednesday, Porton Down chief executive Gary Aitkenhead revealed that the laboratory was unable to confirm the origin of the chemical agent used in the attack.