A U.S. warship and military aircraft were spotted traveling southwest from Japan towards China yesterday afternoon, in what some fear is… 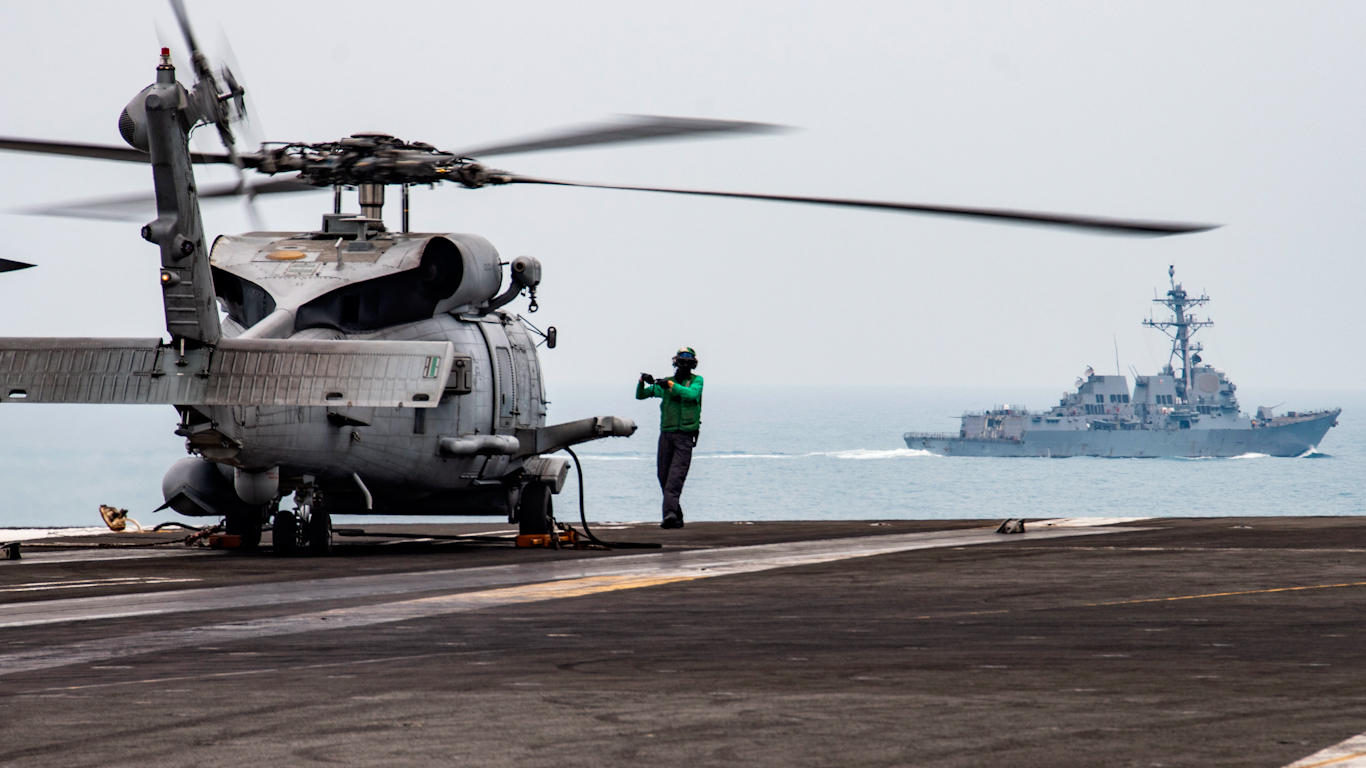 A U.S. warship and military aircraft were spotted traveling southwest from Japan towards China yesterday afternoon, in what some fear is a growing escalation of aggression towards Beijing. A Boeing P-8A Poseidon (hex code AE68A2), an anti-submarine aircraft appeared to be working in conjunction with the anti-submarine destroyer the U.S.S. Rafael Peralta, patrolling as close as 41 nautical miles from China’s maritime boundary, almost in sight of the city of Shanghai.

Earlier in the day, an Air Force Northrop Grumman E-8C reconnaissance plane (hex code AE1492) and a Navy Lockheed Martin EP-3E (hex code AE1D8A) reconnaissance aircraft surveilled China’s Fuijanese coast, the latter coming within 58 nautical miles of its boundaries before turning back. Today, the EP-3E was back, this time going west, following the coastline of China’s most populous province, Guangdong. The moves are believed by Chinese experts to be information gathering operations, attempting to track the positions of Chinese submarines and to pinpoint Chinese coastal defenses as the United States increases the tension on Beijing.

US Navy P-8A operating near #Shanghai, with USS Rafael Peralta sailing underneath, July 26.
Might be a joint-operation? pic.twitter.com/vm7REvY14U

The U.S. military is currently conducting extensive wargames with Japan and Australia in the Philippine Sea, aimed at better training those involved for a future war with China. Those wargames do not appear to be a part of the maneuvers off of China’s coast. Defense Secretary Mark Esper recently accused the People’s Liberation Army as “continuing its aggressive behavior in the East and South China Seas,” stating that the U.S. was there to “deter against coercive [Chinese] behavior.”

The United States is also beginning to sever diplomatic relations with China. Last week, the Trump administration ordered the Chinese consulate in Houston to close, claiming it was a hub of spying activity.  Diplomats and embassy staff were jeered and heckled as they left for the final time, The Guardian reporting that American officials forced entry to the building, potentially a serious breach of international law. In retaliation, China ordered an American consulate in Chengdu to close. Going further, Florida Senator Rick Scott recently claimed every Chinese citizen in the U.S. is a Communist spy, arguing that foreign students should be treated with extreme suspicion.

American policymakers increasingly see China as a threat to U.S. hegemony. In 2011, the Obama administration announced its so-called “Pivot to Asia,” an attempt to encircle China with military bases in an attempt to crush it. This has been continued by Trump, who has consistently portrayed China as a U.S. enemy. The Pentagon’s 2021 budget calls for a move away from the Middle East and a focus on East Asia as America’s “priority theater.” The government has also attempted to shift both domestic and international blame for the COVID-19 pandemic onto China, Trump missing no opportunity to call it the “Wuhan China Virus.” The president has even committed the U.S. to leave the World Health Organization over its refusal to comply with censuring China.

While there has been no active fighting, the online information war is already raging. Last month a U.S.-funded think tank managed to convince Twitter to delete over 170,000 accounts sympathetic to China and its government, while the government is also considering outright banning the popular (Chinese-owned) video app TikTok. “I don’t want to get out in front of the president, but it’s something we’re looking at,” Secretary of State Mike Pompeo told Fox News.

The negative media coverage appears to have had a profound impact on public opinion. Just nine years ago, Americans’ views on China were strongly favorable, but a recent poll conducted by the Pew Research Center found that a record 66 percent of the country now hold negative opinions about the country, only a quarter continuing to hold China in high regard.

Can you imagine the absolute freakout that would take place if the Chinese military was operating this close to New York, off the US coast?

The US engages in these dangerous provocations against China on a weekly basis, but it is China that is always painted as the “aggressor”. https://t.co/KzBJdaJhXf

While the activities of the U.S. military are noteworthy and potentially inflammatory, they are not unique. Indeed, only last month, it launched a similar operation off the coast of Venezuela. Describing it as a “freedom of navigation operation,” the U.S.S. Paul Nitze sailed within almost 12 nautical miles of the Venezuelan coast, accompanied in the sky by a Boeing RC-135W reconnaissance plane, with some postulating that the move was an attempt to gain information on the country’s coastal defenses in the light of an oft-rumored possible invasion, something President Trump reportedly stated would be a “really cool” thing to do.

In 2016 former senior Trump advisor Steve Bannon said that “We’re going to war in the South China Sea in five to 10 years…there’s no doubt about that.” While anti-war activists everywhere will hope otherwise, recent events suggest he may have been on to something.

Greystone Nursing Homes, Whose Executives Gave $800,000 to Trump, Are Epicenters of Covid-19 Deaths

“An Ordinary Muslim” and the Clichés of Culture Clash on Stage