The Holy Land Foundation case, on which I based my book “Injustice, The Story of the Holy Land Foundation,” included five defendants, all of whom were wrongfully charged and wrongfully convicted. The five, Mufid Abdulqader, Shukri Abu Baker, Ghassan Elashi, Abdulrahman Odeh, and Mohammad Elmezain, were targeted because they were Palestinian Muslims. The U.S. government, along with the government of Israel, Zionist organizations in the United States, and the witnesses that helped the prosecution are all complicit in the crime of keeping these men in prison.

Trying to prevent a tragedy

Fearing that his deteriorating health conditions and advanced age make him a candidate for contracting COVID-19, a motion for modification of sentence based on extraordinary and compelling reasons was filed for Mohammad Elmezain on June 5, 2020. The government opposed the motion and June 23, 2020, Judge Sam Lindsay of the Northern District of Texas denied the motion.

The court arguments rely on false claims made during the Holy Land Foundation trial and ignore the severity of the health conditions of Elmezain.

The court claims it “does not downplay Defendant’s recent mini-stroke, physical limitations, and chronic medical conditions—diabetes, hypertension, arthritis or rheumatoid arthritis, numbness in his hands, high cholesterol, back pain, and a continuous skin rash—or discount that being confined in a prison makes it more difficult for him or any prisoner to follow official precautions for social distancing and handwashing while in custody. Defendant has failed, however, to provide sufficient grounds for compassionate release. He does not establish that his conditions are sufficiently severe, have an end of life trajectory, and diminish his ability to provide self-care.”

Furthermore, it ]makes the outlandish claim that:

Defendant, however, apart from his physical limitations, good prison record, and participation in educational programs, he offers no evidence of his rehabilitation efforts or any attempt to confront the primary motive for his offense, specifically his ideology of persistent violence.” 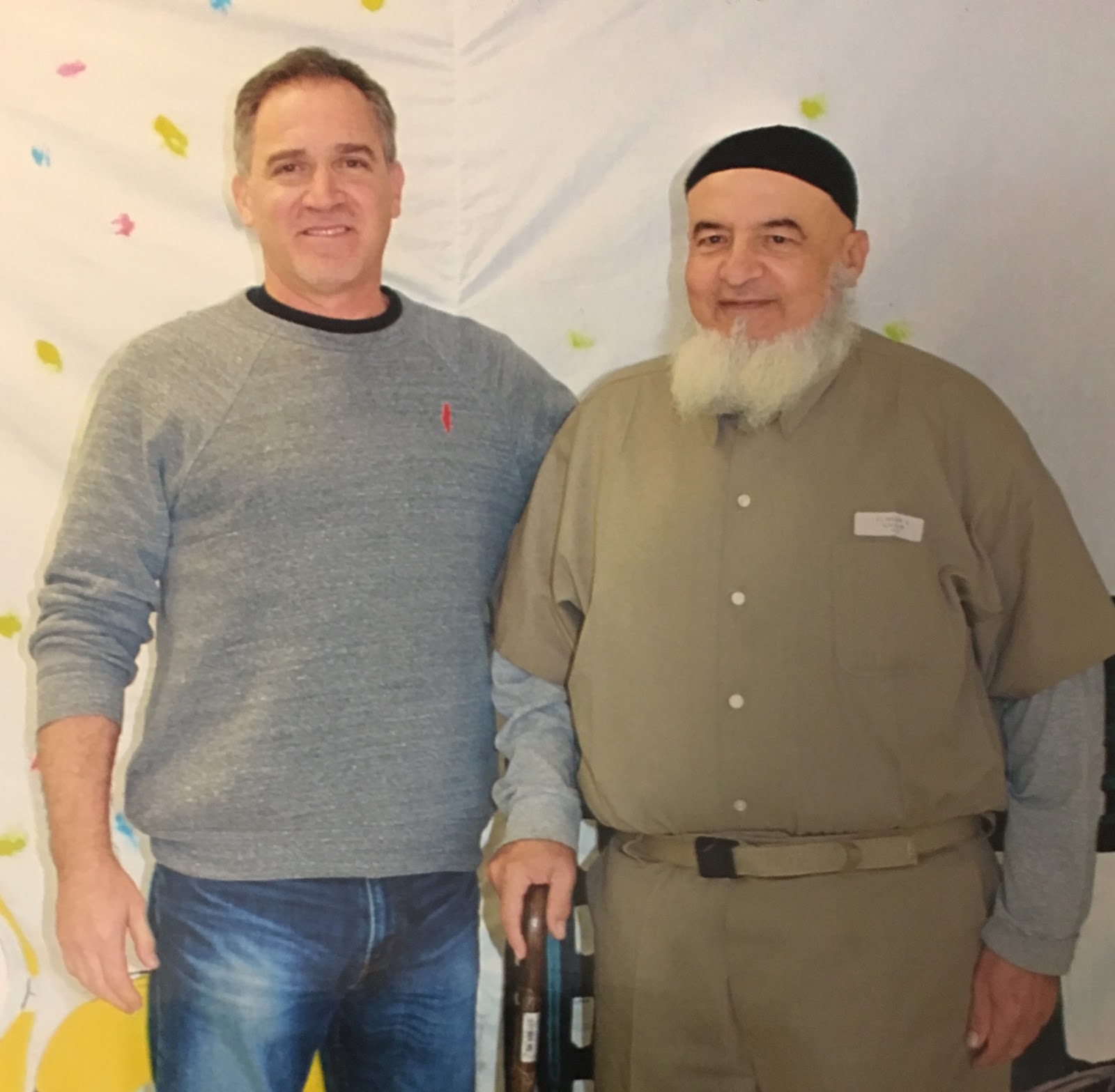 A short while after the court’s decision regarding the fate of Elmezain, Mufid Abdulqder, another of the Holy Land Five Foundation defendants, tested positive for COVID-19. When I heard the news, my first thought was that if anything happens to him, if God forbid he does not recover, not only would the U.S. government and the judge in the case be to blame, but the Anti-Defamation League (ADL) and the entire Zionist apparatus in the United States would be responsible. My second thought was, how much can a good man suffer and still maintain his humanity.

Mufid is a tall man with broad shoulders and a keen sense of humor. “I work out two and a half hours every day, and I take only one day a week to rest,” he told me during one of my visits. He lets his gray beard grow long and he has his hair cropped very short, giving him a slightly wild and mischievous look. He is in his early sixties and has great plans for the future. “I plan to be fit and rich when I get out,” he explained, “if you don’t set goals and take care of yourself, no one will do it for you.” 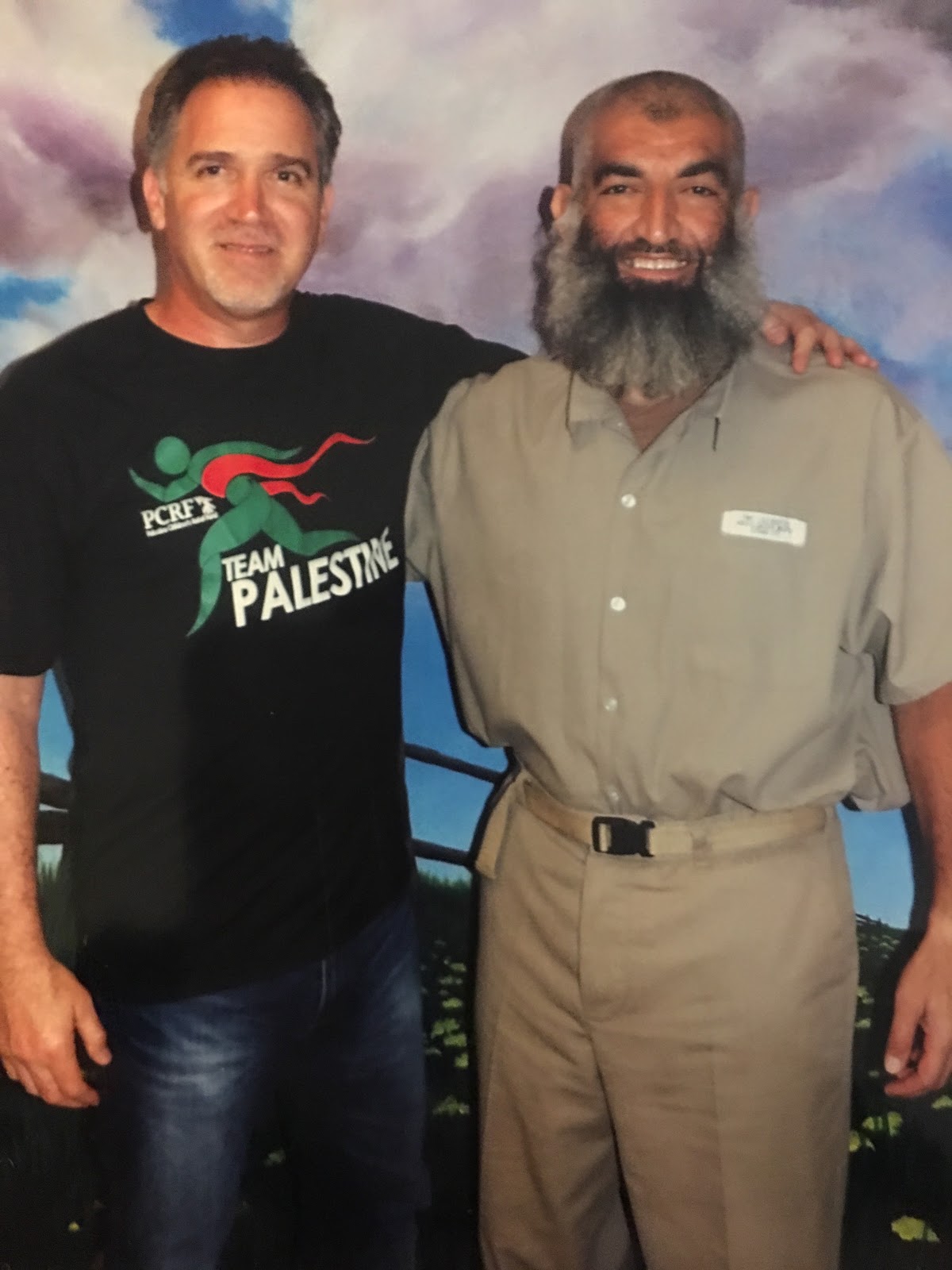 Each time we met we would sit together and talk for hours, not feeling the time pass. From time to time, I would get us some snacks from the vending machine and we would eat and go on talking. He is a great storyteller and even though he is only a few years older than me, his life is rich with stories which he shares generously. In fact, once I got to know Mufid, it became obvious to me that generosity was one of his strongest characteristics.

Mufid Abdulqder, like the rest of the Holy Land Foundation Five, is an inmate in federal prison because he is Palestinian and Muslim, and was targeted for political reasons. Had he been any other nationality or religion he would be a free man. As he and I sat in the visitation room of the federal prison in Terre Haute, Indiana, he told me about his life and his family in Palestine. His family is from the town of Silwad, where his family home still stands. I visited the town and saw the house myself. Silwad is set on a hill and it has some of the finest views in all of Palestine. 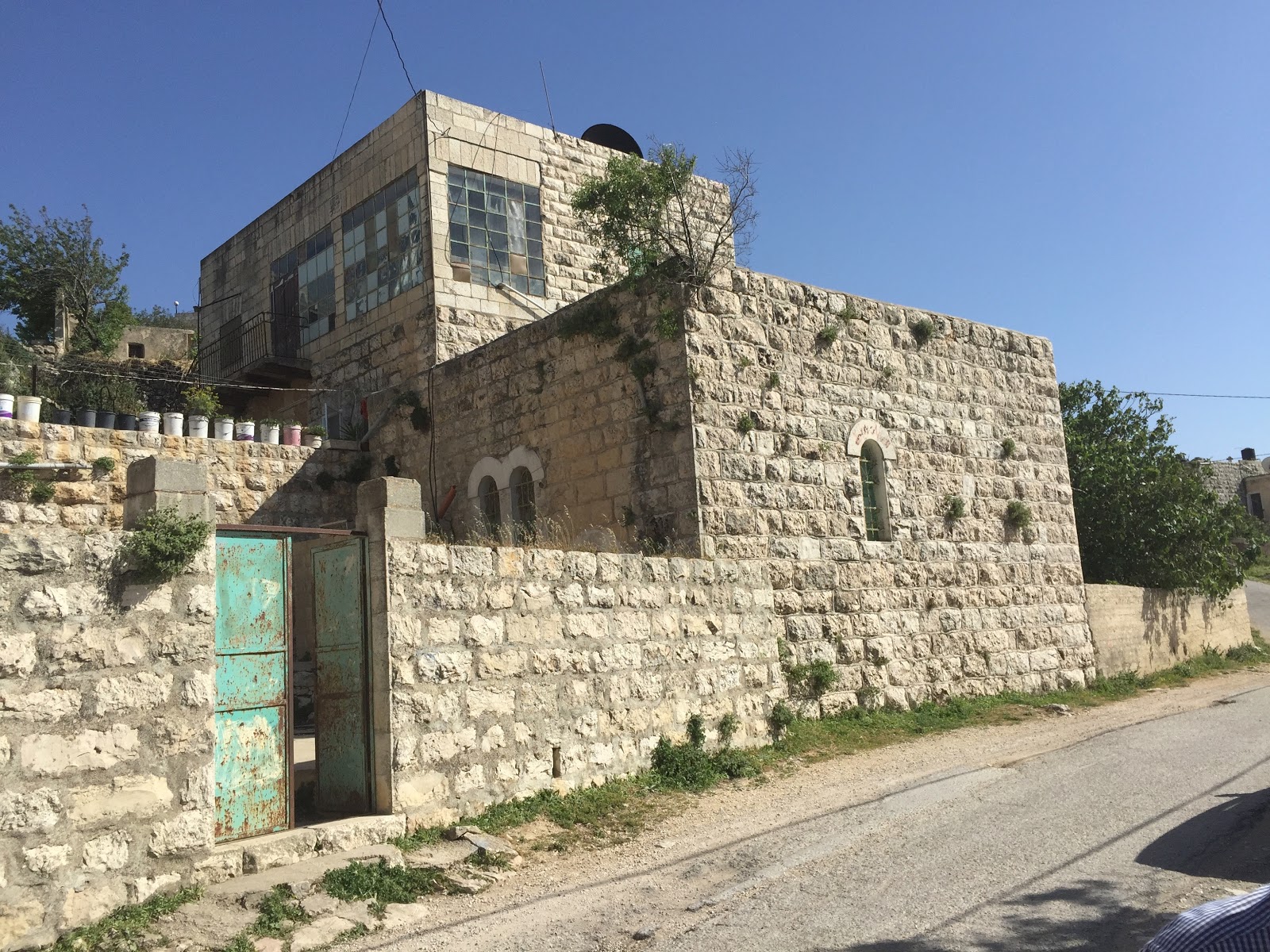 Mufid’s brother is the former head of Hamas political bureau, Khaled Mash’al. My book provides a detailed report of how and why Mufid ended up in prison, but suffice it to say that when the U.S. government needed to demonstrate that it was “fighting terrorism,” the Holy Land Foundation was an easy target, and Mufid, although he was not part of the organization and only volunteered from time to time, was targeted because of his family connections.

Since the outbreak of COVID-19, Mufid has been actively writing and warning about the risks to himself and other inmates. Here are a few excerpts from his emails:

Today is Friday, 6/26 and things got worse than before.  So far we have a minimum of 12 inmates as of right now who have tested positive for the CPVID-19 [sic].  I hope and pray  that I will not catch the COVID-19 virus.

Today is my birthday and I am 62. We have so far well over 100 cases of COVID-19 among inmates and 3 staff.  The virus is spreading like fire and who knows who will be next.  There is no social distancing for 270 inmates in a building using the same bathrooms, sinks, showers, phones, computers.  Each 5 live in a room no bigger than 8X6.

He then added the following plea:

Please call, e-mail, write, text MLFA.  Call Khalil and tell him to tell Charlie (my attorney) to file an emergency motion with the court for me for home confinement.  Over 50 inmates in the past 3 months have been successful with getting out as the judges see that the BOP is not doing enough and the judges are releasing inmates with 10 and 15 years left on their sentences.  I have already served 12 years and the most they can keep me in prison is 4 more years.  Time is running out.  I don’t want to come out dead after serving 12 years on political charges.

It bears down on me…I can’t breath.  I am holding on for life, suffocating under the crushing anxiety of this invincible enemy called COVID-19.

Yesterday the results of the test came back.  I have COVID-19.  I was moved from my building to another building where everyone has the virus.  So far I would say close to 500 inmates do have the virus.  BOP just moves you from one spot to another and hopes that you will be ok and you will beat the virus.  Over 102 inmates so far have died from the virus.

I am ok and I will make it Insha Allah.  I am in a room with 12 other inmates who have it and one of them is coughing uncontrollable all night long and they gave him Advil.  Keep me in your prayers.

To all honorable human beings who stand for a free Holy Land Palestine, Jerusalem and my beloved great hometown of Silwad I want you to know that I do have the COVID-19 and  I do have symptoms such as coughing, chills, runny nose/congestion, shortness of breath, diarrhea and I am fighting every second of my life and winning Insha Allah.

As of today Friday as reported by channel 8 ABC local TV station at 5:30 PM . Seagoville prison has 1077 inmates infected at a rate of 74% of all inmates with one staff death.  Scary!!!!! 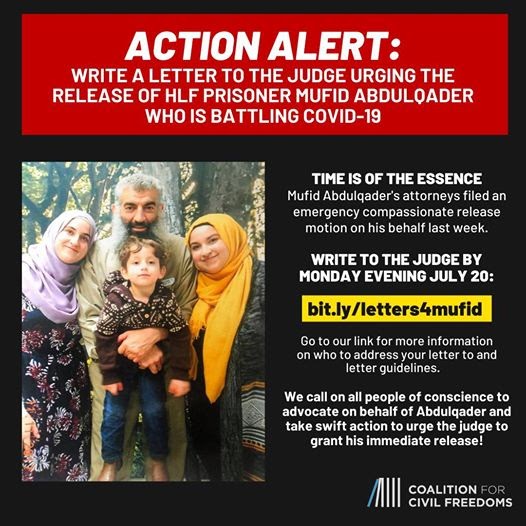 A poster from the campaign for Mufid Abdulqader’s early release

In an interview that Mufid’s daughter Sarah gave to the Coalition for Civil Freedoms, she mentions the appalling conditions and lack of care for the inmates by the Bureau of Prisons. “These people have families, and while my dad is innocent, even the others, are they not human beings, do we not need to care for them?” she asked.

The answer is that the lives of inmates in America do not matter. The prison system in the United States is created to punish inmates and then to continue to punish them throughout their incarceration. It is a cruel and unusual system and should be abolished.

As of the writing of these words, a motion for compassionate release has been filed on behalf of Mufid. The government has fourteen days to respond.