My father, the late IDF general Matti Peled, called for a two-state solution in 1967, and as is stated in…

My father, the late IDF general Matti Peled, called for a two-state solution in 1967, and as is stated in my book, The General’s Son, Journey of an Israeli in Palestine, he continued to campaign for this “solution”  until the day he died. It may have been a revolutionary idea then, especially coming from a retired IDF general. Some would even call it progressive, though I personally would not go that far. It presented a path for Israel to gain legitimacy for its 1948 conquest of Palestine while placating the Palestinian people by giving them a small, powerless state that would allow them to exercise their right to self-determination.

Two decades later, when it was clear that Israel would never allow this to happen, my father called for the U.S. to halt its financial and military aid to Israel. By 1992, he called for sanctions against Israel. So when Bernie Sanders and other so-called progressives like J Street talk about a two-state solution and the possibility of using aid to pressure Israel, they are decades late and billions of dollars short. Without full support for the Boycott Divestment and Sanctions movement, BDS for short, no progress can be achieved for Palestinian rights.

Back in the late 1960s and early 1970s calling for the establishment of a Palestinian state in the West Bank and the Gaza Strip was dangerous because there was a real possibility that it could happen. Today, after five decades in which consecutive governments of Israel have worked tirelessly to integrate the West Bank with the rest of the state of Israel, a Palestinian state is no longer possible and calling for it is a safe political move. Bernie Sanders knows it, the folks at J Street know it, and all the other so-called progressives know it too.  A bold, progressive move would be to call for a democratic state with equal rights for all of Palestine, from the river to the sea.

However, we mustn’t get ahead of ourselves. One has to ask, where were these progressives when the possibility of a two-state solution was feasible? This is not to say it was a just or good solution, for it did legitimize the Zionist crimes of 1948 and earlier. Setting that aside for a moment, where were these so-called progressives when the possibility of an independent Palestine emerging in the West Bank and the Gaza Strip was a real possibility? They were nowhere to be found.

While the official line of consecutive U.S. administrations was that UN Security Council resolutions 242 and 338 should be the basis of a peace agreement, neither the various administrations or other American politicians outside of the administration did a single thing to push this idea forward.

Now that is it too late, and it is clear that Israel never intended to allow the Palestinian right to self-determination to materialize, and now that we know that the “peace process” concocted by the Rabin-Peres duo was nothing more than a charade, the Bernie Sanders and J Street liberals decided to make a “bold” statement out of an old, outdated idea. But there is nothing bold about their support for Israel. There is nothing progressive about waiting five decades to support an idea that has no chance of becoming reality.

A Step in the Right Direction

The last thing that can be said about this very slow learning curve is that it is a step in the right direction. Recognizing and declaring today that the Palestinian people have been subjected to genocide, ethnic cleansing and apartheid for over seven decades is still slow, but it would signal a real step in the right direction. However, neither Sanders nor his hosts at the J Street conference are willing to go that far.

The farthest Sanders is willing to go is to say that he supports Israel and that Palestinians have been treated unfairly. Now, he is suggesting that some of the $ 3.8 Billion of aid money going to Israel should be diverted to resolve the ongoing humanitarian crisis in Gaza. How much? He didn’t say. So why not suggest halting aid to Israel altogether and sending those billions of dollars to the people who really need them in order to rebuild Gaza and provide medical care, water, and food.

The problem is that we have all become accustomed to believing that Palestinians should never ask for too much. Palestinians should be grateful for the scraps offered to them by white rich politicians in the United States and Israel. They should welcome the idea that Israel will “give” them a fraction of their homeland in which to build a mini-state. They should be grateful that a politician in the U.S. said publicly that they are treated unfairly. Palestinians should not be unreasonable and they should refrain from calling for anything that would bother Israel and its Zionist supporters around the world.

The call for Boycott, Divestment, and Sanctions against Israel is a step too far for Sanders and J Street, the latter claiming that it is opposed to the call for a boycott and that “The Movement is not a friend to Israel.”

I asked @SenSanders about Palestine, the BDS movement targeting Israel, and whether he supports a one state solution pic.twitter.com/xOQmxMelFp

Palestinians, apparently, are required to prove that they are friends of Israel before their demands can be heard, much less accepted and also to recognize the right of Israel to exist, another absurd demand regularly made of Palestinians.

The fundamental problem lies in statements such as this by J Street: “J Street believes that maintaining a strong, vibrant US-Israel relationship […] US support for Israel as a democracy and a national home for the Jewish people is an historic and crucial commitment.”

As long as the U.S. relationship with Israel is viewed as more valuable than the human rights of the Palestinian people, justice for Palestinians will remain a distant dream. Without support for BDS and their declared demands, namely: ending Israel’s military occupation of Palestinian land, equal rights and the right of refugees to return to their homes and their land, no progress can be made.

Reading posts on Twitter while the J Street conference was taking place in Washington could give one the impression that justice for Palestinians is just around the corner. However, it is Israel that was the focus, not Palestinian human rights. The ongoing discussion of the two-state solution at the event acted as a fig leaf, shielding Israel from true criticism and allowing human rights violations in Palestine to continue unabated.

Statements like this one, made by Julian Castro, are indicative of a prevailing head in the sand, ostrich-like attitude: “We need a government in Israel that will get back on the path of the two-state solution.” No one bothered to ask if Israel was really ever on that path. 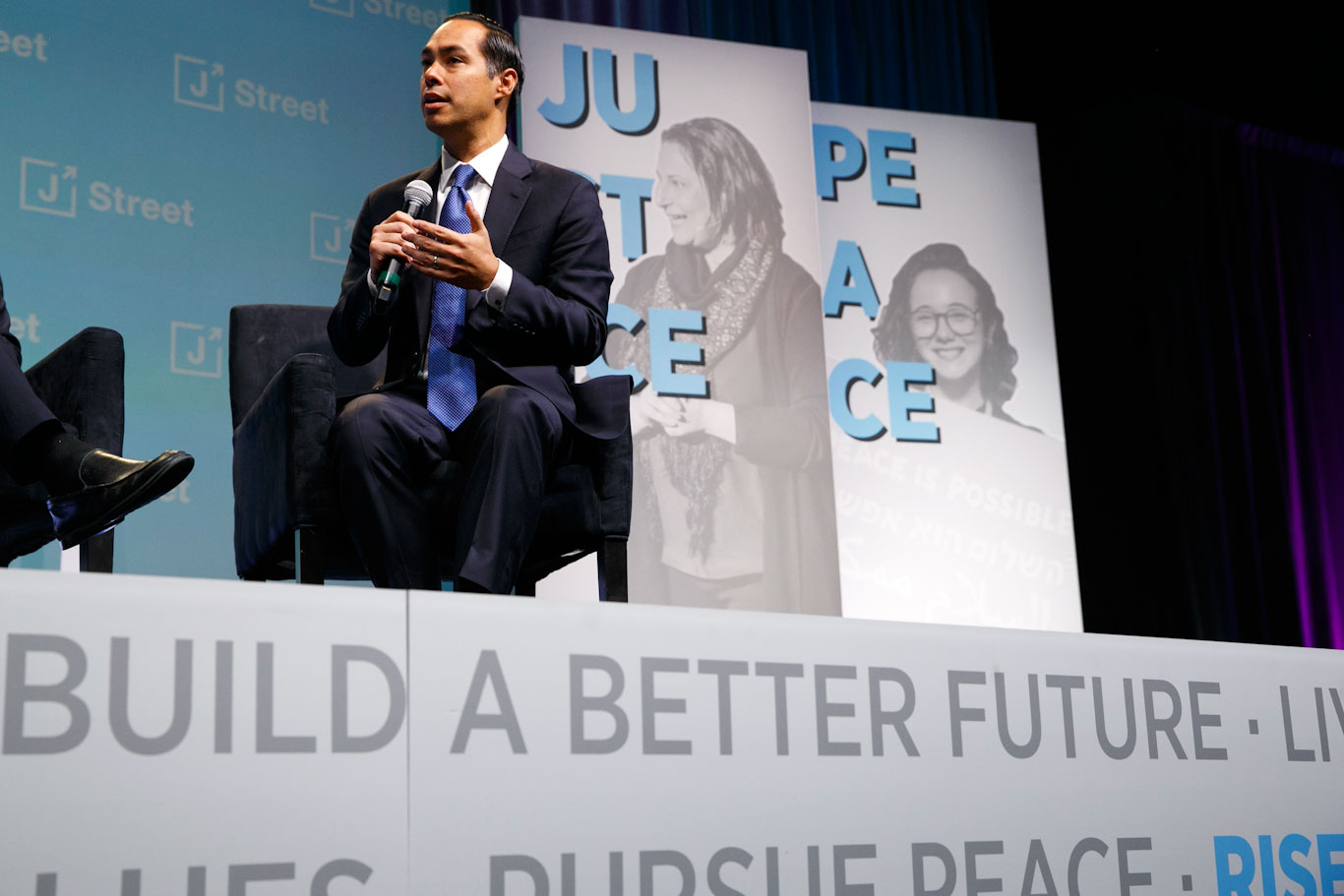 Bernie Sanders made a statement at the J Street conference that was also indicative of a desire to intentionally miss the target: “It is not anti-Semitism to say that the Netanyahu government has been racist – that’s a fact,” he said. Netanyahu is, without question, indeed a racist. Yet he is no different than any other Israeli prime minister. The issue is not a single prime minister, it is the entire Zionist settler-colonial project in Palestine which is the problem.

More than five decades had passed since my late father, one of the exalted IDF generals of the 1967 war, called for a two-state solution. A solution that favors Israel and recognizes very limited rights for Palestinians and is a poor excuse for a peace plan. A solution that ignores the crimes which my father, among others, committed in 1948. A solution, which in fact legitimizes those crimes. It is a “solution” behind which politicians who want to seem progressive can hide because it offers no solution. It is a solution popular among those who pretend to care for justice and human rights but that do not want real change. One must ask how much longer this charade will be allowed to continue.