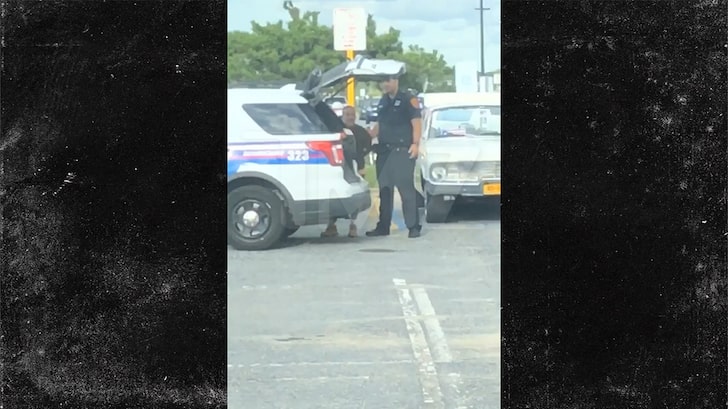 6:01 PM PT — A spokesperson for Suffolk County, NY tells TMZ … “Third Precinct Police Officers were doing a patrol check of the Bay Shore Marina when they observed a man shouting at people, swinging a small bat and causing a disturbance at approximately 5:45 p.m. The man was transported to a local hospital for evaluation.”

The angry short guy who threw a fit in a Bagel Boss shop a month ago is all fired up again — only this time, it landed him in cuffs.

Chris Morgan was restrained by cops Sunday at Bay Shore Marina in New York, where eyewitnesses say he’d allegedly gotten into it with another guy just moments prior. Police were on the scene and pounced — and most of it was caught on camera.

You can see the officers tell Chris to lay on his stomach and get his hands behind his back. He complies, mouthing off throughout the whole ordeal.

Chris was placed in cuffs and led to a police cruiser — you see that here in video TMZ obtained. It’s unclear if he was placed inside, or if he was arrested or not — we’re working on getting more details now. Point is though … this is a bad look.

Of course, Chris has been riding his 15 minutes of fame since his viral meltdown in the bagel shop, where he lost his cool over a number of things, including lady troubles. As we’ve noted, he’s had a long history of public confrontations and face-offs with folks.

Chris has since signed on to partake in a celebrity boxing match with Lenny Dykstra, who’s already taken some personal shots.

No word yet on whether this is gonna affect Chris’ boxing deal.