SAADA, YEMEN — In explaining a much-lauded move, President Joe Biden said that the reason the United States was removing…

SAADA, YEMEN — In explaining a much-lauded move, President Joe Biden said that the reason the United States was removing Yemen’s Ansar Allah movement from the Foreign Terrorist Organizations list was to avoid exacerbating the humanitarian situation in the war-torn country and to allow much-needed aid to reach local residents. Yet images of children with jutting ribs, swelling bellies, and loose skin that have come to symbolize the war for the past six years can still be found all over Yemen.

Four-year-old Gharam Sha’ib stands at a bed covered with blue sheets in Hayden Rural Hospital in the northern Governorate of Saada. She is bare-boned with haunting eyes wide open and the outlines of her ribs are clearly visible through her skin. The malnourished girl arrived at the hospital this week from the Al-Sumayk village in western Saada, an area far removed from the waves of famine that have washed over Yemen in the past six years.

Gharam’s mother, who was hiding a tired face and emaciated body in a voluminous black abaya robe and hijab, recounted her story to MintPress as her arm was wrapping around her daughter`s stick-thin body: “There is not enough food, no aid organization or person to help us. It was the 50,000 YR ($ 85 U.S.) fare we received that saved my child.”

The farmer’s wife struggles to feed her children amid the soaring prices of food, fuel and medicine. She said that her life has turned to hell since the beginning of the year. ”I am now in my thirties. I have never faced circumstances worse than now. What have we done to America and Saudi Arabia to deserve this! I ask God not to forgive whoever caused this,” she said, crying.

Gharam was lucky, as she was discovered by a health worker and then transported to the hospital at the administration’s expense with assistance from Doctors Without Borders. Salah Radwan, the director of the Health Bureau in Haydan, told MintPress that because of the blockade malnutrition is widespread in Saada. “There are hundreds of children in the district suffering from severe malnutrition, but unable to arrive at the hospital because of the high cost of transportation,” he said.

Even worse under Biden

Symptoms of severe acute malnutrition — the most extreme and dangerous form of under-nutrition — include jutting ribs and loose skin, with visible wasting of body tissue. Swelling in the ankles, feet and belly, as blood vessels leak fluid under the skin, are other symptoms. During the six years of war, thousands of Yemeni children have borne these symptoms. But since Biden promised to end the war on humanitarian grounds upon assuming power in January, painful scenes of thousands of children with symptoms of acute malnutrition have been recorded in new areas where no cases were previously recorded, and at a higher rate than even during the era of former President Donald Trump, according to Yemen’s local health sources. 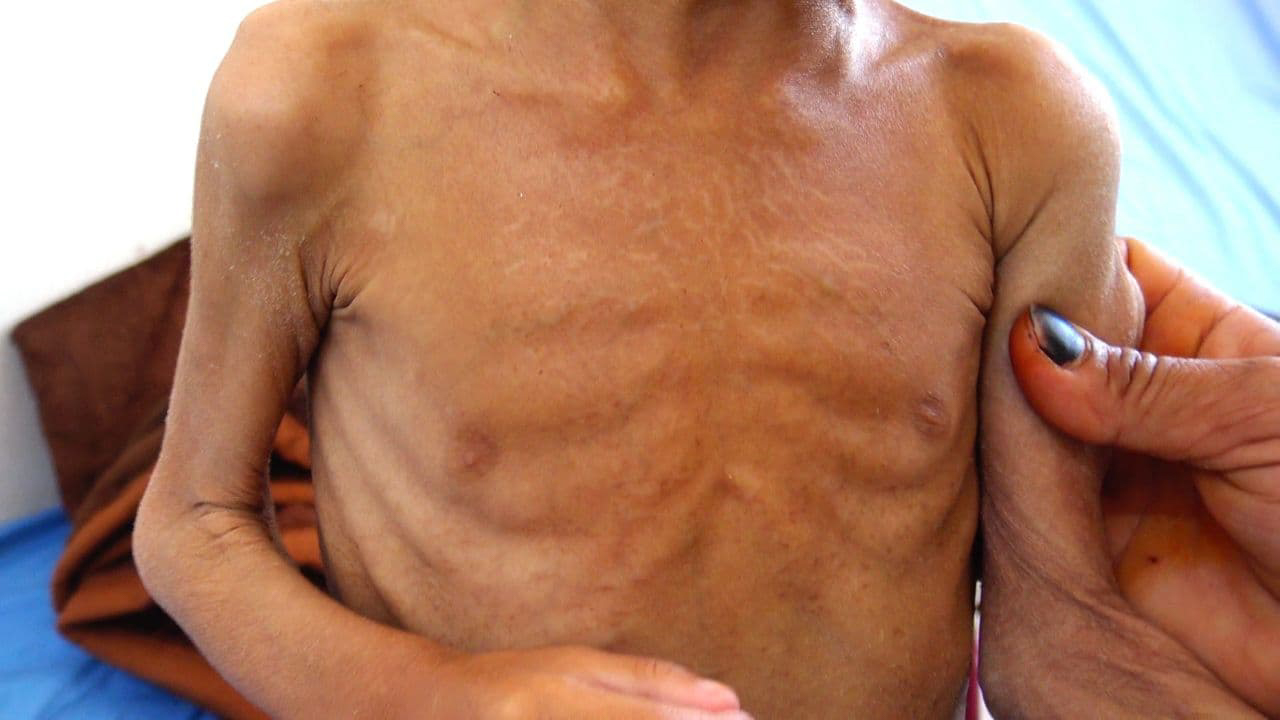 The same source said, in a statement given to MintPress, that many districts in Saada, Amran, Hajjah, Hodeida, Aden and Lahj provinces saw record jumps in the number of malnourished children this year, with at least 100,000 cases of severe acute malnutrition in the first three months of the Biden presidency alone. That number represents a massive increase from the same period at the onset of the Trump presidency, when 5,000 cases were recorded. This is likely because the blockade has continued unabated, according to officials.

In fact, the average Yemenis daily caloric intake is only 800 calories. This is insufficient even for small children, leading to a slew of disorders related to malnutrition – scurvy, tuberculosis, dysentery, rickets, marasmus, as well as wasting and stunting across Yemen. Official statistics attribute nearly 70% of deaths in the country to starvation caused by the blockade. Famine also opens a new window to Covid-19, which is inevitably causing disproportionate suffering among those already weakened by malnutrition and related diseases.

The Ministry of Health in Sana’a said in March that “more than 2.6 million children under the age of five suffer from acute malnutrition, and other 500,000 children are threatened by severe malnutrition due to the blockade.” The ministry confirmed that the Saudi blockade has caused an increase in the death rate of children under five to 300 per day. While more than 8,000 women die from it annually, 1.8 million women suffer from malnutrition and another million from complications from the effects of the blockade.

No relief from blockade’s strangulation

In February, four United Nations agencies — including the Food and Agriculture Organization of the United Nations (FAO), UNICEF (the United Nations Children’s Fund), the World Food Programme (WFP), and the World Health Organization (WHO) — said that nearly 2.3 million children under the age of five in Yemen are projected to suffer from acute malnutrition in 2021. Of these, 400,000 are expected to suffer from cases so severe that they could lead to death. The groups warned that these were among the highest levels of severe acute malnutrition recorded in Yemen since the escalation of conflict in 2015. “This is exactly what is going on thanks to the blockade supported by the Biden administration,” Dr. Ali Askar, the manager of Haydan rural hospital said in frustration.

In March 2015 when the war began, Saudi Arabia, supported by the United States, moved immediately to strangle the supply of raw materials and foodstuffs into Yemen. Now, armed with a list of 100 banned items, Saudi naval ships, supported by the U.S. Navy, are still patrolling the seas around Yemen, intercepting and detaining thousands of merchant ships carrying food, fuel, and fertilizer that are vital to agriculture, under the guise of halting arms smuggling into the country. On occasion the ships are released after months of detention, carrying damaged goods. The ongoing naval blockade shows no signs of easing, despite recent talk of the U.S. ending support for the war and with it the suffering of 30 million in the war-torn country.

The restrictions imposed on Yemen are not just targeting the sea; the country’s airspace is dominated by the Saudi-led Coalition, which is preventing thousands of sick Yemeni civilians from seeking urgent medical treatment outside of the country. Thousands of wounded patients have died prematurely because they were unable to travel abroad for treatment. Much of Yemen’s own medical equipment, including in major cities, is obsolete and urgently needs to be replaced. Moreover, the almost total blockade of commercial shipments of medicine through the airport, coupled with the restrictions on imports through the Hodeidah seaport, has caused prices to more than double, making essential medicines unaffordable for most of the population.

So why the blockade?

On Wednesday, hundreds of trade union workers took the street in front of UN headquarters to condemn the blockade, demanding that the United States and its allies lift the blockade imposed on Sana’a International Airport and allow ships carrying fuel to reach the country in accordance with international law.

“I need to travel abroad for treatment of my children,” Mutahir Ali Zamal, a Yemeni father of four who participated in the protest said. His children all suffer from xeroderma, a skin disease caused by a lack of proper hydration. Dr. Abdullah Thawabeh, the general director of the Cancer Hospital in Sana’a, said that the disease has led to skin cancer in the children due to the presence of chemicals found in internationally prohibited munitions. 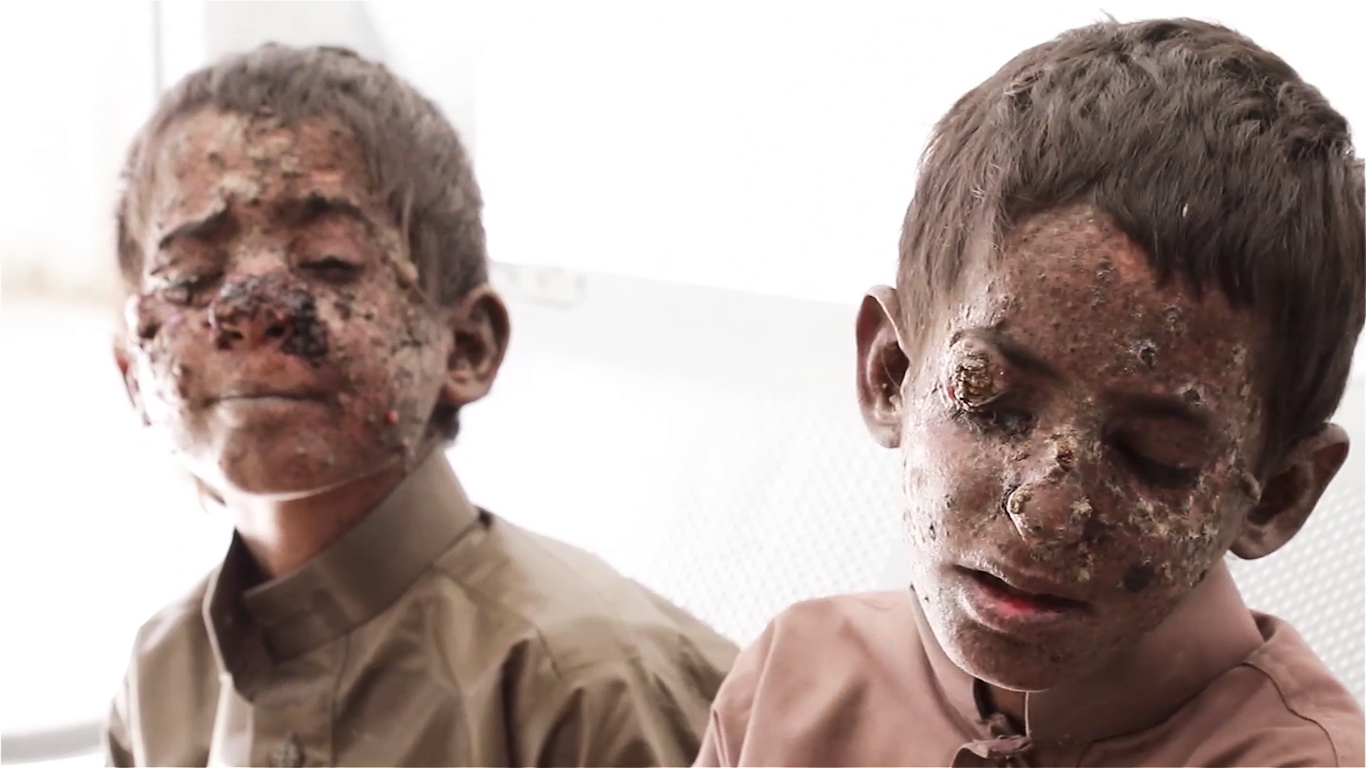 Mutahir Ali Zamal’s sons suffer from xeroderma, a disease caused by a lack of clean water and made worse by the war. Ahmed AbdulKareem | MintPress

Months ago, Saudi warplanes dropped a U.S.-made bomb near their home in Kitaf, north of Saada, as the children were playing nearby. In the wake of the airstrike, large brownish spots with darker speckles began to appear on their faces, according to their father.

Dr. Thawabeh said the hospital can not deal with the case because it lacks the necessary medicine and equipment due to the blockade, adding that the children must be evacuated abroad immediately. “America said that it removed Houthis from its terrorist list for us. If that was true, why were food, fuel, and medicine not allowed to reach us?” he asked.

The CEO of Yemen Petroleum Company (YPC), Ammar Al-Adrai, told MintPress that at least 10 oil tankers have been detained. The tankers, Al-Adrai says, have been held despite being checked, cleared, and issued permits by both the Saudi-led Coalition and the United Nations. He confirmed that the vessels are loaded with oil derivatives needed to run generators at hospitals, water pumping stations, and sewage plants.

Feature photo | A malnourished child is seen at the malnutrition treating ward of Al-Sabeen hospital in Sanaa, Yemen, on Nov. 24, 2020. Mohammed Mohammed | Xinhua via Alamy

Ahmed AbdulKareem is a Yemeni journalist based in Sana’a. He covers the war in Yemen for MintPress News as well as local Yemeni media.

Emboldened by Trump and Netanyahu, Jewish Settler Terrorism is Spiking