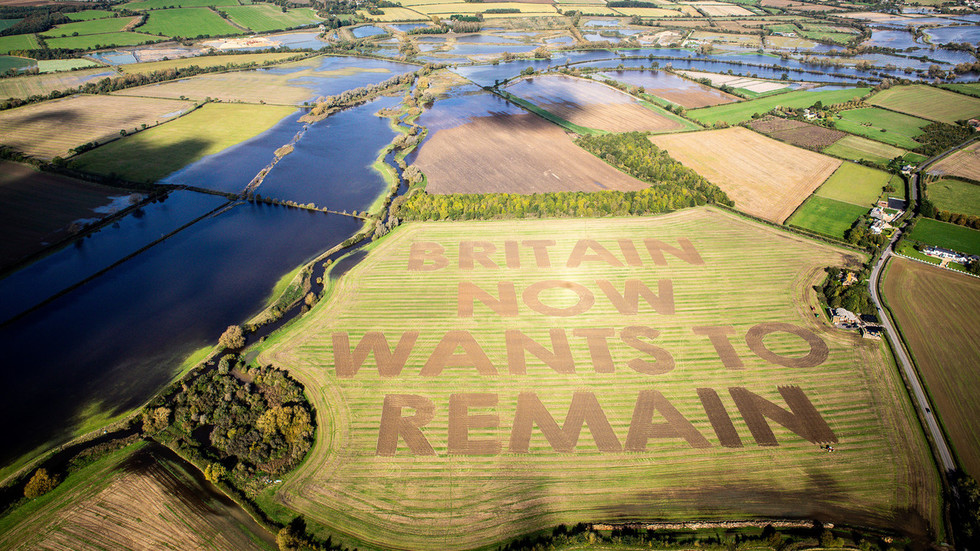 A dramatic anti-Brexit campaign video showing a farm tractor ploughing the message “Britain now wants to remain” and accompanied by a former Brexiteer revealing she has changed her mind on the intractable issue has gone viral.

Crowdfunded activist group ‘Led By Donkeys’, which has become notorious for creating billboards with seemingly hypocritical tweets of pro-Brexit UK lawmakers, published the video on Friday morning via social media.

Starting with a close-up of a tractor, and aided by highly emotive music, the camera then pulls out to reveal the message on the vast farmland in Wiltshire, with commentary from an angry former Brexiteer, who suggests that she has been lied to by politicians on Brexit.

I want my vote back. I’ve had my vote stolen and I want it back.

The intervention by the pro-EU campaign group comes on the eve of a momentous vote in the UK Parliament, when MPs will decide whether to back or reject PM Boris Johnson’s new Brexit deal he secured in Brussels on Thursday.

The video has provoked a huge response from fellow pro-EU advocates, with many insisting it was the group’s best stunt yet. One person revealed that it had reduced them to tears while watching it, claiming: “People looking at me like I’m a nutter on the metro.”

Brilliant. Crying in Rotterdam. People looking at me like I’m a nutter on the metro. Thank you for fighting.

While another person on Twitter jokingly suggested that it “should be shown on [a] big screen in [the House of] commons tomorrow.”

In September, a picture of Tory House leader Jacob Rees-Mogg reclining on the frontbench of the House of Commons was projected onto Edinburgh Castle by the anti-Brexit activists with the words “Lying Tory.”

Johnson needs 320 UK lawmakers to back his Brexit deal to see it pass, with the DUP and Labour stating that they’ll reject such a proposition. It will therefore depend on how many Labour MPs in ‘Leave’ Constituencies, ERG members, and former Tory ‘rebels’ expelled from the party, can be won over by the government whips.