Elizabeth Warren released a wide-ranging education plan Monday, pledging to invest hundreds of billions of dollars into public schools if… 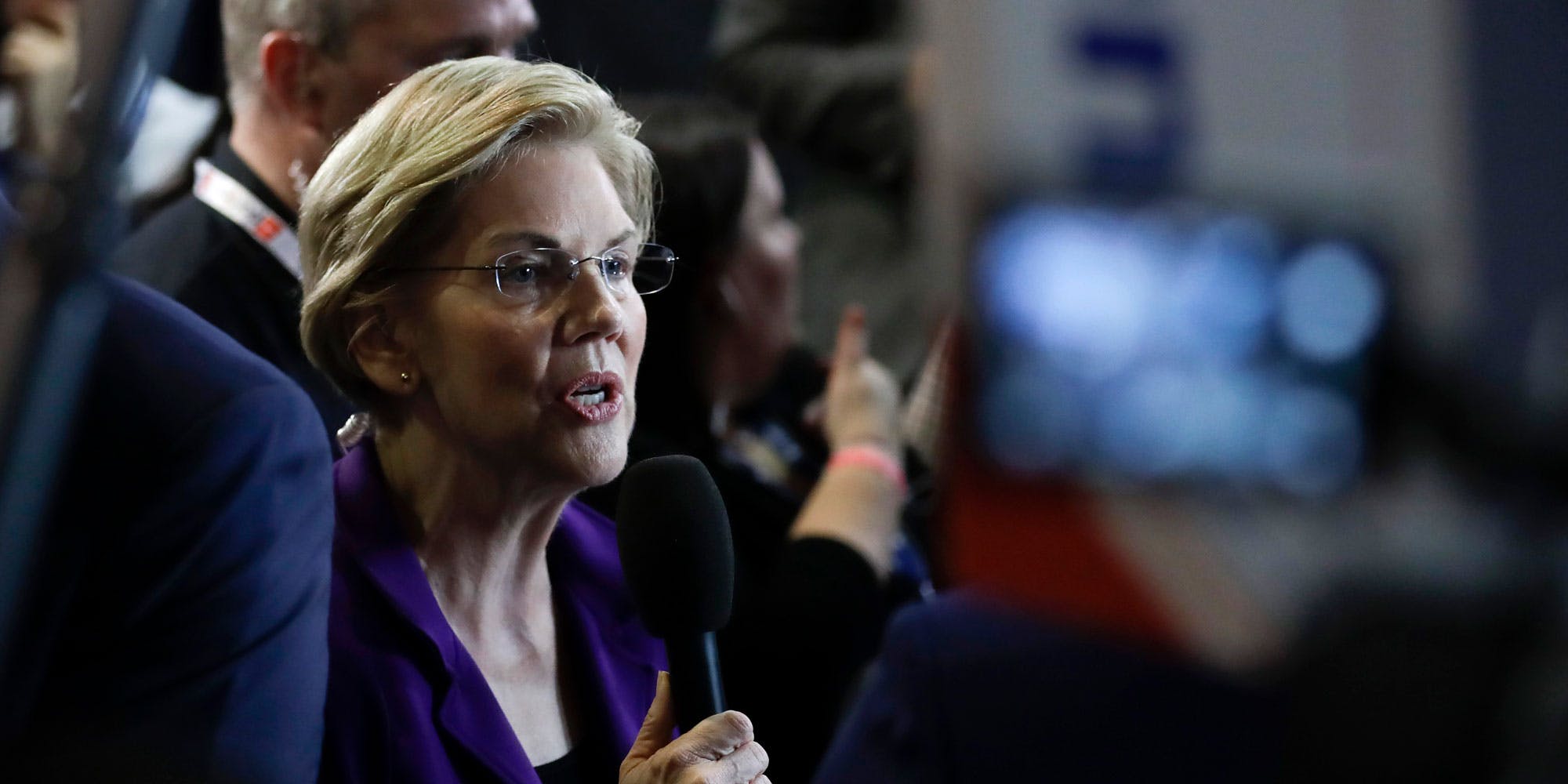 Elizabeth Warren released a wide-ranging education plan Monday, pledging to invest hundreds of billions of dollars into public schools if she wins the presidency, paid in part through her proposed two-cent tax on wealth over $ 50 million. Sen. Warren’s plan is infused with her broader campaign themes of reducing corruption and fraud; she backs measures like new taxes on education lobbying, limiting the profiteering of tech companies that sell digital products to schools, and curbing self-dealing within charter schools.

And it builds on some of her earlier campaign proposals, like pledging to appoint a former public school teacher as Education Secretary, supporting schools in teaching Native American history and culture, and expanding early learning opportunities for infants and toddlers.

In May, fellow Democratic hopeful Sen. Bernie Sanders’s own education plan sent shockwaves when he endorsed the NAACP’s call for banning for-profit charter schools and holding nonprofit charters to the same transparency and accountability standards as traditional public schools. In her new plan, Warren joins Sanders in embracing these positions.

Warren goes further than Sanders in calling not only for a for-profit charter school ban, but also extending the ban to any non-profit charter that “actually serve[s] for-profit interests.” Warren said she would even direct the IRS to investigate non-profit charters for potential tax status abuse and recommends referring “cases to the Tax Fraud Division of the Department of Justice when appropriate.”

Warren’s plan embraces some of the other bold ideas endorsed by her top rivals for the Democratic nomination, Sanders and former Vice President Joe Biden, and in some cases goes further than what they have proposed. For example, both Sanders and Biden pledge to triple the amount of federal funding for high poverty schools, known as Title I, from $ 15 billion to $ 45 billion. Warren’s plan commits to quadrupling Title I funding, and says she will use this new investment to press states to reform their own inequitable school funding formulas.

In her plan, Warren acknowledges that school systems which heavily rely on local property tax can shortchange students living in low-income areas. As of 2015, she highlights, only eleven states had adopted progressive school funding formulas, meaning those states allocate more money to students in high-poverty school districts than to students in affluent ones. The other 39 states either all gave students the same flat rate per-pupil, or students in high-poverty districts actually received less state support than their more affluent peers.

Warren says she would condition access to her new Title I investments on states increasing their own school funding contributions, adopting progressive state funding formulas, and implementing those formulas with fidelity. From a political perspective, the plan is likely to draw fire from the types of wealthy suburbs that have leaned toward Warren’s candidacy, and which she would likely need in Pennsylvania, Wisconsin, and Michigan to win the general election.

While Sanders’s Thurgood Marshall for Education Plan notes that school districts funded by local property tax can result in “unconscionable inequalities” — his plan only proposes to “rethink the link” between property tax and school funding. He calls for “establish[ing] a national per-pupil spending floor” but doesn’t say what that floor should be. This is in contrast to Sanders’s teacher pay proposal, which commits to a minimum salary floor of $ 60,000.

On the subject of school infrastructure, Warren also goes beyond her two top rivals in outlining how she would improve aging facilities.

Sanders’s plan pledges to “fully close the gap in school infrastructure funding to renovate, modernize, and green the nation’s schools” but doesn’t offer details. Biden pledges to include funding for school buildings in a larger federal infrastructure bill, but doesn’t estimate how much that investment should be. (Republican Sen. Susan Collins managed to defeat a measure to boost federal investment in school buildings last time the nation authorized significant infrastructure spending through the 2009 stimulus.)

Warren’s education plan commits to at least $ 50 billion in additional school facility funding, and notes that some of her other plans include funds for school modernization and repair, like the lead abatement grant program in her Environmental Justice package, and money for retrofitting and upgrading buildings in her Clean Energy Plan. The need for school infrastructure investment is substantial: a 2016 report estimated the nation underfunds school facility needs by $ 46 billion each year.

When it comes to issues around education reform, Warren — like most Democratic presidential candidates — has continued to back away from the charter school movement.

Up to this point, Warren has faced some heat over her positioning on charter schools. In a 2018 Senate hearing she praised the academic results of Boston charter schools — considered the highest-performing in the nation — and she has in the past said it’s the unregulated, unchecked growth of charters that she opposes. In 2016, Warren came out against a high-profile ballot initiative in Massachusetts that would have allowed charter schools to expand much more quickly in her state.

“Many charter schools in Massachusetts are producing extraordinary results for our students, and we should celebrate the hard work of those teachers and spread what’s working to other schools,” Warren said at the time. “But after hearing more from both sides, I am very concerned about what this specific proposal means for hundreds of thousands of children across our Commonwealth, especially those living in districts with tight budgets where every dime matters. Education is about creating opportunity for all our children, not about leaving many behind.”

This past January, when Los Angeles teachers went on strike partly over charter schools, her spokesperson told me that Warren “believes rapid charter school expansion can pose a threat to the financial health of traditional public school districts.” Sanders has adopted a largely similar stance – his presidential education plan criticizes the damage wrought by “unregulated charter school growth.”

Warren’s plan calls to end the diversion of tax dollars from traditional public schools through vouchers and voucher-like tax credits.

Details aside, Warren’s new education plan sends a strong signal of how her administration would think about not only charter schools but also other forms of school privatization.

Her plan calls to end the diversion of tax dollars from traditional public schools through vouchers and voucher-like tax credits. A campaign spokesperson clarified that this means both working to stop the expansion of voucher programs and working towards ending existing ones.

Biden and Sanders’s plans do not mention vouchers or tuition tax credits, though Sanders told The Washington Post that he would not support using public money in the form of vouchers or tax credits for private or religious school education, which he has a long record of opposing. Biden did not answer the same question when he was asked.

In her plan, Warren frames her opposition to the 2016 charter school ballot initiative as an example of “fight[ing] back against the privatization, corporatization, and profiteering in our nation’s schools.” She pledges to “go further” and now calls for eliminating a federal grant program used to promote new charter schools. She pledges to see if there are any other federal programs that subsidize new charters and would “seek to limit the use of those programs for that purpose.”

Both Warren and Sanders support helping charter teachers unionize, requiring that charter school boards include teachers and parents, and that charters be subject to greater oversight.

(Biden’s education plan makes no mention of charters, but he said at a campaign town hall that he wouldn’t support federal funds for for-profit charters, and he also criticized some charters for siphoning money from traditional public schools.)

Another major plank of Warren’s new education platform is around school desegregation, an area in which she again joins her top two rivals. She says school integration matters both because research shows it improves educational outcomes for students of all races, and because the Constitution’s guarantee of equal protection demands it.

Warren flags her own law review article, published in 1975, that criticized a Supreme Court ruling which made it harder to bus students for school desegregation. If that was a dig at Biden, there’s also one that appears subtly aimed at Kamala Harris’s record of criminalizing parents for student truancy, Warren’s plan pledges to “address chronic absenteeism without punishing parents or children.”

Notably, Warren calls out the generally whiter and wealthier districts that have attempted to secede from their more racially diverse school districts over the last two decades. “Under my leadership, the Department of Education and the Justice Department will subject any attempt to create a breakaway district to careful scrutiny and bring appropriate Title VI enforcement actions,” her plan states.

To tackle school segregation Sanders’s plan backs increased federal funding for “community-driven strategies” to desegregate, for school transportation, and for magnet schools. Biden, who has come under fire this campaign season for his work undermining school integration in the 1970s, has said he would provide grants to school districts to diversify schools, and reinstate an Obama-era guidance that supported schools in pursuing desegregation.

Lastly, Warren, Biden, and Sanders all make calls to increase the federal government’s commitment to funding the Individuals with Disabilities Education Act, the federal law which mandates services be provided to students with special needs. When the federal government passed IDEA in 1975, Congress pledged to finance 40 percent of its cost. But in practice, federal spending has hovered just under 15 percent, putting immense strain on states and local districts to support students with disabilities. Biden promised to “live up to our commitment” — meaning the 40 percent target — within 10 years. Sanders said he would provide mandatory funding covering “at least 50 percent” of the IDEA costs, and Warren in her new plan promises to meet the federal government’s 40 percent target, while also expanding IDEA’s investment to cover 3- to 5-year-olds, and early interventions for toddlers and infants.

This April 15, Don’t Fall for the Right’s Favorite Lie About Taxes