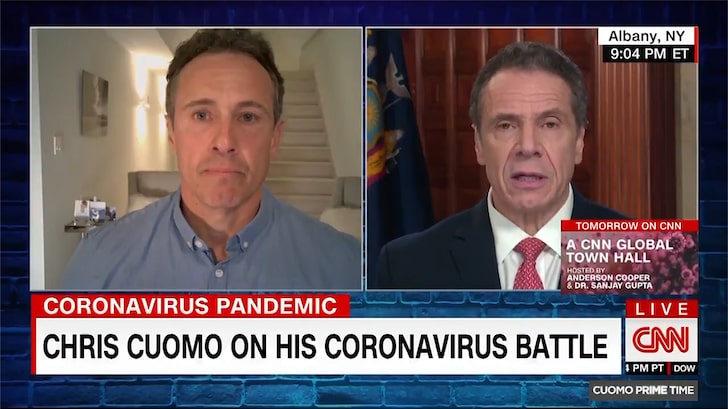 One of Chris Cuomo‘s biggest fears is now a reality … the CNN anchor says his wife, Cristina, has also tested positive for the coronavirus.

Chris was joined by his older brother, NY Governor Andrew Cuomo, Wednesday evening on his CNN show when he made the announcement. He said, “Cristina now has COVID, she is now positive, and it just breaks my heart. It is the one thing I was hoping wouldn’t happen, and now it has.”

The Governor and his bro discussed the fact it’s near impossible for only one family member to contract the virus … when they’re in the same house. Chris announced he had COVID-19 back on March 31, and ever since he’s been quarantined in the basement of his Long Island home … but still doing his show, most days, from there.

Chris — who’s battled severe symptoms over the last 2 weeks — said their 3 kids are all still healthy. He said he still has a fever but is hoping he can get better to help his wife if her symptoms get worse.

Of course, the CNN studio from which Chris usually broadcasts is in the heart of NYC, which has been the U.S. epicenter of the pandemic. His coworker, Brooke Baldwin, also tested positive.

The Cuomo brothers’ mother was living with Chris, but they moved her out as soon as they found out he’d tested positive.