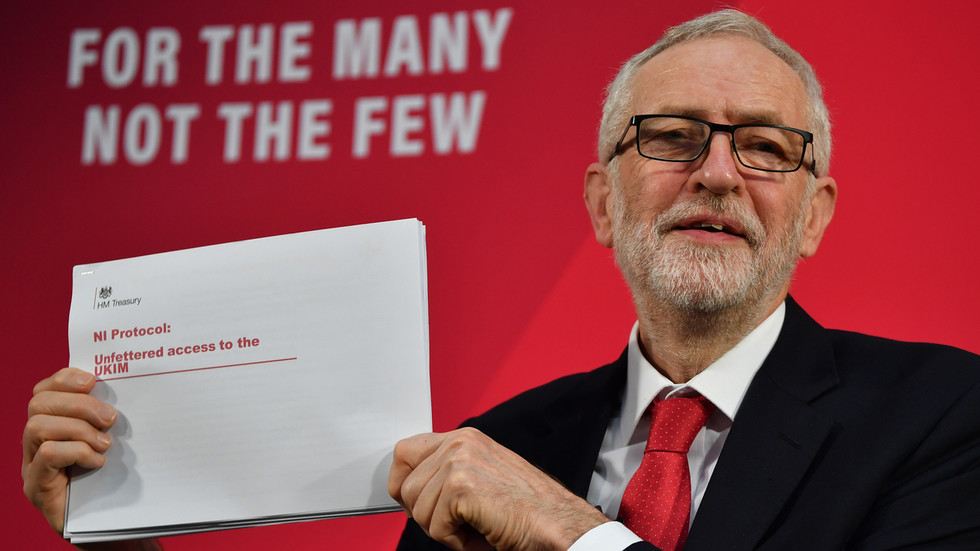 Jeremy Corbyn and Boris Johnson have traded blows after the Labour leader produced what he says is an official UK govt document that proves the PM’s Brexit deal will have damaging effects for the UK, especially Northern Ireland.

Addressing the media at a news conference in London on Friday, Corbyn held aloft the 15-page document titled: ‘NI Protocol: Unfettered Access To The UKIM’ (UK internal market), which he says was produced by the UK Treasury.

Corbyn claimed that the confidential report proves that Johnson was misleading the British public about his “oven ready” Brexit deal, and wanted the public to vote “blindly” for it by endorsing the Tories at this year’s general election.

Johnson hit back at Corbyn, dismissing the contents of the document despite admitting that he hadn’t seen it, branding claims that there will be customs checks on goods between Northern Ireland and Britain as “nonsense.”

The PM told reporters in Maidstone that there will be “no checks,” because the UK will leave the EU “whole and entire.” These claims appear to contradict what is contained within the report.

Corbyn was flanked by the Shadow Brexit Secretary Keir Starmer, who later tweeted a page from the secret document detailing that customs checks in Northern Ireland will be “highly disruptive to the NI economy.” It also suggests that 98 percent of NI exporters are “likely to struggle to bear this cost.”

❌ These are checks the UK Government is proposing, not just the EU or Ireland. ❌ Document shows 98% of NI exporters are “likely to struggle to bear this cost” pic.twitter.com/qu1VPg5Hcs

The Labour leader claimed the report was “cold hard evidence” that shows the impact of Johnson’s Brexit deal. “This drives a coach and horses through the Prime Minister’s claim there will be no border in the Irish Sea,” Corbyn added.

In November, Corbyn produced an unredacted 451-page UK-US post-Brexit trade talks dossier which he said was evidence of not only a “plot against our NHS,” but a “plot against our country.” He asserted that it proved without doubt that the UK’s public healthcare system is on the table in a Tory Brexit deal with President Donald Trump’s United States.