A video clip circulating social media appearing to show soldiers shooting a picture of Labour leader Jeremy Corbyn, is to… 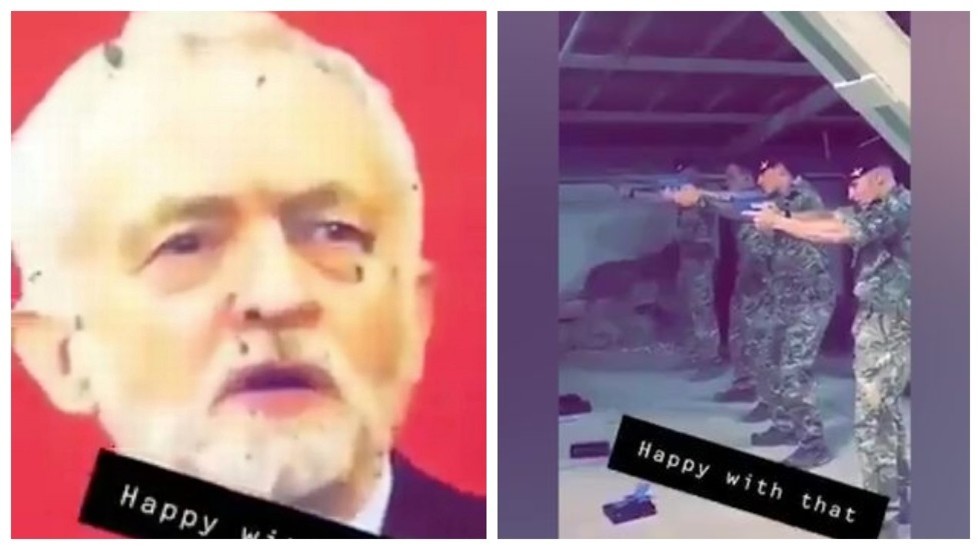 A video clip circulating social media appearing to show soldiers shooting a picture of Labour leader Jeremy Corbyn, is to be investigated by the British Army, according to the UK Ministry of Defence.

Ex-Army Sergeant, Trevor Coult, posted the footage on Twitter saying: “Not looking good for a Labour leader.” Coult has since deleted the 26-second clip that seemingly originates from Snapchat.

The Ministry of Defence confirmed that the video, showing British troops shooting a Corbyn image at a shooting range in Kabul, is genuine.

An army spokesperson has said that they are aware of the “totally unacceptable” behaviour of soldiers demonstrated in the video, which “falls well below the high standards the Army expects,” insisting that “a full investigation has been launched.”

The footage prompted outrage on social media with many reminding Coult that Labour MP Jo Cox was murdered less than three years ago. Some pointed out that other British lawmakers have also had threats on their lives and that this comes a day after a neo-Nazi was convicted of planning to murder a Labour MP Rosie Cooper.

Guardian journalist, Owen Jones, branded the behavior “absolutely horrific,” claiming it was yet more evidence of the “growing dangerous radicalization on the right” against the left and in particular, Corbyn. British musician Billy Bragg labelled it “shocking, whatever your political outlook.”

This is absolutely horrific, and speaks of a growing dangerous radicalisation on the right against Corbyn in particular and the left in general https://t.co/DtXbmQ21Wa

This video is terrifying. It’s been circulating on Twitter since last night, and shows what appear to be serving soldiers using a picture of Jeremy Corbyn for target practice. Deeply, deeply dangerous in this political moment. https://t.co/3vlhD6IcTK

If genuine, video of soldiers on a shooting range in Kabul firing at a target of Jeremy Corbyn, coming a day after a neo-Nazi was convicted of planning to murder a Labour MP, should be acted upon by the MoD. Shocking, whatever your political outlook.

Almost certain this is illegal but even if it isn’t against the law for uniformed military personnel to threaten death a Member of Parliament it’s undeniably fucking terrifying. Gentle reminder that Jo Cox was murdered by a “British patriot” less than 3 years ago. https://t.co/B26FrahwJl

Coult has since claimed the image of the Corbyn poster was photoshopped, claiming on Twitter that it’s a “pity it wasn’t real!” A tweet he has since been deleted.