The US government has approved the continued use of “cyanide bombs” to kill pests such as coyotes, foxes and dogs… 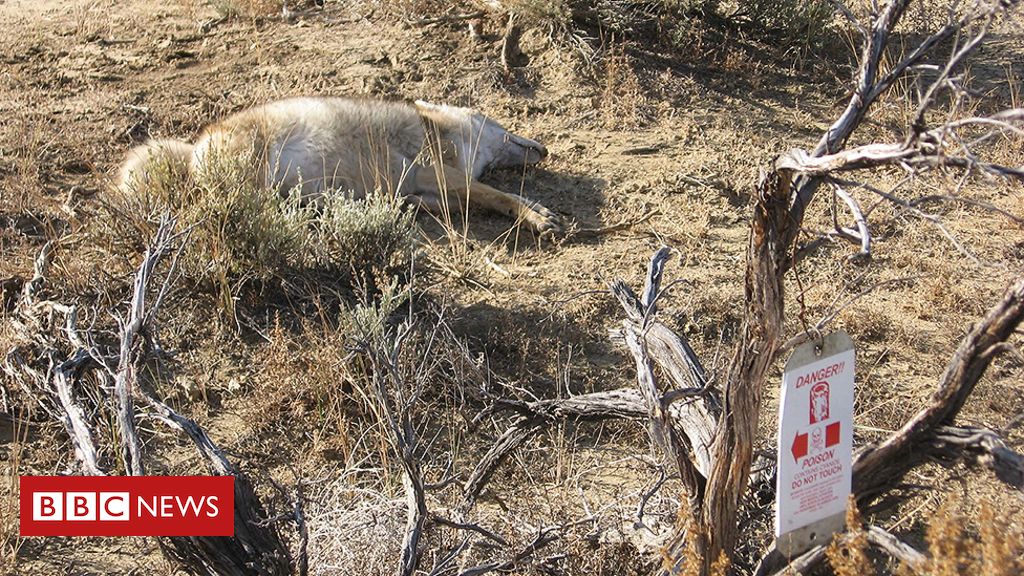 The US government has approved the continued use of “cyanide bombs” to kill pests such as coyotes, foxes and dogs that live in the wild in America.

It comes despite thousands of objections to the M-44 devices, which have killed more than just wild animals since they were first introduced.

They work by drawing animals with bait then spraying poison into their mouths.

But in 2017, a child was temporarily blinded and three pet dogs killed in two incidents in Idaho and Wyoming.

One of the M-44 cyanide bombs had been placed near their backyard in Idaho.

Animals which aren’t considered a threat to farmers and their livestock – such as skunks, raccoons and bears – have also been killed by the traps.

The bombs aren’t available for anyone to buy, but they are used to kill large numbers of wild animals by Wildlife Services (part of the US Department of Agriculture) on behalf of farmers and ranch owners.

Why did the cyanide bombs get reassessed?

In 2018, the US Fish and Wildlife Service agreed to assess the use of the M-44 devices after a lawsuit was brought by four conservation and animal welfare groups in America.

The Environmental Protection Agency (EPA) says 200,000 people wrote letters of objection to the M-44 devices during the 18-month assessment period.

And the Centre for Biological Diversity says that 99.9% of responses to the EPA’s proposal were in support of a ban.

But the EPA has decided they are still safe for use, after support from rancher groups and “stakeholders” including farmers groups.

It said that the cyanide bombs stopped predators from killing livestock and that a ban would result in farmers losing money.

Wildlife and environment agencies in America have reacted with disappointment to the decision to reauthorise the use of the M-44 devices.

“While the EPA added some restrictions, these deadly devices have caused too much harm to remain in use. We need a permanent nationwide ban to protect people, pets and imperiled wildlife from this poison.”

The new restrictions include a rule that says the devices can’t be placed within 100ft of a public road or path, up from 50ft, and that warning signs must be visible 15ft from the device, down from 25ft.

In May of this year the state of Oregon banned the use of the M-44 devices, after a wolf was killed by an M-44 with a spokesperson saying at the time it was “a vital public safety issue that has been addressed”.

In the UK, it is illegal to kill protected animals – such as badger or deer – with poison and against the law to kill any animal with a snare, bow, crossbow, explosive or decoy.

How does cyanide kill?

If a high dose of cyanide is inhaled by a human, it can cause a coma within seconds – stopping the heart from beating, the lungs from breathing and causing seizures.

A lower dose will cause a slower death, where these symptoms will be preceded by headaches, vertigo, confusion and weakness.