Two women who vandalized the Dakota Access pipeline in an effort to halt construction have been indicted on charges that carry up to 110 years in prison and hundreds of thousands of dollars in fines. They are among the harshest penalties environmental activists have faced in the last decade.

Civil liberties lawyers say the charges are in line with industry-inspired scare tactics meant to deter citizens from participating in direct-action protests or acts of sabotage against oil and gas companies. As the deadly impacts of carbon emissions grow ever clearer, the fossil fuel industry has increased pressure on lawmakers and government officials to penalize those who would inhibit their projects’ operations.

At the same time, a growing number of activists have demonstrated willingness to break laws in order to highlight the urgency of the climate emergency and other ecological crises. Ruby Montoya and Jessica Reznicek, who stand accused of damaging pipeline valve sites using a welding torch, “tires ignited by fire, and gasoline-soaked rags,” are part of that trend.

The arrests come more than two years after Montoya, 29, and Reznicek, 38, publicly took responsibility for a series of acts of sabotage that they said was necessary to protect the rivers and waterways under which the Dakota Access pipeline passes. Both women had been involved in the Indigenous-led struggle to stop the pipeline, which attracted thousands of people to opposition camps in North Dakota and Iowa in 2016 and 2017.

“We are speaking publicly to empower others to act boldly, with purity of heart, to dismantle the infrastructures which deny us our rights to water, land, and liberty,” Montoya and Reznicek stated at a press conference in July 2017.

They told The Intercept at the time that they planned to use a necessity defense to argue that they had no choice but to act. Civil liberties attorneys said they are not aware of such a defense being accepted in a federal case related to climate change or environmental issues. It has, however, begun to gain traction in lower courts, where a handful of pipeline protesters have successfully argued that they acted out of necessity.

Lauren Regan, executive director of the Civil Liberties Defense Center, who is representing Montoya, said it’s too early to say whether the activists will follow through with their plan to mount a necessity defense. “It was a couple years ago when those conversations were happening, and now they’re facing 10-year mandatory minimums,” she said. The charges include one count of conspiracy to damage an energy facility, four counts of use of fire in the commission of a felony, and four counts of malicious use of fire.

“I wish the government would use the same resources to go after the oil companies and pipeline companies, but clearly they’re not interested in that,” said Bill Quigley, an attorney who previously represented Montoya and Reznicek. “They shouldn’t be prosecuted; they should be praised. They’re trying to stop the destruction of the human race.” 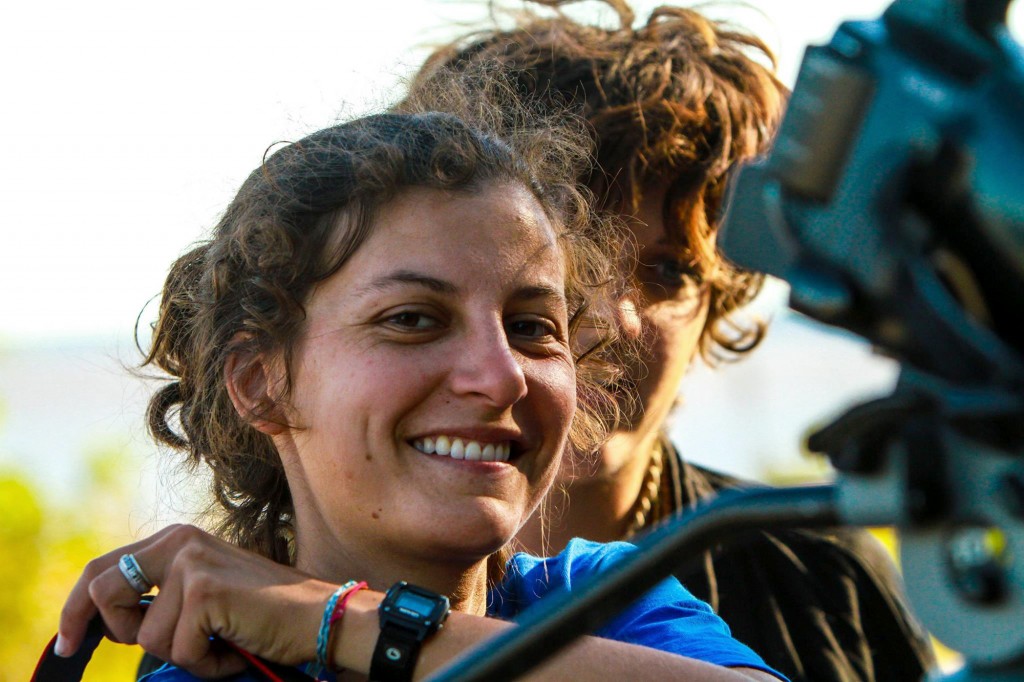 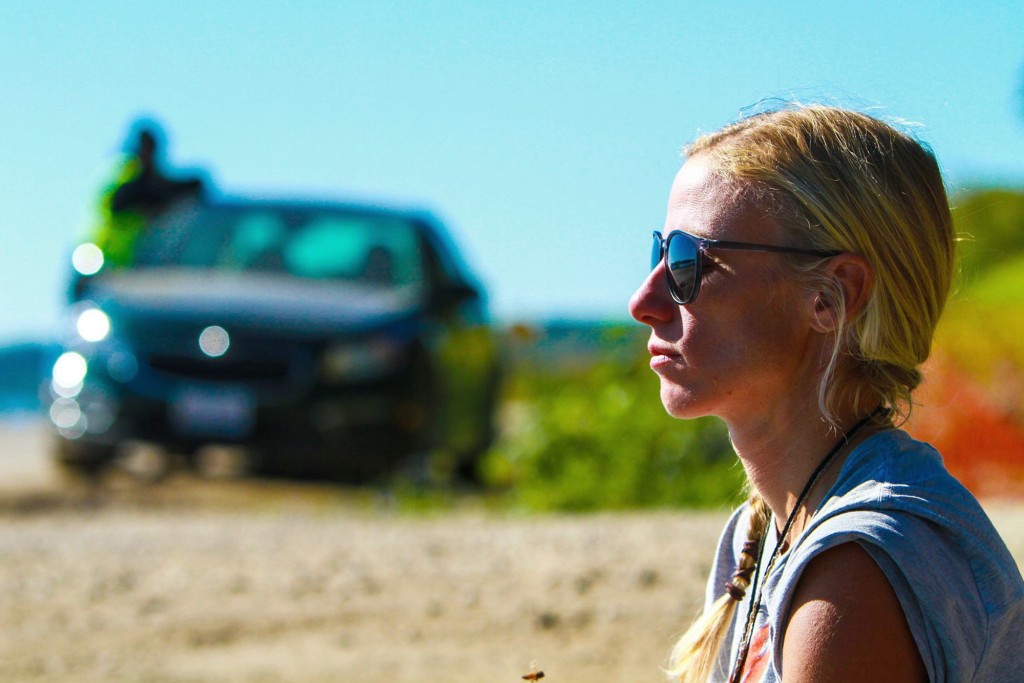 Ruby Montoya, left, and Jessica Reznicek at the entrance to the drilling site in Sandusky, Iowa, where the Dakota Access pipeline goes under the Mississippi River, Aug. 10, 2016.Photos: Courtesy of Joshua Smith

At All Personal Cost

Three years ago, attempts to stand in the way of the Dakota Access pipeline in North Dakota were met with water cannons, tear gas, and rubber bullets in a massive police response carried out in collaboration with the pipeline company Energy Transfer Partners. Pipeline opponents, led by members of the Standing Rock Sioux tribe, were concerned about the project’s potential to contaminate the drinking water of the nearby reservation, while exacerbating the impacts of climate change.

A smaller resistance was established in Iowa. Reznicek, who had long been an active member of the Des Moines chapter of the Catholic Worker, co-founded an organization called Mississippi Stand along with Montoya. The group carried out protests at construction sites along the Iowa leg of the pipeline.

By the spring of 2017, however, the pipeline company had overcome the water protectors; construction was all but complete and the camps mostly cleared. It was then that a series of above-ground valves along the pipeline route were pierced by welding tools.

In response, the mercenary security company TigerSwan launched a multi-state dragnet in search of the saboteurs, who they referred to as eco-terrorists. Montoya and Reznicek were their primary suspects, but internal reports TigerSwan filed to Energy Transfer Partners also described how security personnel cast suspicion on an array of other activists. They reached out to pipeline opponents’ neighbors and local businesses for help in their search. They surveilled one Native couple’s private home and photographed their property. A TigerSwan contractor posing as a water protector sought information about Montoya and Reznicek from pipeline opponents who believed him to be a friend. The documents show repeated instances of the company attempting to feed information to local and federal investigators.

“Incarceration does not matter if we do not have clean water.”

That July, after The Intercept contacted them for comment about the TigerSwan documents, Montoya and Reznicek called members of the press to the Iowa Utilities Board office. They described traveling from county to county to burn holes in pipeline valves and in some cases set fire to equipment — acts that they claimed stalled completion of the pipeline. They said they turned to sabotage only after all other avenues had been exhausted and stopped when oil started flowing.

In front of press cameras, they used a crowbar to dismantle the Iowa Utilities sign and were arrested on site. They were charged with fourth-degree criminal mischief for damaging the sign.

“I guess this was one last opportunity for me to put my case forward in a system that I have no faith in. This created some sense of a platform at least to continue this conversation,” Reznicek said in an interview with The Intercept at the time. “This really is about getting this pipeline stopped. Apparently at all personal cost.”

“Incarceration does not matter if we do not have clean water,” Montoya added.

To their surprise, no charges were filed in connection with their confession, and life moved on. Montoya began teaching at a Waldorf School in Arizona, and Reznicek spent time at a monastery. 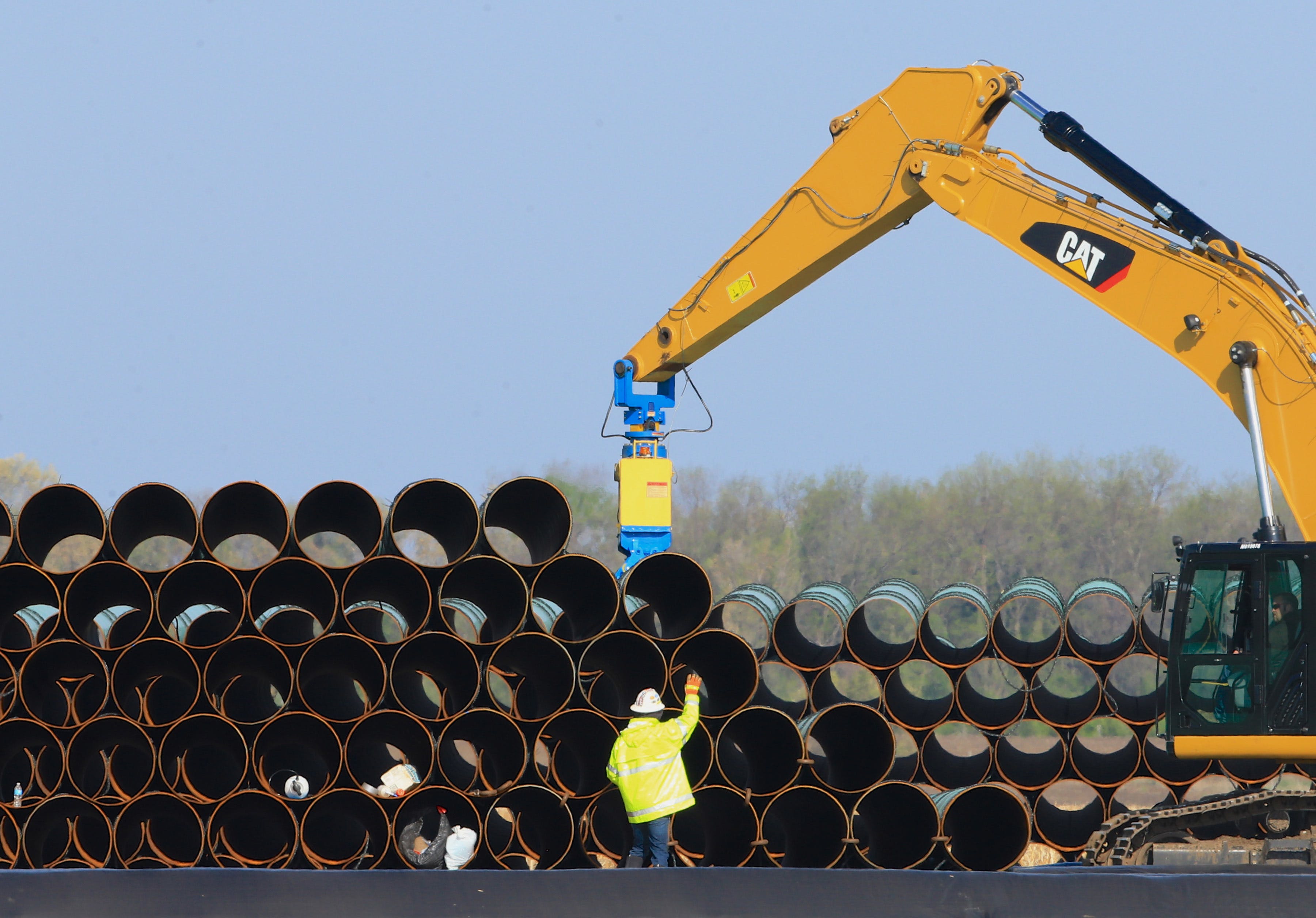 Pipes for the proposed Dakota Access oil pipeline are stacked at a staging area in Worthing, S.D., on May 9, 2015.

Remove Them From the Gene Pool

At an energy industry conference in 2018, Kelcy Warren, CEO and board chair of Energy Transfer, mentioned Reznicek and Montoya’s actions. “I think you’re talking about somebody who needs to be removed from the gene pool,” he said.

The oil industry used the acts of sabotage to push for a crackdown on pipeline opponents. In 2017, the American Legislative Exchange Council introduced model legislation that would increase penalties for anyone who interfered with oil industry operations. Iowa and at least seven other states have passed related anti-protest laws. More recently, industry lobbyists, as well as members of the Trump administration, have proposed federal legislation to make it a felony to inhibit pipeline operations. Most of the legislative proposals are broad enough to net individuals who commit no acts of property destruction.

Meanwhile, since it started operating, the Dakota Access pipeline has had at least 10 spills, and this past June, Energy Transfer announced plans to nearly double the pipeline’s capacity. A recent study indicated that current fossil fuel infrastructure leaves humanity with less than a 50 percent chance of avoiding unmanageable climate crises.

Energy Transfer did not respond to a request for comment.

In parallel to industry lobbying, fossil fuel opponents have advanced their own efforts to set legal precedents that protect dissent. “The state of the necessity defense in climate cases is emerging, and it is gaining acceptance in state courts across the country,” said Quigley.

Pipeline protesters in Massachusetts have had the most significant success in mounting the climate necessity defense. In March 2018, a judge found 13 opponents of a Spectra gas pipeline not responsible for civil charges related to their attempts to block construction, because the environmental risk posed by the pipeline made their actions necessary.

The defense has not yet been deployed in a criminal case, but that will soon change. In Washington, Ken Ward was convicted of burglary for his participation in an attempt to turn off valves on five oil sands pipelines across the U.S. Ward appealed, arguing that his constitutional right to present a defense had been violated because the judge rejected evidence of the climate crisis he had submitted to prove the necessity of his action. An appeals court agreed, and in September, the Washington Supreme Court declined to review the decision. A new trial is expected this winter.

Meanwhile, the most severe penalties for participants in the movement against the Dakota Access pipeline have been borne by Indigenous opponents. Red Fawn Fallis, for example, faced a potential life sentence after a gun in her possession went off as she was tackled to the ground by police. The Oglala Lakota Sioux water protector is serving a five-year sentence. 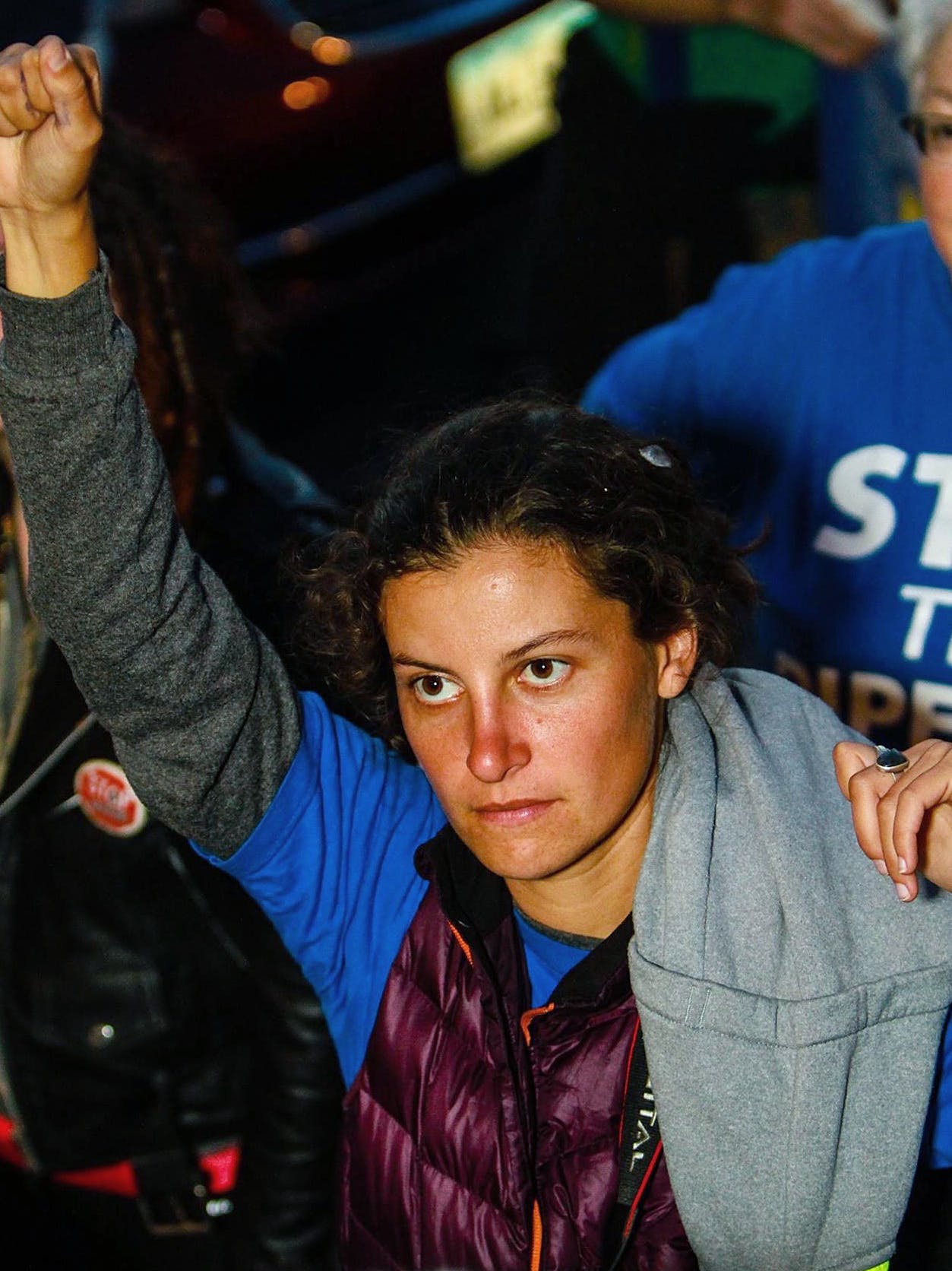 Gifts to the Fossil Fuel Industry

Montoya’s lawyers requested that the U.S. Attorney’s Office allow her to turn herself in if charges were filed. Instead, she was arrested at her home in Arizona on September 27. Reznicek was able to negotiate a surrender via a public defender after learning of Montoya’s arrest.

It’s unclear why the investigation took more than two years, but a possible historical parallel can be found in a string of arrests in the mid-2000s, during a period known as the Green Scare. Law enforcement officers arrested environmental activists accused of involvement in arsons, years after they committed the alleged crimes. The FBI had used that time to build cases against an array of actors. “Based on past experience and based on some of the other clues that I’m seeing, I certainly have a concern that there may be more than two defendants, but that is real speculation,” said Regan, who represented many Green Scare defendants.

The indictment against Reznicek and Montoya claims that the acts were carried out “with other persons known and unknown by the Grand Jury.” In an interview shortly after their confession, Reznicek told The Intercept, “At no point was anyone else involved in these activities. Not even in consultation. Not in anything.”

A spokesperson for the U.S. Attorney’s Office of the Southern District of Iowa declined to comment.

Regan called the charges against Reznicek and Montoya evidence that the industry’s legislative initiatives are a public relations stunt. “What these charges indicate to me is that the state does not need any of these gifts to the fossil fuel industry. The existing crimes are more than adequate, because obviously ‘malicious use of fire’ is not a crime that was drafted by ALEC,” Regan said.

Montoya remains in jail in Arizona, awaiting a hearing, while Reznicek was released on bail Tuesday, on house arrest with an ankle monitor. Her trial is scheduled for December 2.

US, Lobbyists and Arm Dealers Scramble to Reposition Amid Impending Saudi Defeat in Yemen

Engaging the World: The ‘Fascinating Story’ of Hamas’s Political Evolution