Spread the love Austin, PD — In the past several weeks, the Austin police department has been captured on video… 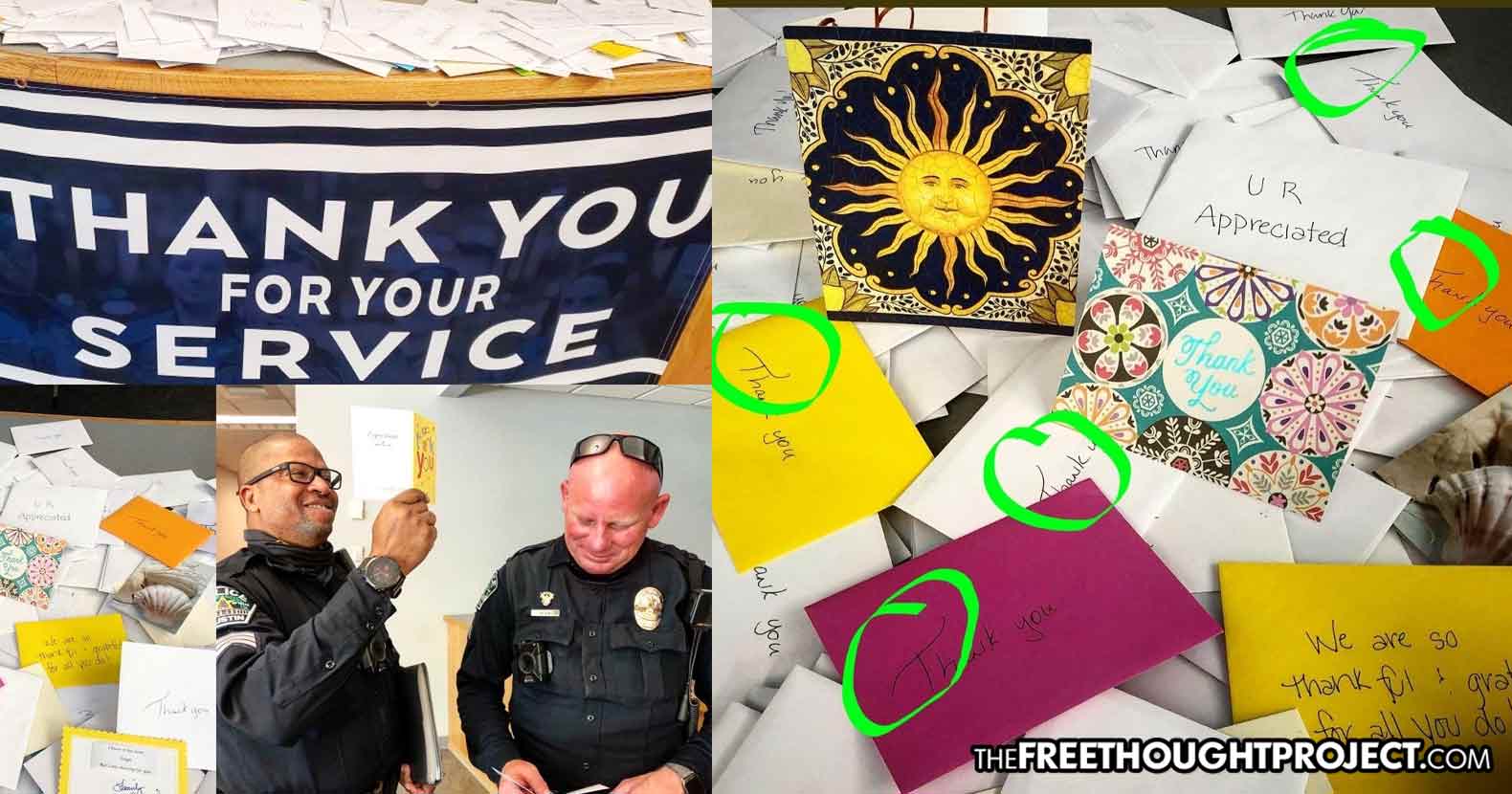 Austin, PD — In the past several weeks, the Austin police department has been captured on video murdering an unarmed man, shooting a child in the head with a rubber bullet, shooting an innocent student in the head with a projectile, and firing on the citizens attempting to render aid to that student. These acts of police violence have all gone unpunished. Tensions, as one might expect, are high between the community and their police force. According to the Austin police department, however, there is an outpouring of support in the form of “Thank you” cards. But the Twitter-verse has found that something smells fishy.

On Saturday, the Austin police department took to Twitter to essentially put out a piece of propaganda to claim how much their community loves them. A black and a white officer were conveniently chosen to be photographed reading from a pile of thank you cards.

“We can’t express enough how grateful we are to serve you, Austin,” the APD account tweeted on Saturday. “Our officers have been working around the clock during these unprecedented times and thank everyone who took the time to write and make our day a little brighter. #OneAustinSaferTogether #Thankful”.

We can’t express enough how grateful we are to serve you, Austin. Our officers have been working around the clock during these unprecedented times and thank everyone who took the time to write and make our day a little brighter. #OneAustinSaferTogether #Thankful pic.twitter.com/U3vomU2tbq

But when their Twitter followers looked at the picture closely, they began to spot something strange. Most of the cards in the photo had the same handwriting. Weird, right? That’s what we thought too.

“Weird how all of those letters have precisely the same handwriting and were all hand-delivered without postage,” one Twitter user wrote.

Others called out the ‘coincidence’ of the dynamic races of the officers chosen in the photo as well.

This is so staged and sad I’m not even mad.

“make sure we have a black officer and white officer in the photo, too”

After receiving so much backlash online, the Austin police department released a ridiculous statement to Gizmodo about why the cards had the same handwriting. That hilarious statement is below.

“Many of you have inquired about the cards that were posted on our social media pages,” Austin PD wrote to Gizmodo. “The cards were from several community members to include kindergartners and Austin families, who wanted to show support for APD officers. Two people, who organized delivering the cards in person, addressed the envelopes with a “Thank you,” so our officers would open the notes to receive encouragement during these difficult times. That is why the front of the envelopes appear to have the same handwriting.” All the letters were, APD stated, delivered at the same time this past Thursday.

As Gizmodo points out, however, the inclusion of “kindergartners” is suspect because Texas schools were ordered to close for the remainder of the 2020 academic year by state governor Greg Abbott in mid-April. There are no kindergarten classrooms open in Texas, or most of the country for that matter.

In a phone call after Gizmodo requested clarification, a public information officer declined to identify the two people who delivered these letters. The officer claimed that APD are not aware of what community group (if any) was responsible for organizing the letter-writing campaign, and that the information concerning kindergarteners was provided by the two individuals who delivered the letters. “We don’t know what school or what kindergarteners” the officer admitted, later walking the claim back to state that calling some of the writers “kindergarten-aged” would be more accurate.

In the same call in which the PIO admitted “we don’t know who they are,” they also staunchly denied that the letter-writers are themselves officers or relatives of officers. APD deny that the purpose of posting these photos was in any way related to recent events.

It is indeed possible and also likely that the APD received the letters from a bunch of blue lives matter folks who could’ve written dozens of cards each. However, the fact that the APD tweeted images of their two officers smiling and laughing with the thank you cards only days after they shot a child in the head with a rubber bullet, shot a student in the head with a projectile and fired on the ones helping him, and also murdered 42-year-old Michael Ramos, speaks to the tone-deaf nature of law enforcement.

We are expected to believe that there is an outpouring of support for a department who conducts itself in such a violent manner. Sorry, but we just don’t buy it.