Brexit Party leader Nigel Farage has laid down the gauntlet to Boris Johnson, warning the UK PM that if he… 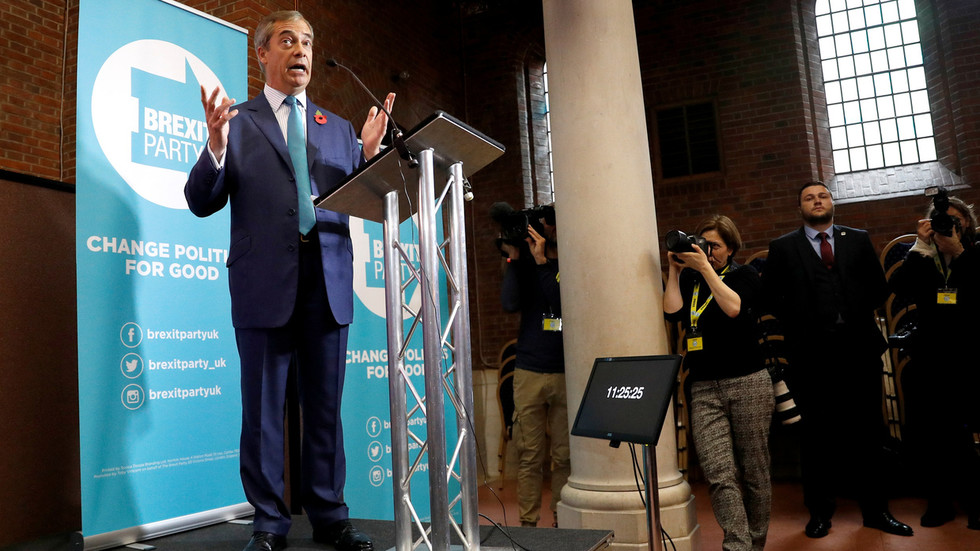 Brexit Party leader Nigel Farage has laid down the gauntlet to Boris Johnson, warning the UK PM that if he doesn’t scrap his Brexit deal in the next two weeks his party will run against the Tories in every seat for the election.

Speaking at the launch of his party’s general election campaign on Friday in Westminster, Farage insisted that if Johnson agreed to his Brexit proposals, their ‘Leave alliance’ could become “an unstoppable force” when Brits go to the polls in a little under six weeks.

The hardline Brexiteer wants Johnson to abandon his deal that is “not Brexit” in favor of a “comprehensive free-trade agreement,” made possible by delaying the UK’s exit from the EU by another five months. The UK is currently scheduled to leave the bloc by January 31, 2020.

On Monday, the Brexit Party will unveil 500 candidates it proposes to stand in the December 12 general election. Farage has set the Conservatives a November 14 deadline to consider his offer.

Farage maintains that if Johnson agrees to his terms then he would massively scale back the number of seats his party would contest.

The prominence of the Brexit Party in the December snap poll could potentially have a huge effect on who ends up in 10 Downing Street. Johnson has been at pains to say how much he believes in the Brexit deal agreed with Brussels, so it would be a major U-turn to ditch it in favor of Farage’s plan.

Conversely, Farage will not want to be known as the man who allowed Brexit to be thwarted if carrying out his threat to compete with the Tories for the ‘Leave’ Brexit vote meant that Labour, a party which favors a second EU referendum, gained power.