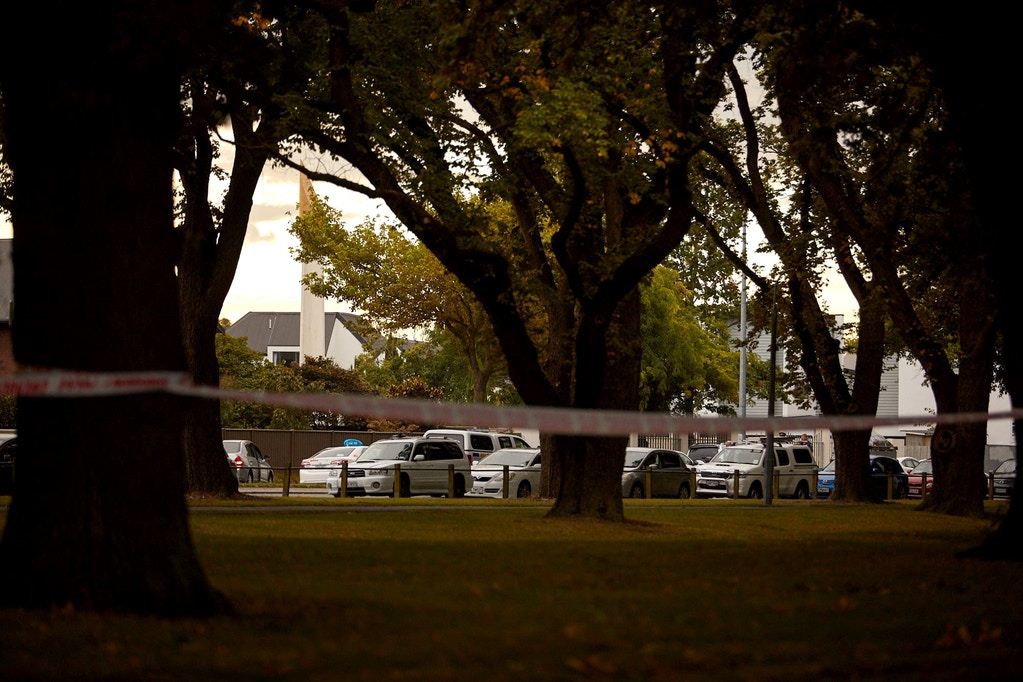 Police officers cordon off the area as they inspect the Al Noor Mosque after gunmen attacked two mosques and fired multiple times during Friday prayers in Christchurch, New Zealand on March 15, 2019.

So begins the online manifesto of the man accused of shooting and killing at least 49 Muslims in a terror attack targeted at two mosques in New Zealand.

“Even if we were to deport all Non-Europeans from our lands tomorrow, the European people would still be spiraling into decay and eventual death,” it continues. “In the end we must return to replacement fertility levels, or it will kill us.”

The alleged shooter goes on to refer to his “dislike” of Muslims, and his particular hatred for converts to the Islamic faith, while referring to the attacks as “revenge” against Islam. He talks of a “white genocide” and describes Muslim immigrants as the “most despised group of invaders in the West.”

Whether or not this manifesto turns out to be a trap, designed for the purposes of trolling, baiting, and “shitposting,” as Bellingcat’s Robert Evans has argued, there is no denying that it is a hate-filled screed. It is vile, viciously anti-Muslim and anti-immigrant, and unhinged.

But what it is not is shocking. There is nothing shocking about it. How can there be? Have you not been paying attention? Much of his rhetoric and references are borrowed from the political and media mainstream — especially here in the United States.

When I read his manifesto, I couldn’t help but think of high-profile American politicians, such as the president of the United States who said, “Islam hates us,” referred to “people coming out of mosques with hatred and death in their eyes and on their minds,” and compared a caravan of migrants to an “invasion.” Or Sen. Ted Cruz, who called on “law enforcement to patrol and secure Muslim neighborhoods before they become radicalized.” Or Sen. Marco Rubio who said he was in favor of “closing down anyplace — whether it’s a cafe, a diner, an internet site — anyplace where radicals are being inspired.” Or Sen. Lindsey Graham who declared: “If I have to monitor a mosque, I’ll monitor a mosque.” Or former Gov. Mike Huckabee who described Muslims in the Middle East coming out of mosques on Fridays “like uncorked animals.” Or even former President Bill Clinton, who suggested at the Democratic National Convention in 2016 that Muslim-American citizenship was contingent on good behavior and proving loyalty: “If you’re a Muslim and you love America and freedom and you hate terror, stay here and help us win and make a future together.”

When I read the alleged shooter’s manifesto, I couldn’t help but recall how right-wing pundits have made so many similar statements — and paid no penalty. For example, author Ann Coulter who has spoken openly of “ragheads,” “camel jockeys,” and “jihad monkeys,” declaimed three days after 9/11 that “we should invade their countries, kill their leaders, and convert them to Christianity.” Or commentator Ben Shapiro, who believes that a “majority” of the world’s Muslim population is “radicalized” and has claimed that “Arabs like to bomb crap and live in open sewage.” Or Fox News host Tucker Carlson, who has won the support of neo-Nazis by repeatedly making not-so-coded references to the white genocide conspiracy theory and has also dismissed Iraqis as “semiliterate primitive monkeys.” Or Brigitte Gabriel, friend of the president, who thinks that “a practicing Muslim who believes the word of the Quran to be the word of Allah, who abides by Islam, who goes to mosque and prays every Friday … cannot be a loyal citizen to the United States of America.” Or Steve Bannon, former executive chair of Breitbart News and ex-adviser to the president, who has declared, “Islam is not a religion of peace” but “a religion of submission,” and warned that the U.S. could transform into the “Islamic States of America.”

When I read the manifesto, I couldn’t help but remember the names of some prominent liberals, too, such as atheist and scientist Sam Harris, who dubbed Islam “the mother lode of bad ideas” and announced that “we are not at war with ‘terrorism.’ We are at war with Islam.” Or TV host Bill Maher who called Islam “a mafia” and accused “violent” Muslims of bringing “that desert stuff to our world.” Or author and ex-Muslim Ayaan Hirsi Ali, who has demanded that Islam be “crushed” and thinks “every devout Muslim who aspired to practice genuine Islam, even if they didn’t actively support the [9/11] attacks, they must have at least approved of them.” Or novelist Martin Amis, who once said, “There’s a definite urge — don’t you have it? — to say, ‘The Muslim community will have to suffer until it gets its house in order.’ What sort of suffering? Not letting them travel. Deportation — further down the road. Curtailing of freedoms. Strip-searching people who look like they’re from the Middle East or from Pakistan.”

To be clear: I am not suggesting that any of these people, whether conservatives or liberals, politicians or pundits, are directly responsible for this heinous crime. (The alleged shooter does, though, praise Donald Trump “as a symbol of white identity and common purpose,” and claims that “the person that has influenced me above all was Candace Owens,” an “alt-right,” social media superstar. Again, this may or may not be shitposting.)

What I am suggesting, however, is that violence does not exist in a vacuum. In fact, since the 9/11 attacks, the right has demanded that progressives and Muslims crack down on “preachers of hate.” Remember the so-called conveyor belt that leads from nonviolent rhetoric to violent acts by Muslims? Remember how “ideology matters”?

Isn’t it past time for conservatives to take their own advice?

And what of the rest of us? What lessons will we learn from this latest hate-filled atrocity in New Zealand? Are we willing and able to stand up to Islamophobia on days when there are not brutal terrorist attacks on Muslims in mosques? Will we call out vile anti-Muslim rhetoric when we see it on cable news, or in our newspapers and magazines — or only when we see it quoted from the online manifesto of a deranged mass murderer?

I doubt it. “People who can only condemn racism and Islamophobia — being ‘horrified’ and ‘shocked’ — only when so much blood is spilled are part of the problem,” the Cambridge academic Priyamvada Gopal observed on Twitter on Friday. “Because the rest of the time, they are busy normalising & minimising them.”