Media playback is unsupported on your device Rwanda has restricted movement across its border with the DR Congo, where an… 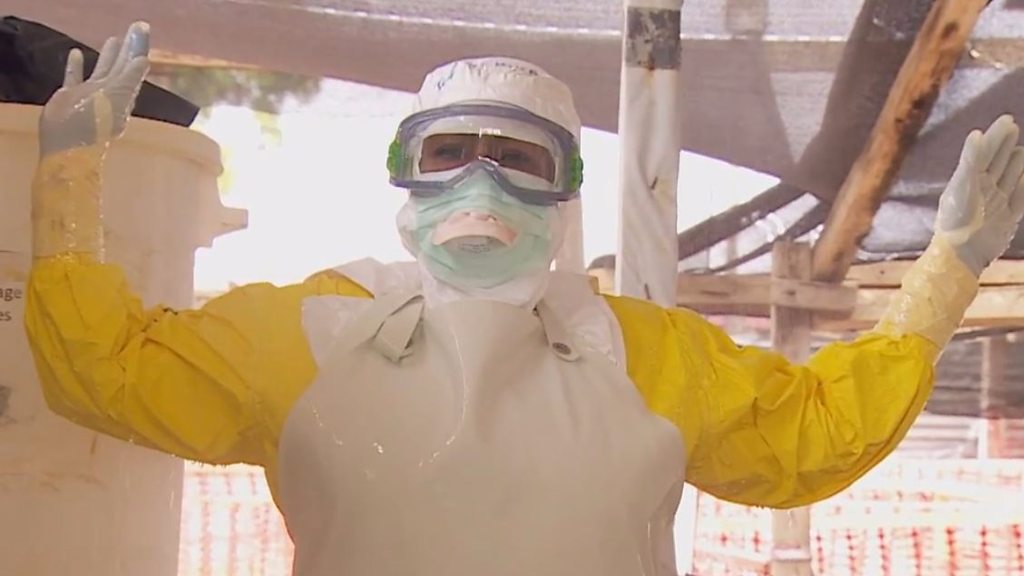 Rwanda has restricted movement across its border with the DR Congo, where an Ebola outbreak has killed more than 1,800 people in the past year.

Parts of the border were closed after a third case of Ebola was identified in the Congolese border city of Goma, where two people have already died.

It is the worst Ebola outbreak in the nation’s history: at least 2,700 people have so far been infected.

The outbreak has been complicated by an active conflict zone.

About 12 new cases are being reported every day in the Democratic Republic of Congo, the World Health Organization (WHO) reports.

The biggest crossing point between the two countries was reopened after 12 hours, while a smaller one was expected to reopen later on Thursday.

The border had been closed to “avoid unnecessary crossings” to Goma, said Gilbert Habayarimana, the mayor of Rubavu district in western Rwanda, which borders Goma.

Earlier, the Congolese presidency said it “deplore[d] this decision, which runs counter to the advice of the WHO”.

The WHO previously warned against trying to contain the virus by restricting travel or trade. Last week, it designated the outbreak a global health emergency, its highest level of alarm.

The designation has only been used four times previously, including during the Ebola epidemic that killed more than 11,000 people in West Africa between 2014 and 2016.

Rwandans who cross the border for work voiced their concerns.

“The closure is terrible for me. Yes, Ebola is a terrible thing, but living is what matters most,” Ernest Mvuyekure, a builder who works in Goma, told the BBC. “I’m more afraid of hunger than Ebola.”

Claudine Uwitonze, who works in both the Rwandan city of Gisenyi and in Goma, said: “I’m so shocked now, because my life depends on DR Congo. I’m afraid I’m going to die of hunger because I have nothing else to do.”

What is the situation in Goma?

Ebola is affecting two provinces of DR Congo – North Kivu and Ituri. Goma, home to two million people, is the capital of North Kivu and lies just across the border from the Gisenyi.

Until now, the virus has been mostly confined to more remote areas, mostly around Beni and Butembo, to the north of Goma.

Ebola has killed two people in Goma so far: a priest last month and an artisanal miner earlier this week.

The miner came from the north-eastern province of Ituri and had been admitted to a health centre in Kiziba, on the outskirts of Goma, on 13 July. He tested positive for Ebola on Tuesday and died on Wednesday morning.

According to a report by the AFP news agency, a third person – believed to be the miner’s daughter – is also infected.

Is there no vaccine?

People give a variety of reasons for not taking the vaccine:

The vaccine, made by Merck, was developed during the epidemic in West Africa and has been available throughout the latest outbreak.

It has proven effective but is in relatively short supply, so the WHO recommended a second vaccine made by Johnson & Johnson to complement it.

But DR Congo’s Health Minister Oly Ilunga complained that the Congolese were being treated as “subjects of experimentation”, reports Reuters news agency, and he resigned over the issue.

Why has the outbreak not been brought under control?

Tackling the disease has been complicated by conflict in the region.

Since January, there have been 198 attacks against healthcare workers or Ebola treatment facilities, leading to seven deaths and 58 injuries.

Another major problem has been distrust of healthcare workers. As a result, about a third of deaths have not been at specialist treatment centres, but in the community – where there is a greater risk of the disease spreading to neighbours and relatives.

Is the world doing enough to help?

The UK International Development Secretary, Alok Sharma, said he was “proud of our support to create a life-saving Ebola vaccine”.

“Diseases like Ebola have no respect for borders,” he said. “It is essential the rest of the international community steps up to help. If we don’t act now, many thousands more lives could be lost.”

But the WHO has for months been clear that it has insufficient money to tackle the problem. It had estimated that it needed $ 98m (£81m) to tackle the outbreak between February and July, but it faced a shortfall of $ 54m.