JERUSALEM — Elections for the Israeli Knesset are scheduled for next month. It has also recently been announced that in…

Between 40% and 60% of Palestinian citizens of Israel participate in the elections. In the last elections there was a considerable increase and this time around the expectation is that the number will go down dramatically.

When in 2015 the Joint List was formed, many thought it was a miracle. No one thought that the different political groups that represent the Palestinians of 1948 could ever agree to unite under a single coalition. But the Socialists and the Islamic Movement and everyone in between sucked it up for the good of the cause and they ran together. They won an unprecedented 13 seats; and in the 2019 elections, they again did what no one thought was possible: they won 15 seats, making them the largest block in the Knesset.

But, although the list is made of serious hard-working legislators, they have relatively little to show for their hard work, and the most pressing issue in the Palestinian community of 1948 has only become worse.

Violent crime within these communities is at an all-time high, with the proliferation of arms reaching absurd proportions. Granted, this violence is perpetrated by the State with the Israeli police standing by, and the source of the weapons is the Israeli military. Had these arms been used for political aims, their flow would have been halted long ago or else they would have overthrown the government.

Home demolition; lack of budgets and infrastructure; and the deepening of the racist laws and policies, not to mention discourse, have never been so bad. So if this is what happens when Arab representation is high in the Knesset, why bother? One should note that these outcomes are not the fault of the Palestinian parliamentarians but stem rather from the impossible environment in which they operate. An environment that is dedicated to making them fail. In fact, the Joint List could have doubled its number of seats, and still they would largely be ignored.

The Zionist parties will never collaborate with the “Arabs.” They will never join them in a coalition. As we saw after the last election, former General Benny Gantz gave up the chance to be the first one to beat Netanyahu in over ten years and become Prime Minister because he might have had to rely on the support of the “Arab” members of Knesset. So instead he turned it all down, broke his promise to the voters, and joined a Netanyahu-led government. Cooperation with the Palestinians is a red line that no Zionist politician will cross.

Now the Joint List is no longer what it was. The Islamic Movement broke away and voted with Netanyahu against dissolving the Knesset. They also cite differences with the rest of the List on issues like LGBTQ rights. It seems unlikely they will carry enough votes to get even a single seat this time around. There is also a great general sense of disillusionment and it is expected that Palestinian citizens will vote in lesser numbers, which will bring what is left of the Joint List to only seven or eight seats.

When calls to boycott the elections are raised at this point, there is good reason to listen. Even when Palestinian political parties are at their record best, they are still unable to make a difference. The State has proven beyond any doubt that it will never end the policies of neglect and discrimination, so why play the game that Israel wants them to play?

In a piece in Aljazeera on the announcement of elections in the Palestinian Authority, Yara Hawari writes that “elections are merely technical procedures and are in no way interchangeable with democracy. They regularly take place not only in democracies but also in countries where democratic characteristics are lacking or completely absent.” 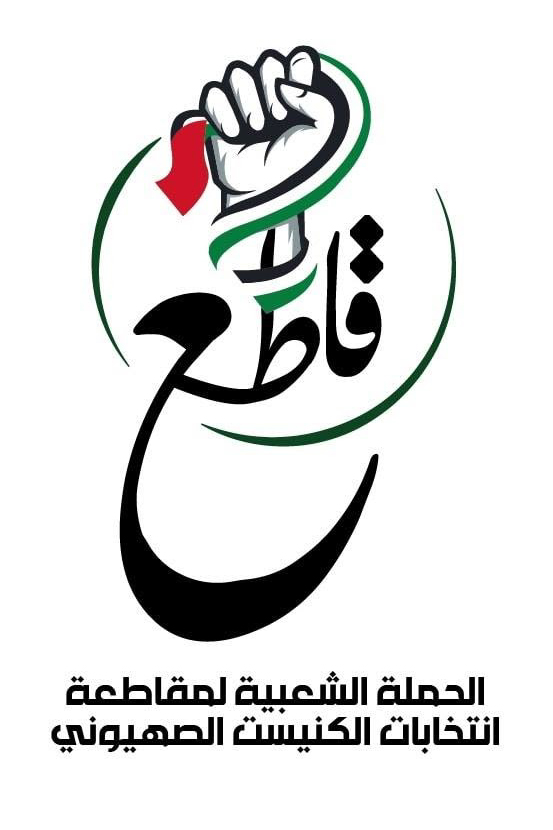 Translation | The grassroots campaign to boycott the Zionist Knesset elections

She writes this regarding the PA but the same can be said about Israel. The fact that Palestinian citizens may vote is merely a procedural matter and has little to do with democracy.

Two main forces have been boycotting the elections and calling on others to do the same. The first is the Northern Islamic Movement — which is not a part of the Islamic Movement that did run for the Knesset (that one was outlawed by the Israeli authorities and is led by the now-imprisoned Sheikh Ra’ed Salah). Leading the current boycott campaign, the Popular Campaign to Boycott the Elections, is the secular, progressive movement of Abna’ Al-Balad.  Raja Eghbarieh, the longtime leader of the Abna’ Al-Balad, has also been detained and is constantly persecuted by the State.

In a statement issued by the Popular Campaign to Boycott the Knesset Elections, the leaders of the campaign called on Palestinian citizens of Israel to avoid participating in what are now the fourth elections in two years. This, the statement says, confirms that the Zionist state is in crisis.

This will be the election for the twenty-fourth Knesset. The statement calls on potential Palestinian voters to avoid the “risk of being deceived for the 24th time! … Our position in principle is that the entire Zionist Knesset represents the crimes of the Zionist occupation of Palestine, the displacement of its people, racism, killing, the destruction of our homeland and preventing the right to self-determination of our people.”

The current reality, the campaign leaders correctly state, is that the most likely candidates for prime minister are one of three racists — namely Gideon Saar, Naftali Bennett, and Benjamin Netanyahu. And it is far more likely that the first two will end up working for Netanyahu in a government led by him.

There are signs of excitement in the West Bank and the Gaza Strip in preparation for the elections. Unofficial sources state that over 90% of the people who reside in those two enclaves have registered to vote.

One has to wonder, however, what the point is in participating in elections that at best promise to be a charade, if they are not canceled altogether. The Palestinian Authority itself has little authority and is seen by many as little more than a sub-contractor doing Israel’s dirty work by arresting Palestinian activists and providing intelligence to the Israeli secret police.

Even if the PA elections do take place, that only means that a small fraction of Palestinians are represented. Israel will never allow Palestinian residents of Jerusalem or the refugees in the camps outside of Palestine to participate. The most we will see is a reshuffling of chairs that will bring no change and no relief to the lives of Palestinians.

Elections matter when they are a vehicle of democracy. Otherwise, they are nothing more than a process to legitimize a nondemocratic regime. Since Palestine is occupied and under an oppressive regime, there is no democracy and no reason for anyone to rejoice in elections, let alone participate. Be it under the pretense of a democratic PA or a democratic Israel, either way, the right move is to take a stance and to boycott, rather than lend them legitimacy.

Elections will matter in Palestine when they are called to include all people who live between the River and the Sea — one person, one vote for a single legislature and executive in a Palestine that is liberated. That will be the right time to vote. In a liberated Palestine with all political parties free to run and Palestinian leaders now in Israeli occupation jails free to lead — those will be elections that matter. Nothing less should be accepted.

Feature photo  | A poster that reads, “leave,” lies on the ground during a demonstration against a visit by Israeli Prime Minister Benjamin Netanyahu to the northern Arab city of Nazareth, Israel, Jan. 13, 2021. Sebastian Scheiner | AP

Cuba Could be on the Brink of a Revolutionary COVID Vaccine, But US Sanctions Are Slowing It Down