The most revealing passage of the Democratic debate in Los Angeles on Thursday started when Sen. Elizabeth Warren explained why… 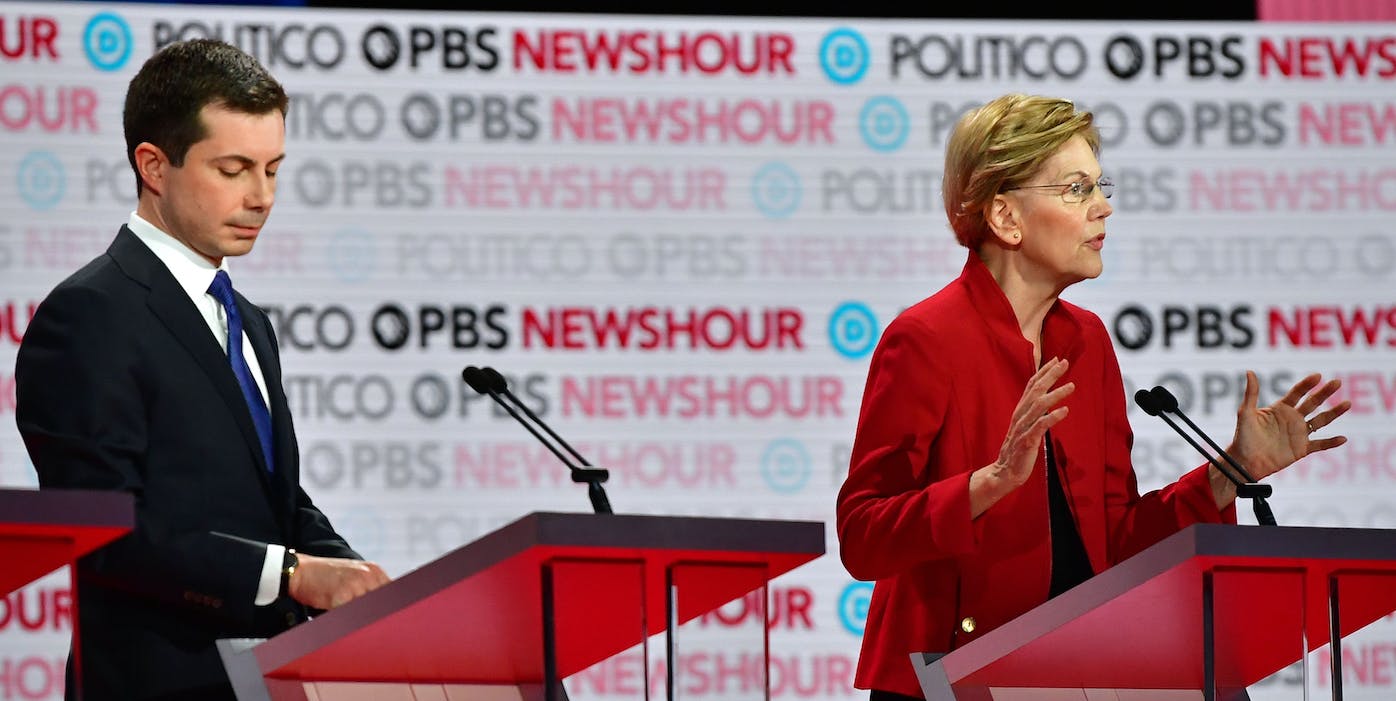 The most revealing passage of the Democratic debate in Los Angeles on Thursday started when Sen. Elizabeth Warren explained why she decided to forgo private fundraising events with wealthy donors and rely instead on small-dollar donations from supporters.

Within minutes, South Bend Mayor Pete Buttigieg, who seemed personally affronted by the contrast Warren set up with campaigns like his, which rely on such events, found himself trapped into defending a system of campaign finance that gives influence to moneyed donors. It is the candidate, he suggested, that is corruptible — not the money that’s corrupting.

People that can put down $ 5,000 to have a picture taken don’t have the same priorities as people who are struggling with student loan debt or to pay off medical debt.

I won’t let them drown out the voices of everyone else—not in my campaign, not in my White House. #DemDebate pic.twitter.com/zxBnl7mpXx

Those hours she spends after campaign events meeting and posing for photographs with everyone who waits to see her, Warren explained, mean that she is not using that time to sell access to wealthy donors at closed-door fundraisers. “People who can put up $ 5,000 or more in order to have a picture taken, in order to have a conversation and in order maybe to be considered to be an ambassador,” Warren said, should not have more access to government officials than people with less money.

Buttigieg, who dined last week in what the Associated Press described as the wine cave of a billionaire couple in Napa Valley that “boast a chandelier with 1,500 Swarovski crystals, an onyx banquet table to reflect its luminescence and bottles of cabernet sauvignon that sell for as much as $ 900,” raised his hand to respond.

“I can’t help but feel that might have been directed at me,” he began. He then cast the decision to spend time with wealthy donors as necessary to defeat President Donald Trump in 2020. Warren, however, held up her campaign as proof that it was not necessary to compete in the Democratic primary, and contrasted her approach to one that gives outsized influence to people with wine caves.

“The mayor just recently had a fundraiser that was held in a wine cave, full of crystals and served $ 900 a bottle wine. Think about who comes to that,” she said. “He had promised that every fundraiser he would do would be open-door, but this one was closed-door.”

Sen. Elizabeth Warren: “Billionaires in wine caves should not pick the next president of the United States.”

Pete Buttigieg: “This is the problem with issuing purity tests you cannot yourself pass.”#DemDebate pic.twitter.com/sCvF6zq63K

Buttigieg tried to steer the conversation away from the private access he grants wealthy donors into a discussion of the fact that he is not personally wealthy — wrongly implying that Warren’s decision to forgo closed-door fundraising was “a purity test,” or an attack on the rich.

“You know, according to Forbes magazine, I’m literally the only person on this stage who is not a millionaire or a billionaire,” Buttigieg said. “This is the problem with issuing purity tests you cannot yourself pass. If I pledge — if I pledge never to be in the company of a progressive Democratic donor, I couldn’t be up here. Senator, your net worth is 100 times mine.”

“I do not sell access to my time,” Warren replied. “I don’t meet behind closed doors with big-dollar donors.”

Buttigieg then suggested that Warren was hypocritical because some of the money she began her presidential campaign with was raised from wealthy donors during her previous Senate campaign, before she decided not to “run a traditional campaign,” for the presidency. Warren has cited the need to draw a clear contrast between her approach and Trump’s, whose campaign is awash in cash from wealthy donors raised at private events where photos with the president are available for a very large fee.

A short time later, Sen. Bernie Sanders, who also refuses to court big money donors, interjected with a hammer blow jibe, leveled at both Buttigieg and Joe Biden, the former vice president who also relies heavily on money raised at private events with wealthy donors. Biden, unlike Buttigieg, allows a pool reporter to attend and make a record of each of those events.

“Now there’s a real competition going on up here,” Sanders said. “My good friend Joe, and he is a good friend, he’s received contributions from 44 billionaires. Pete on the other hand, is trailing, you only got 39 billionaires contributing. So Pete, we look forward to you — I know you’re an energetic guy and a competitive guy — to see if you can take on Joe on that issue.”

Pete Buttigieg only has 39.

This is why 3 people own more wealth than the bottom half of America.

This is why Amazon and other major corporations pay $ 0 in federal income tax.

We need to get money out of politics. #DemDebate pic.twitter.com/Fw3f9qCUqK

Following the exchange, political reporters and progressive Democrats were stunned that Buttigieg seemed to walk himself into a position where he was defending the influence of money on politics that most Democrats abhor.

The fact that Buttigieg is engaged in an outright defense of the modern American political fundraising system – which basically everyone agrees creates some corruption – is really amazing.

If this is what Buttigieg thinks, why fight for campaign finance reform? If there’s no potential for corruption whats the point

Pete’s supreme assurance of his own purity led him to walk right into a full-throated defense of granting special access to millionaires and billionaires.

After the debate, Sanders campaign adviser Jeff Weaver fielded questions from reporters wearing a PetesWineCave.com t-shirt. The address redirects to a donation page for Sanders.

By the end of the night, Warren supporters eagerly embraced the meme that they had all paid $ 0 for pictures with her.

They’re Murdering My Son: Father of Julian Assange Tells of Pain and Anguish

If Iran Is Responsible for the Fuel Tanker Attacks in the Gulf of Oman (And It May Not Be), It Is Only a Reaction to Washington’s Outrageous Conduct in the Middle East