On February 4, representatives from the Palestinian Movement, Hamas, visited Moscow to inform the Russian government of the latest development…

On February 4, representatives from the Palestinian Movement, Hamas, visited Moscow to inform the Russian government of the latest development on the unity talks between the Islamic Movement and its Palestinian counterparts, especially Fatah.

This was not the first time that Hamas’s officials traveled to Moscow on similar missions. In fact, Moscow continues to represent an important political breathing space for Hamas, which has been isolated by Israel’s Western benefactors. Involved in this isolation are also several Arab governments which, undoubtedly, have done very little to break the Israeli siege on Gaza.

The Russia-Hamas closeness is already paying dividends. On February 17, shipments of the Russian COVID-19 vaccine, Sputnik V, have made it to Gaza via Israel, a testament to that growing rapport.

While Russia alone cannot affect a complete paradigm shift in the case of Palestine, Hamas feels that a Russian alternative to the blind and conditional American support for Israel is possible, if not urgent.

Recently, we interviewed Dr. Daud Abdullah, the author of ‘Engaging the World: The Making of Hamas’s Foreign Policy’, and Mr. Na’eem Jeenah, Director of the Afro-Middle East Center in Johannesburg, which published Dr. Abdullah’s book.

Abdullah’s volume on Hamas is a must-read, as it offers a unique take on Hamas, liberating the discussion on the Movement from the confines of the reductionist Western media’s perception of Hamas as terrorist – and of the counterclaims, as well. In this book, Hamas is viewed as a political actor, whose armed resistance is only a component in a complex and far-reaching strategy.

As Moscow continues to cement its presence in the region by offering itself as a political partner and, compared with the US, a more balanced mediator between Israel and the Palestinians, Hamas sees the developing Russian role as a rare opportunity to break away from the US-Israel imposed isolation.

“Russia was a member of the Quartet that was set up in 2003 but, of course, as a member of the (United Nations) Security Council, it has always had an ability to inform the discourse on Palestine,” Abdullah said, adding that in light of “the gradual demise of American influence, Russia realized that there was an emerging vacuum in the region, particularly after the (Arab) uprisings.”

“With regard to Hamas and Russia the relationship took off after the (Palestinian) elections in 2006 but it was not Hamas’s initiative, it was (Russian President Vladimir) Putin who, in a press conference in Madrid after the election, said that he would be willing to host Hamas’s leadership in Moscow. Because Russia is looking for a place in the region.”

Hamas’s willingness to engage with the Russians has more than one reason, chief among them is the fact that Moscow, unlike the US, refused to abide by Israel’s portrayal of the Movement. “The fundamental difference between Russia and America and China … is that the Russians and the Chinese do not recognize Hamas as a ‘terrorist organization’; they have never done so, unlike the Americans, and so it made it easy for them to engage openly with Hamas,” Abdullah said.

In his book, Abdullah writes about the 1993 Oslo Accords, which represented a watershed moment, not only for Hamas but also for the entire Palestinian liberation struggle. The shift towards a US-led ‘peace process’ compelled Hamas to maintain a delicate balance “between strategic objectives and tactical flexibility.”

Hamas sees foreign relations as an integral and important part of its political ideology and liberation strategy. Soon after the Movement emerged, foreign policies were developed to help its leaders and members navigate this tension between idealism and realism. This pragmatism is evident in the fact that Hamas was able to establish relations with the regimes of Muammar Gaddhafi in Libya and Bashar al-Assad in Syria, both of whom were fiercely opposed to the Muslim Brotherhood.” 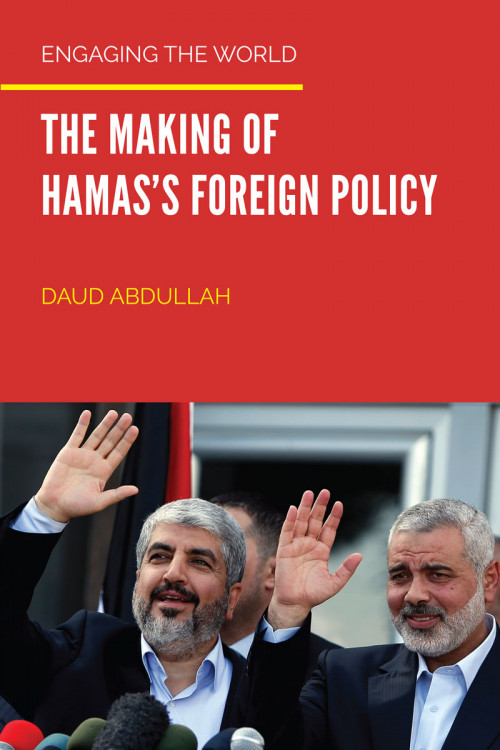 In our interview, Abdullah elaborated:

From the very beginning, Hamas adopted certain principles in respect to its international relations and, later on, in the formation of a foreign policy. Among these, there is a question of maintaining its independence of decision-making; non-alignment in conflicting blocks, avoidance of interference in the affairs of other states.”

Mr. Jeenah, an accomplished writer himself, also spoke of the “delicate balance.”

“It is a delicate balance, and a difficult one to maintain because, at this stage, when movements are regarded and regard themselves as liberation movements, they need to have higher moral and ethical standards than, for example, governments,” Jeenah said.

For some reason, we expect that governments have to make difficult choices but, with liberation movements, we don’t, because they are all about idealism and creating an ideal society, etc.”

Jeenah uses the South Africa anti-apartheid struggle which, in many ways, is comparable to the Palestinian quest for freedom, to illustrate his point:

When the liberation movement in South Africa was exiled, they took a similar kind of position. While some of them might have had a particular allegiance to the Soviet Union or to China, some of them also had strong operations in European countries, which they regarded as part of the bigger empire. Nevertheless, they had the freedom to operate there. Some of them operated in other African countries where there were dictatorships and they got protection from those states.”

Hamas and the Question of National Unity

In his book, which promises to be an essential read on the subject, Abdullah lists six principles that guide Hamas’s political agenda. One of these guiding principles is the “search for common ground.”

In addressing the question of Palestinian factionalism, we contended that, while Fatah has failed at creating a common, nominally democratic platform for Palestinians to interact politically, Hamas cannot be entirely blameless. If that is, indeed, the case, can one then make the assertion that Hamas has succeeded in its search for the elusive common ground?

But the question of national unity, however coveted and urgently required, is not just controlled by Palestinians.

“The PLO is the one that signed the Oslo Accords,” Abdullah said, “and I think this is one of Hamas’s weaknesses: as much as it wants national unity and a reform of the PLO, the fact of the matter is Israel and the West will not allow Hamas to enter into the PLO easily, because this would be the end of Oslo.”

On Elections under Military Occupation

On January 15, Abbas announced an official decree to hold Palestinian elections, first presidential, then legislative, then elections within the PLO’s Palestine National Council (PNC), which has historically served as a Palestinian parliament in exile. The first phase of these elections is scheduled for May 22.

But will this solve the endemic problem of Palestinian political representation? Moreover, is this the proper historical evolution of national liberation movements – democracy under military occupation, followed by liberation, instead of the other way around?

Jeenah spoke of this dichotomy: “On the one hand, elections are an opportunity for Palestinians to express their choices. On the other hand, what is the election really? We are not talking about a democratic election for the State, but for a Bantustan authority, at greater restraints than the South African authority.”

Moreover, the Israeli “occupying power will not make the mistake it did the last time. It will not allow such freedom (because of which) Hamas (had) won the elections. I don’t think Israel is going to allow it now.”

Yet there is a silver lining in this unpromising scenario. According to Jeenah, “I think the only difference this election could make is allowing some kind of reconciliation between Gaza and the West Bank.”

Hamas, the ICC and War Crimes

Then, there is the urgent question of the anticipated war crime investigation by the International Criminal Court (ICC). Yet, when the ICC agreed to consider allegations of war crimes in Palestine, chances are not only alleged Israeli war criminals are expected to be investigated, but the probe could potentially consider the questioning of Palestinians, as well. Should not this concern Hamas in the least?

In the Israeli wars on Gaza in 2008, 2012, and 2014, Hamas, along with other armed groups had no other option but to “defend the civilian population,” Abdullah said, pointing out that the “overriding concept” is that the Movement “believes in the principle of international law.”

If Hamas “can restore the rights of the Palestinian people through legal channels, then it will be much easier for the Movement, rather than having to opt for the armed struggle,” Abdullah asserted.

Undoubtedly, it is crucial to understand Hamas, not only as part of the Palestine-related academic discourse, but in the everyday political discourse concerning Palestine; in fact, the entire region. Abdullah’s book is itself critical to this understanding.

Jeenah argued that Abdullah’s book is not necessarily an “introductory text to the Hamas Movement. It has a particular focus, which is the development of Hamas’s foreign policy. The importance of that, in general, is firstly that there isn’t a text that deals specifically with Hamas’s foreign policy. What this book does is present Hamas as a real political actor.”

The evolution of Hamas’s political discourse and behavior since its inception, according to Jeenah, is a “fascinating” one.

“This book challenges successfully the common misrepresentation of Hamas in the West. It is a must-read for anyone engaged with the Palestine issue and interested in an honest introduction to this important Palestinian Movement.”

Romana Rubeo is an Italian writer and the Managing Editor of The Palestine Chronicle. Her articles appear in many online newspapers and academic journals. She holds a Master’s Degree in Foreign Languages and Literature and specializes in audio-visual and journalism translation.

Ramzy Baroud is a journalist and the Editor of The Palestine Chronicle. He is the author of five books. His latest is “These Chains Will Be Broken: Palestinian Stories of Struggle and Defiance in Israeli Prisons” (Clarity Press). Dr. Baroud is a Non-resident Senior Research Fellow at the Center for Islam and Global Affairs (CIGA) and also at the Afro-Middle East Center (AMEC). His website is www.ramzybaroud.net

Another Step Back for Biden: Attack on Syria Draws Establishment Cheers

Emboldened by Trump and Netanyahu, Jewish Settler Terrorism is Spiking