WASHINGTON, DC – President Donald Trump has been sitting in bed, starring at a paused image of the television show… 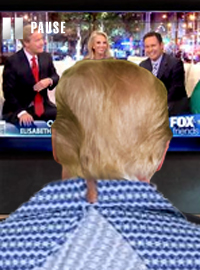 WASHINGTON, DC – President Donald Trump has been sitting in bed, starring at a paused image of the television show “Fox and Friends” for three hours, waiting for the program to continue.

“(Trump) has no idea that the TV is paused. He’s just sitting there watching it, waiting for the people to continue talking,” said head of Trump’s Secret Service detail, Ken Posher. “God, it’s been over three hours now and Trump is just sitting there, in his bed, with his fucking hamburgers, starring at his TV that is paused. Three fucking hours now. Every day we are reminded that Trump is a dumb, dumb man. Historically dumb.”

Early this morning several of Trump’s advisors met with Trump in his bedroom to discuss a development in an international conflict. During the meeting one of the advisors paused the TV.

“We went in to Trump’s bedroom because, well, it was before 11 am so that’s where he was. We had some very serious things to talk to him about,” said Trump Advisor, Wayne Capatch. “He wasn’t paying attention to us because the TV was on so (John) Kelly paused the TV to get Trump’s full attention. That didn’t work very well. (Trump) just paused too, like he was controlled as well. But then he started asking why (the show’s hosts) weren’t talking. Eventually Kelly just tossed the remote back to Trump and we all left the room.”

Since the meeting White House staffers have been looking for the remote to un-pause the TV but they have so far been unable to find it.

“We’ve actually sent several different staffers dressed as housekeeping into Trump’s bedroom to see if we can find the remote but we think Trump is sitting on it so no one touches his remote again,” said Capatch. “(Trump) does that a lot. If he wants to keep something to himself, he sits on it. He thinks that’s the safest place in the world. I mean , it is, because no one wants to dig under his ass, but it gets really bad with candy. (Trump) loves sitting on candy. Then eating the candy. That he’s been sitting on for who knows how long. Fuck, this guy is an idiot.”

When asked if he is hiding the remote, Trump shouts that he is watching his “stories” and to leave him alone.

White House press secretary Sarah Sanders said the President is working hard and “deep in thought” while he is starring at the paused screen.

“Yes, I know the President was supposed to leave for a meeting with India’s Prime Minister but he is very busy at the moment thinking about how to make America greater again. That’s his primary concern all the time. He is not just sitting there starring at a paused TV without a single thought going through his head,” said Sanders. “No, he’s thinking about walls and stuff. And immigrants. And, um, foreign…policy?”

Insiders say that staff members are working on a plan to cut power to Trump’s bedroom if the President doesn’t leave his bed soon.

“If that fucking idiot doesn’t come out of his fucking room in the next 20 minutes I’m going to shut down the power and tell him it was Hillary’s fault,” said White House Chief of Staff, John Kelly. “That should get him pissed off enough to get the fuck out of bed. That fucking idiot.”