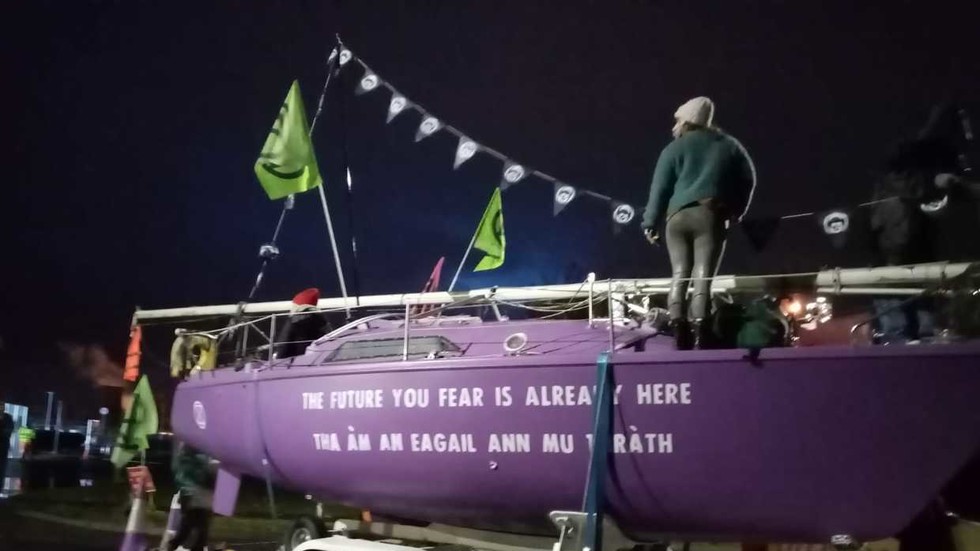 Protesters belonging to the climate change activism group Extinction Rebellion have attempted to blockade access to an oil refinery in Grangemouth, Scotland, claiming that the plant’s operator is the country’s biggest polluter.

Demonstrators used two boats to block two roads leading to the Ineos plant and the company’s headquarters. A small group of protesters also chained themselves together at the gates of the refinery, telling local media that they plan to block the entrance to the plant until at least the end of the day.

The boats used to block the roads were also used to relay Extinction Rebellion’s (XR) grim ecological forecast. “The future you fear is already here,” warned a message painted on one of the vessels.

The radical environmental group, known for its theatrical protests and headline-grabbing acts of civil disobedience, claims that the petrochemical manufacturer is Scotland’s largest polluter. The Ineos site is Scotland’s only crude oil refinery.

Annie Lane, 26, an activist from Glasgow, told the media that XR was blockading the Ineos plant to “expose the climate destruction” that the company is allegedly causing, claiming that the world was “running out of time” to take action to prevent an environmental catastrophe.

A police spokesman said that law enforcement personnel were on site and were liaising with the protest organizers. He confirmed that two roads had been blocked and asked drivers to avoid the area.

Also on rt.com Climate activists chain themselves to objects at ‘occupation’ camp outside Swiss parliament

A similar protest was held by XR activists in Switzerland last month, when several hundred protesters occupied the square in front of the country’s parliament building in Bern, and chained themselves to objects to prevent police from forcibly removing them.

US election: Joe Biden pushes forward with plans for office