In the video, self-appointed border guards have rounded up hundreds of migrants and forced them to sit near an active…

In the video, self-appointed border guards have rounded up hundreds of migrants and forced them to sit near an active train track in New Mexico. Armed with rifles, the militia members point bright flashlights into the immigrants’ faces as the exhausted and disheveled adults and children turn their eyes downward to avoid the glare.

“Lots and lots of coughing, folks,” a woman recording the video says, alluding to a right-wing conspiracy theory that people from Mexico and Central America are carrying infectious diseases. “This is what’s coming across our border. How bad does it get before we actually build the wall?”

“We’re just allowing people from all over the world to rush our borders,” a militiaman behind her says. “Bottom line, you got to support Donald Trump. He’s the only guy telling the truth.”

In response to the video — which was recorded on April 16, posted on social media and YouTube the next day, and then broadcast by major news networks — the American Civil Liberties Union urged U.S. and New Mexico authorities not to allow “racist and armed vigilantes to kidnap and detain people seeking asylum.”

Hector Balderas, New Mexico’s attorney general, admonished the militia members, who call themselves the United Constitutional Patriots. “These individuals should not attempt to exercise authority reserved for law enforcement,” he wrote in a statement.

Three days after the video appeared online, the U.S. government seemed to take action. Larry Hopkins, the Patriots’ leader, was arrested and charged in the U.S. District Court of New Mexico with being a felon in possession of firearms. News reports suggested a cause-and-effect relationship between the immigrant roundup and the arrest. “This militia group detained migrants at the border,” a CNN headline read. “Then their leader got arrested.”

But while outrage generated by the video may have driven the government to arrest Hopkins, the charge against him has nothing to do with kidnapping terrified people and their children at gunpoint. In fact, the charge against Hopkins relates to an incident that occurred more than 18 months earlier, when FBI agents found the militia leader with a cache of weapons and suspected him of plotting to kill Democratic Party leaders and funders. At the time, federal officials chose not to charge Hopkins. The FBI and the Justice Department declined to comment about the investigation or the timing of Hopkins’s prosecution.

Hopkins’s case is emblematic of how the FBI and federal prosecutors often treat right-wing extremists, ignoring offenses or bringing lesser charges for crimes that would almost certainly result in aggressive federal prosecutions if they were committed by other types of extremists.

Take the case of Christopher Daniels, an African-American gun rights advocate, who came to the FBI’s attention around the same time Hopkins did. The FBI raided both men’s homes within months of each other and, in both cases, found weapons they had reason to believe should not have been there. But in Hopkins’s case, the FBI decided merely to confiscate the guns and wait 18 months before doing anything else, whereas in Daniels’s, the FBI quickly arrested him.

While Hopkins remained free to terrorize immigrants, Daniels was jailed for five months, losing his home and his job.

The primary difference between them wasn’t just race, but ideology. Federal agents appeared to make a clear decision to view Hopkins, a right-wing militia leader, as less dangerous than Daniels, a supposed “black identity extremist.” The term was coined by the FBI Counterterrorism Division to describe a supposed ideology based on the theory that police brutality against African-Americans justifies retaliatory violence. Critics have questioned whether “black identity extremism” exists at all, describing it as “fiction” and “fantasy.”

This double standard is common in federal prosecutions. An Intercept analysis earlier this year found that right-wing extremists are rarely prosecuted under anti-terrorism laws, even when their crimes meet the federal definition of terrorism. Since the 9/11 attacks, just 34 right-wing extremists have been charged under anti-terrorism laws, compared to more than 500 alleged international terrorists, according to The Intercept’s analysis.

In fact, if not for the video of the United Constitutional Patriots and the anger it sparked, Hopkins might never have been charged at all. 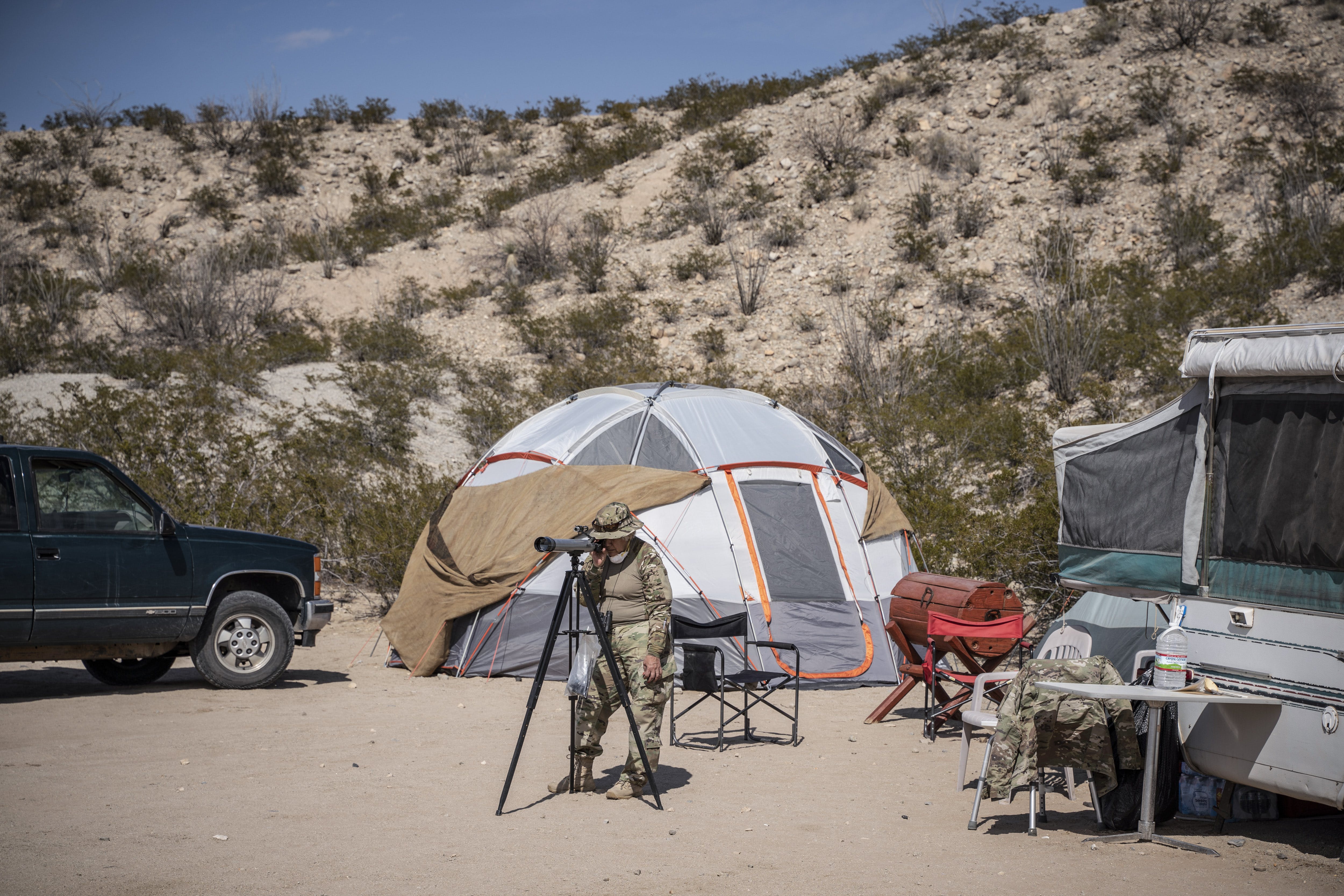 A member of the United Constitutional Patriots militia monitors the U.S.-Mexico border in Anapra, N.M., on March 20, 2019.

Militia “Commander” Gets an Initial Pass

The Lakeside Ranch Trailer Park is in Flora Vista, New Mexico, about 180 miles north of Albuquerque near the Colorado border. Locals had reported to the FBI in October 2017 that the trailer park was the “base” for the United Constitutional Patriots and that as many as 20 militia members, armed with AK-47 rifles and other firearms, would gather there. Hopkins, the so-called commander of the militia, lived in a mobile home inside the park.

Hopkins told people that his group was training to assassinate George Soros, Hillary Clinton, and Barack Obama because of their supposed support for antifa, a collection of anti-fascist groups, according to an FBI report that does not specify the source for this information.

Two months after receiving information about the apparent assassination plots, FBI agents knocked on Hopkins’s door. Hopkins invited them into a room he called his office; the federal agents saw firearms in the closet. Since Hopkins has prior convictions — his offenses include possessing a loaded firearm in Michigan in 1996, pretending to be a police officer in Oregon in 2006, and failing to pay nearly $ 70,000 in child support in South Dakota in 2011 — he was not permitted to own firearms.

But Hopkins told the FBI agents that the guns weren’t his. Instead, he said, they belonged to his common-law wife, Fay Sanders Murphy. He agreed to allow the FBI to search the home, and as the agents walked through, Hopkins showed them where the guns were kept. From his statements, which the agents recorded, Hopkins seemed to know a lot about weapons that he purported were not his.

“The shotgun is loaded, so I will let you unload it,” he told the agents when presenting one of the guns to them.

Indeed, Hopkins knew where all the guns were and which ones were loaded. He pointed to a black tactical vest. Holstered in the vest was a 9mm handgun. “That’s my black [handgun] right there, and it is loaded,” Hopkins said.

The agents confiscated nine guns and various kinds of ammunition and left. Hopkins wasn’t charged with a crime until more than 18 months later, on April 20, after his vigilante border patrol caught the public’s attention and the Justice Department came under pressure to respond. Following Hopkins’s arrest, the remaining members of the United Constitutional Patriots started calling themselves the Guardian Patriots. 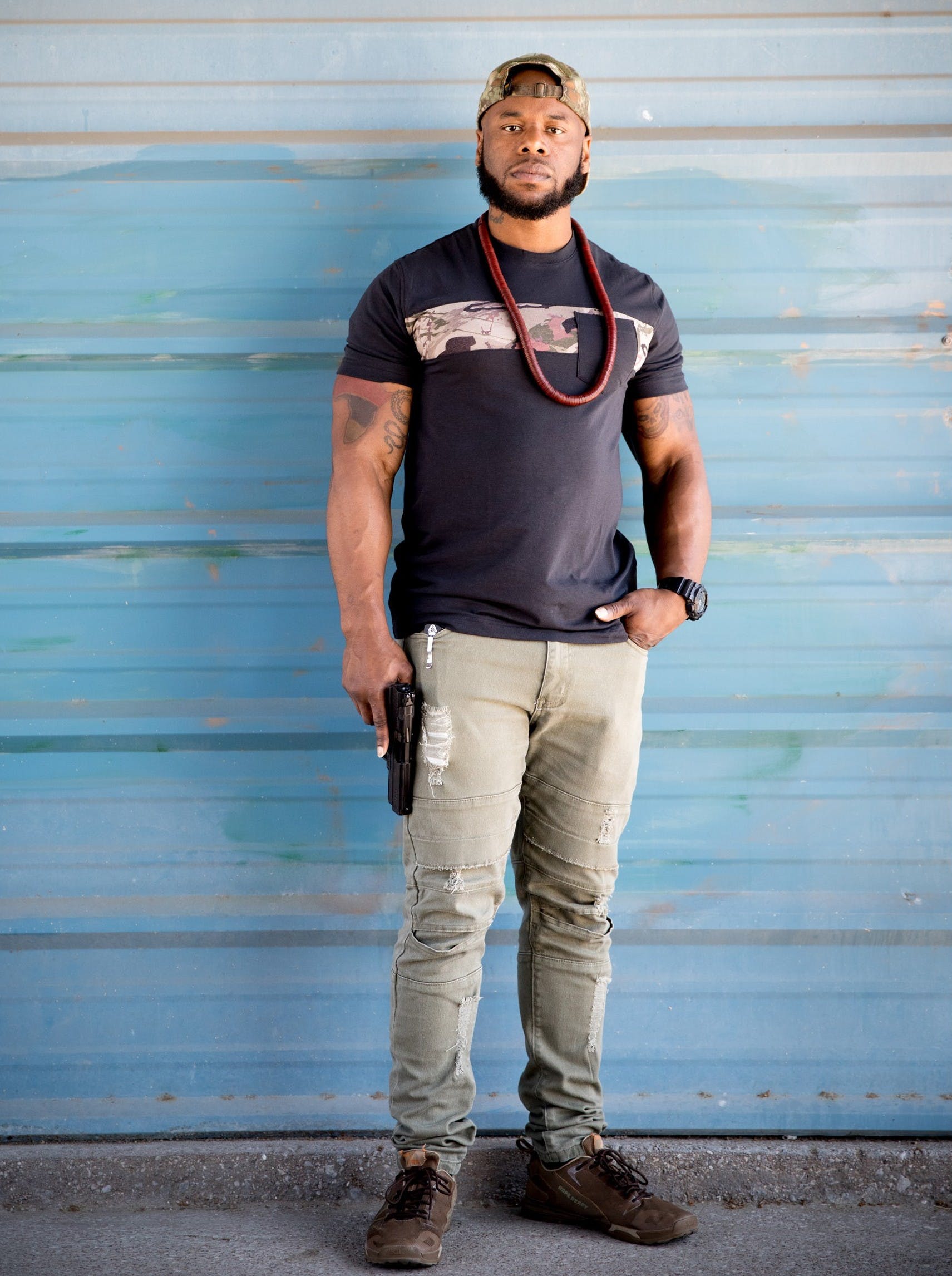 Rakem Balogun, photographed near his home in Dallas, Texas, in 2018.

Daniels came to the FBI’s attention after Infowars, Alex Jones’s right-wing conspiracy-mongering website, posted a video that showed him at a rally in Austin, Texas, where Infowars is based, protesting police brutality. Daniels was not secretive about his interest in guns. He had co-founded two gun ownership organizations: one that promoted weapons training and community service, and another that advocated for citizens to carry firearms.

But since Daniels had been convicted of misdemeanor domestic violence in Tennessee, agents believed that his possession of a gun would be illegal under federal law. While investigating Daniels after the Infowars video was posted, FBI agents learned that he was traveling to Detroit to attend a firearms training. Daniels was not hiding anything; in fact, agents discovered his plans because he’d posted flyers for the training on his Facebook page. The FBI then confirmed that Daniels had checked in a firearm for his flight to Detroit and his return flight to Dallas.

When Daniels returned from Detroit, the FBI raided his apartment and seized a .38 special handgun and an assault rifle with a fully loaded magazine, as well as ammunition.

FBI agents normally wouldn’t concern themselves with someone like Daniels, but at his detention hearing, prosecutors leaned on “black identity extremism” as way of claiming that Daniels was dangerous. They submitted as exhibits inflammatory posts that Daniels — who goes by the name Rakem Balogun — had written on Facebook. These included posts about Micah Xavier Johnson, who ambushed police officers in Dallas in 2016, killing five and injuring nine. “Today one year ago one Black Man brought Dallas Pig Department to their knees,” Daniels wrote.

“We Know We’re Not Doing Enough”

Michael McGarrity, the FBI’s assistant director for the Counterterrorism Division, testified on June 4 before the House Oversight Committee that the FBI has quietly retired the “black identity extremism” label for defendants such as Daniels.

“The designation no longer exists?” Rep. Ayanna Pressley, a Democrat from Massachusetts, pressed McGarrity after he made the statement.

“It hasn’t existed since I’ve been here for 17 months,” McGarrity answered, referring to the length of his assignment to the Counterterrorism Division.

Meanwhile, the FBI and other federal agencies are still trying to develop a plan to combat white supremacist and other right-wing extremist violence in the United States, counterterrorism officials acknowledged in the Congressional hearing. Elizabeth Neumann, an assistant secretary at the Department of Homeland Security, said that her agency is working on “a prevention framework” to be rolled out in the coming years. “We know we’re not doing enough,” Neumann admitted.

The FBI’s comparatively gentle treatment of Hopkins comes as the right-wing conspiracy theories that appear to have influenced him — such as the loony notions that financier Soros is supporting antifa and that immigrants are bringing diseases and widespread crime to the United States — have inspired a series of domestic terrorism plots and attacks since Trump’s 2017 inauguration.

“I think FBI agents and analysts tend to view someone like [Daniels] as a direct threat to them and their law enforcement partners, but they don’t see the same from nativist militants like Hopkins,” said Michael German, a former FBI agent who is now a fellow at the Brennan Center for Justice. “Instead, they see these nativist militants targeting the groups they are looking at as lawbreakers.”

The FBI assessment of so-called black identity extremists inflated the threat to law enforcement, German said, while a paper the agency released around the same time on white supremacist violence took a much more moderate approach, identifying it as, in German’s summation, “a persistent but manageable threat.”