The Brexit Party leader may have finally confessed that Brexit has been a Russian op all along. That, or he… 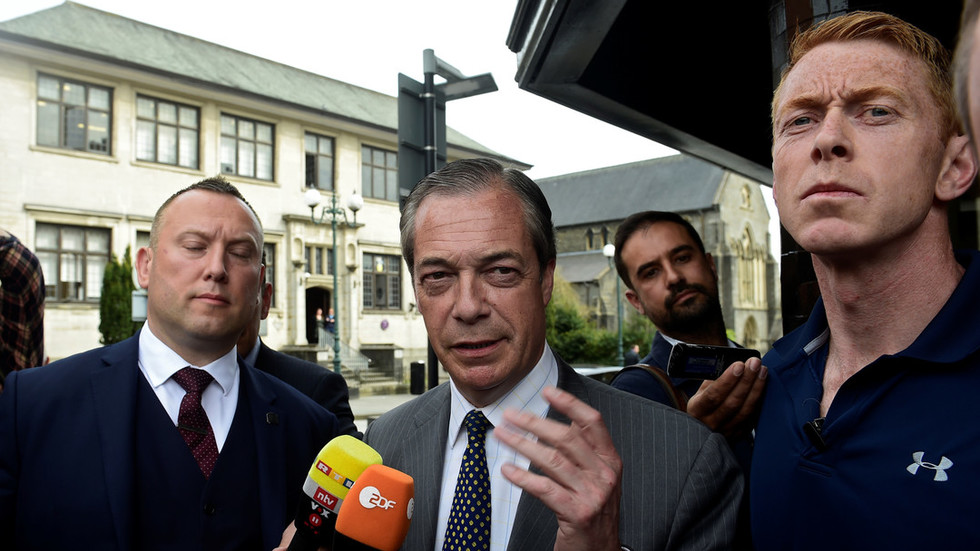 The Brexit Party leader may have finally confessed that Brexit has been a Russian op all along. That, or he simply cut off a reporter, who was hounding him with questions about Leave campaign donor Arron Banks.

Former UKIP head Nigel Farage, whose new political party is currently crushing competition in the European Parliament election campaign, was chased by journalist Matt Frei for a report shown by Channel 4 on Thursday. The news outlet said Arron Banks, the millionaire supporter of the Brexit movement, was also bankrolling Farage’s personal lifestyle, and Frei went to doorstep Farage during his visit to Merthyr Tydfil, Wales, on Wednesday.

Farage, who is well-known for using a condescending and rude tone when asked questions he doesn’t like, is shown deflecting Tydfil’s inquiries about who pays for his “operation” alternating between suggesting the reporter ask something relevant to the European Parliament election, sarcasm and simple silence.

In the end, Tydfil catches Farage for one final question: “Who is paying for your bodyguards?” to which he replies: “Russians.” For those not following British politics: some people believe Banks was an intermediary, who had funneled Russian money into the Leave campaign, which makes for a comforting way to explain away the mess that the UK landed in with Brexit.

The comeback seemed to be to the taste of Farage supporters, but some commentators apparently took the joke quite seriously. Radoslaw Sikorski, a former Polish foreign minister in the Donald Tusk government, responded to the video by calling Brexit “the second most successful Russian influence operation this century.” He went on to accuse Poland’s incumbent justice minister of being another Russia-Brexit connection.

Looks like Brexit is the second most successful Russian influence operation this century. https://t.co/x60Qco1E5A

Labour MP John McDonnell called for an investigation into Farage campaign finances in a tweet. It was not clear if it was the “Russians” quip in particular that triggered the response.

Fellow legislator Zac Goldsmith, a formerly Conservative independent, rebuked Channel 4’s line of questioning, pointing out that in a better world a politician would not require expensive personal protection.

Quite a few British establishment media outlets have been scrutinizing Farage in the run up to the election next week. Whether those attacks manage to sink his party’s bid is a big question. After all, he has “the Russians” in his corner, so all resistance may be futile!

I’m not saying it’s not important – but the “Arron Banks money” shtick has barely influenced the level of Leave support in the country for three years despite widespread coverage and lots of doorstepping. What makes them think it’s going to cut through now?