WASHINGTON D.C. — A new report from Washington D.C.-based think tank the Center for Strategic and International Studies (CSIS) concludes that the U.S. government should work closely with social media companies to ensure that protest movements around the world result in an outcome more conducive to American interests. Along with intern Riley McCabe, the organization’s senior fellow, Samuel Brannen, argued that the White House, State Department, and intelligence community must explore deeper coordination with major tech companies that provide global media platforms:

The U.S. government should think creatively about public-private partnerships that can expand its toolkit to defend the legitimate rights of political protestors globally, including preserving the digital rights of peaceful democratic activists while muting harmful mis- and disinformation from violent state and nonstate actors seeking to tip the balance in various countries.”

While the language used couches the potential move as defending democracy, the rest of the article makes clear that the fight of the future lies between the democratic U.S. and other “like-minded governments” versus “authoritarian states — especially China and Russia.”

Widespread protests were a feature of 2020, engulfing 68 nations, according to the CSIS. However, they appear to be most preoccupied with those in China and Russia. The CSIS applauded American sanctions on Russia that followed the imprisonment of anti-Putin politician Alexei Navalny, calling them “a step in the right direction” — phrasing which suggests they want to see far more aggressive action taken against Moscow. Beijing’s moves against the Hong Kong protests, meanwhile, amounted to the “totalitarian conclusion” and the destruction of democracy in the city-state.

The U.S. has been intimately involved in protest movements against its enemies. In 2014, then-vice-president Joe Biden traveled to Ukraine to gin up the protagonists of the anti-Moscow Maidan Revolution, with senior U.S. official Victoria Nuland even photographed handing out cookies to protestors. Washington was also a major actor in the Hong Kong protests, funding and training many of its leaders, and spending at least $ 29 million on “pro-democracy” projects in the region.

More Americans were arrested after barely a week of protests following the killing of George Floyd than in over one year of demonstrations in Hong Kong, and protest organizers and journalists alike are still facing lengthy sentences for their roles in them. Yet, the CSIS presents the U.S. response to internal strife as exemplary, stating that “the United States is uniquely positioned to make its own handling of political dissent and protest a centerpiece of U.S. outreach to the world,” claiming that it can “lead not only by the example of our power, but by the power of our example.”

A bastion of neocon thought

The CSIS is one of the most influential and well-connected think tanks in Washington. War planners like Henry Kissinger and Zbigniew Brzezinski, military commanders like Brent Scowcroft and James L. Jones, and former Secretaries of Defense such as William S. Cohen and Harold Brown occupy key positions on its advisory board.

The organization is also funded by virtually every Western government, major weapons contractors including Raytheon, Northrop Grumman, and Boeing, as well as the foundations of notable billionaires like Pierre Omidyar, Bill Gates, and Charles Koch. It can also boast current Secretary of State Anthony Blinken as a former senior fellow at the think tank. It is, therefore, reasonable to assume that its output represents a dominant strain of thinking within the foreign policy establishment. 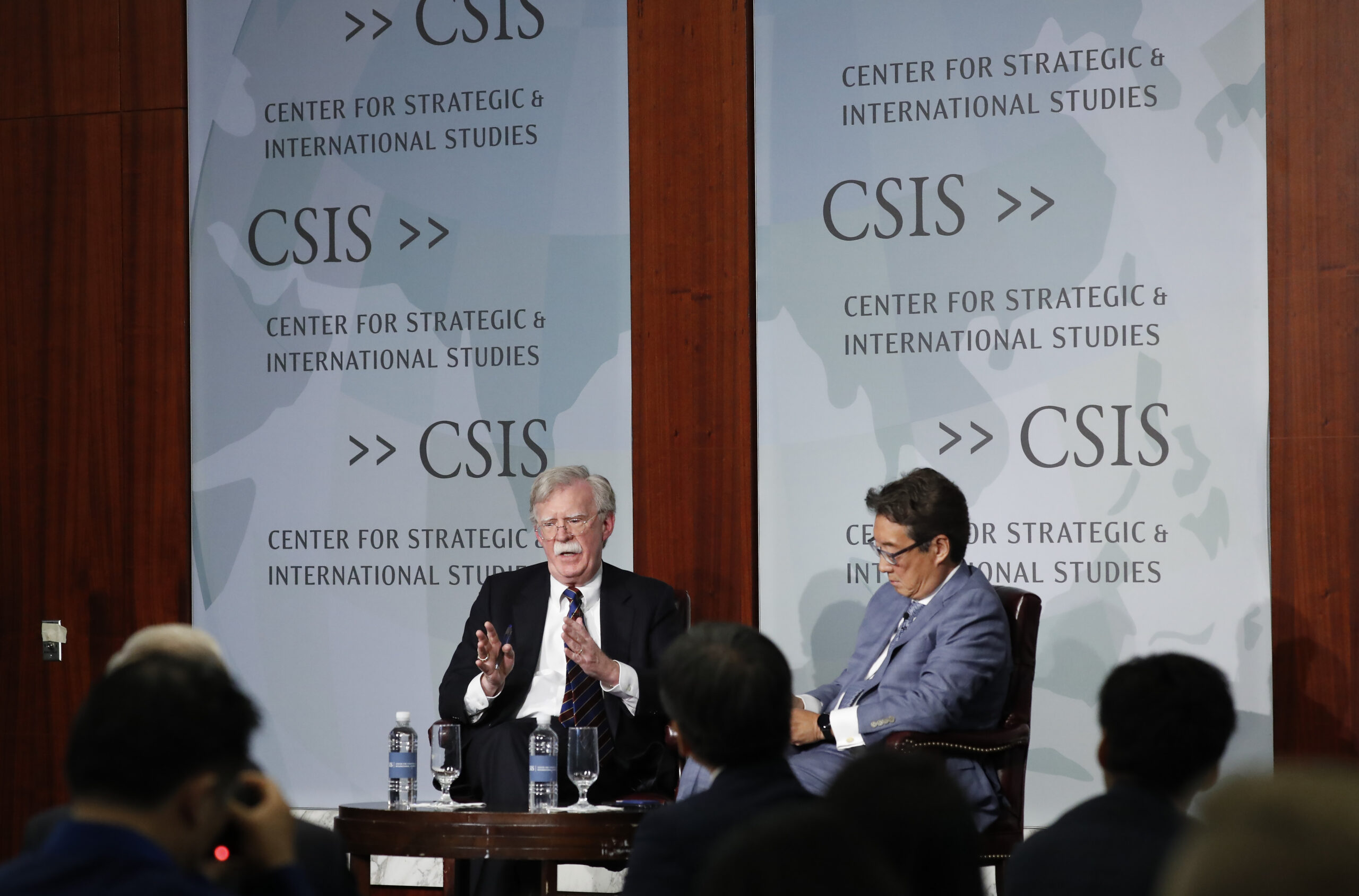 “The CSIS masquerades as an independent, objective think tank, but has historically close ties to U.S. intelligence and the military industrial complex,” Tim Shorrock of The Nation told MintPress News in 2019, “it’s abundantly clear that everything it does reflects the interests of its government and corporate donors, which include every major U.S. defense contractor.”

The think tank has also supported regime change through protest movements before. In Bolivia, for example, it applauded the far-right takeover of the country in November 2019, falsely suggesting that the previous month’s elections were fraudulent while presenting the military handpicking obscure senator Jeanine Añez to be president as “according to the Bolivian constitution,” which it certainly was not.

A few months earlier, it went past just promoting protest movements in Venezuela to hosting a secret conference exploring the feasibility of a U.S. invasion of the country in order to finally overthrow the ruling United Socialist Party.

The United States is already engaged in online warfare against its enemies and long ago enlisted the support of Silicon Valley corporations. On the advice of similarly hawkish think tanks, Twitter and other social media platforms have taken action against what they claim were foreign government attempts to game their services, deleting hundreds of thousands of accounts supposedly linked to enemy regimes, be they Russian, Chinese, Iranian, Cuban or Venezuelan. Yet they appear to never be able to find the American government or its allies doing the same thing, despite the fact that it was revealed 10 years ago that the U.S. has similar influence projects.

In their book titled, “The New Digital Age: Reshaping the Future of People, Nations and Business,” Eric Schmidt and fellow Google executive Jared Cohen wrote, “What Lockheed Martin was to the twentieth century, technology and cyber-security companies will be to the twenty-first,” suggesting that the new battleground is virtual, and that big tech companies are willing to be the U.S.’ top weapon in maintaining global supremacy.

While that prediction might have seemed surprising eight years ago when the book was first published, a number of moves in recent years suggest that Schmidt and Cohen will be proven correct. In 2018, Facebook announced it was partnering with a NATO cutout organization, the Atlantic Council, to root out disinformation and promote accurate data. Last month, it went further, hiring a former NATO press officer as its new intelligence chief. Meanwhile, Jessica Ashooh left her job as a Deputy Director of Middle Eastern Strategy for the Atlantic Council to join Reddit as its Director of Policy.

One notable case of the U.S. government directly working with social media to inflame protests was in Iran, where the Obama administration convinced Twitter to delay a temporary maintenance shutdown of its operations in order to aid the coordination efforts of anti-government demonstrations. Last year, the Trump administration ordered Facebook to suppress any positive mention of Qassem Soleimani on its platforms. Trump had recently given the order to assassinate the statesman, sparking global indignation. Facebook complied with the request, stating that, “We operate under U.S. sanctions laws, including those related to the U.S. government’s designation of the Iranian Revolutionary Guard Corps (IRGC) and its leadership.” Soleimani was widely beloved in the country (a U.S. poll found over 80% of the public held a positive opinion of him). This meant that Facebook was suppressing the speech of Iranians talking to other Iranians in Farsi, sharing a majority opinion, all at the behest of the American president.

It is a standard response of authoritarian governments the world over to claim that protests against them are illegitimate, and spurred on by outside enemies intent on seeing them destroyed. This even happens in the U.S., where senior politicians have suggested that political strife of all sorts, from Colin Kaepernick’s kneeling to the George Floyd protests, to the storming of the Capitol Building on January 6, had been amplified by Russia. This latest CSIS offering will only add weight to those governments who see an American hand behind domestic dissent.

Alan MacLeod is Senior Staff Writer for MintPress News. After completing his PhD in 2017 he published two books: Bad News From Venezuela: Twenty Years of Fake News and Misreporting and Propaganda in the Information Age: Still Manufacturing Consent, as well as a number of academic articles. He has also contributed to FAIR.org, The Guardian, Salon, The Grayzone, Jacobin Magazine, and Common Dreams.

Never the Aggressor: Israel Is Convinced of Its Own Benevolence

No End in Sight: An Egyptian Man’s Ordeal in ICE Custody and the Plight of Indefinite Immigration Detention