A March 1995 headline in the Helena Independent Record, a Montana newspaper, lays it out starkly: “Black man told to…

A March 1995 headline in the Helena Independent Record, a Montana newspaper, lays it out starkly: “Black man told to go home — to Africa.” The article lists racist threats made against an unnamed “black political refugee from Liberia who has lived in Helena for about a year.” The subject of that article remained anonymous at the time, and he did not heed the suggestion. He stayed, and nearly 25 years later, he is the mayor of Helena and a Democratic candidate for the U.S. Senate.

In July 2019, the president of the United States told four Democratic congresswomen — including a refugee from Somalia — to “go back” to their home countries. The ensuing national debate brought Wilmot Collins’s early experiences in this country to the front of his mind. They also brought out the worst in his GOP opponent, incumbent Steve Daines, who stood alone among his colleagues in firmly defending Donald Trump’s attack on the four members of Congress.

Collins fled Liberia in the midst of the nation’s civil war, decamping to the relative safety of Ghana with his wife. “I was 92 pounds,” he recalled. “My wife was 87. We were literally dying of starvation.”

Maddie Collins, his wife, had spent time during high school in the United States, and she called her former host family to ask for help. They did everything they could and eventually helped her make her way back to the U.S., where she got a scholarship for nursing school. Two weeks before she left Ghana, the family learned that she was pregnant. Her daughter would be born in Helena. More than two years later, Wilmot Collins won the chance to join them, landing on February 17, 1994. There was snow everywhere, the first time he’d seen it in person.

Still, it was the warmest he had felt in years, he said, as a large crowd met him at the airport with a “welcome home” sign. Rushing out of the crowd was his 2-year-old daughter. It was the first time he’d seen her.

The next year, a different kind of sign would offer a much less welcoming message.

First, a mock airline ticket came anonymously in the mail. “Here’s your ticket. Go back to Africa,” he recalled the note reading. Not long after, he parked his car outside a local grocery store, and when he returned, he found a note under the windshield wiper, advising that it was his “final warning” to go back to Africa. His was the only Liberian family in the overwhelmingly white town, he said.

The notes stopped, but the next year, a neighbor knocked on his door to alert him to a new act of vandalism. “KKK” and “Go Back To Africa” had been scrawled on his garage door. His wife asked what the commotion was, and he tried to keep it from her, but, he said, she’s not the type who can be fooled. He made sure that his daughter was out of earshot and let her know about the graffiti. They reported the incident to the Montana Human Rights Network, a local anti-hate group.

It was what happened next, though, that convinced Collins that he was truly at home in Helena. One after the other, neighbors came by to help wash the garage door until it was clean.

The incidents had long been buried in the past, when Trump unburied them with his recent vitriolic remarks toward Reps. Alexandria Ocasio-Cortez, Ilhan Omar, Ayanna Pressley, and Rashida Tlaib.

Trump’s comments reminded Rachel Carroll Rivas, co-director of the Montana Human Rights Network, of the same admonition made to Collins in the 1990s. Collins responded at the time by joining the board of the network. Carroll Rivas dug up an old article from the local paper describing the threats and passed it to Collins, who remained anonymous in 1995 but has now decided to speak about the experience. Carroll Rivas confirmed to The Intercept that Maddie Collins had reported the garage door incident, which happened after the article was published, in real time. One key difference is that, as far as Collins knows, the FBI never learned the identity of the person or people who had insisted that he “go back to Africa,” but there is no mystery as to the identity of the man making the threat toward the congresswomen today.

Reflecting on Trump’s comments, Collins said it wasn’t the president’s remark that hurt him the most. Rather, it was the response that came from Daines, Montana’s Republican senator .

In a closed-door meeting of Republican senators last week, Daines was alone in standing up to defend Trump’s comments. On Twitter, he also proudly stood by the president.

Montanans are sick and tired of listening to anti-American, anti-Semite, radical Democrats trash our country and our ideals. This is America. We’re the greatest country in the world.

I stand with @realdonaldtrump. ??

“It didn’t hit me until our senator decided to get involved. Really, I thought he was speaking to me also. I’m no different from the lady from Somalia,” Collins said, referring to Omar. “The only difference is she came a little earlier than me in terms of age. She’s an American. I came as a refugee. I am an American. For the president to discount that and talk about ‘go back to Africa,’ it was a slap in the face.”

People outside of Montana may have missed some of the context behind Daines’s unusual decision to break with his senatorial colleagues and fully back the president: Collins is running against Daines for his Senate seat.

The national media, when it talks about the Montana Senate race, glosses over Collins to focus on the decision by popular Gov. Steve Bullock to pass on that race and bizarrely run for president instead. And Bullock appears to have little interest in helping Collins win; the mayor’s Federal Election Commission reports suggest that Bullock’s fundraising network has shied away from Collins as the Bullock team focuses on elevating his lieutenant governor to the top slot.

Montana is not out of reach for Democrats: Democratic Sen. Jon Tester has won three straight elections in Montana on a fairly populist platform. Collins, as unusual a candidate as could be concocted in Montana, threatens to scramble the typical calculus. The race will take a more partisan hue in 2020, with Trump at the top of the ticket, and Daines likely sees nationalizing it, and linking himself tightly to Trump, as his best bet for re-election.

Collins said that Daines called him to congratulate him on his mayoral victory, and they have met a handful of times but are not close. He doesn’t think that Daines meant what he said, but is simply exploiting a political opportunity. “Why didn’t any other senator get up to say that? I think it was a campaign stunt, because that is me,” he said. “Now don’t get me wrong, I am not saying, in no way, that Steve Daines is a racist. I do not believe that. But I think that was more political than being sincere about what he was saying, because he knew these women don’t hate this beautiful country.”

Daines did not respond to a request for comment. 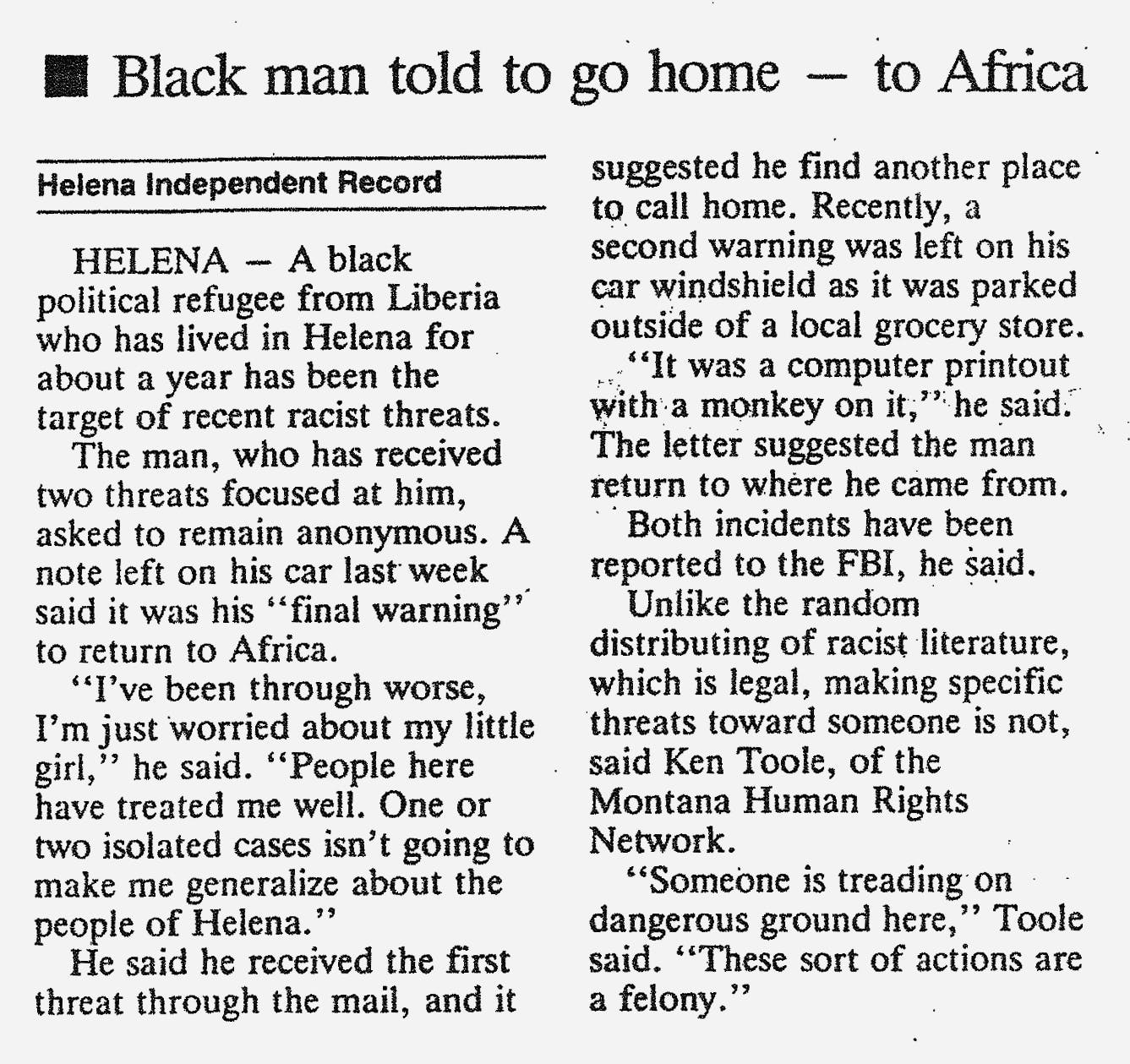 A story about Wilmot Collins, then anonymous, in the Helena Independent Record and archived by the Montana Human Rights Network from March 1995.

Back in 1995, Collins laughed off the first letter, but his host brother warned him to take the threat seriously. His host family alerted the FBI, and the local news covered the threats, though Collins wanted to remain anonymous. Still, he said, the town knew who the article was about. “We were the only Liberian refugees,” he said in an interview.

“I’ve been through worse. I’m just worried about my little girl,” reads a quote in the newspaper article. “People here have treated me well. One or two isolated cases isn’t going to make me generalize about the people of Helena.”

At one point while the threats were being lobbed at his family, Collins said, it appeared as if someone attempted to follow through on them. During the summer, he would leave the windows of his car open a crack to let the air flow through, and his seats had carpeted covers on them. Once, when he opened his car door, he found six or seven matchsticks that had been lit and tossed onto a seat in what looked like an attempt to torch it. It failed. “We were praying it was just kids and their pranks. That was our prayer, but we knew better,” he said. He stopped leaving the windows cracked open.

All of it, though, paled in comparison to the outpouring of support from the people of Helena. “I had heard about racism everywhere,” he said, “but the reaction that I got from my community told me: I belong.”

Collins had read the spirit of his town correctly. Not only did residents rally around him and his family in the wake of the racist threats, but nearly 25 years later, they elected him mayor. Collins’s upset of a four-term incumbent in Helena made him the first black mayor of any town or city in Montana’s state history.