Illinois Gov. J.B. Pritzker has unveiled his graduated state income tax plan, which would raise taxes on those making more…

Illinois Gov. J.B. Pritzker has unveiled his graduated state income tax plan, which would raise taxes on those making more than $ 250,000 a year. Right now, the Illinois Constitution says everyone pays a 4.95 percent state income tax no matter what they earn.

The Democratic governor calls his plan a “fair tax,” on the grounds that a billionaire like himself should not pay the same amount as someone who only makes $ 100,000 or $ 30,000. But what makes a tax fair? 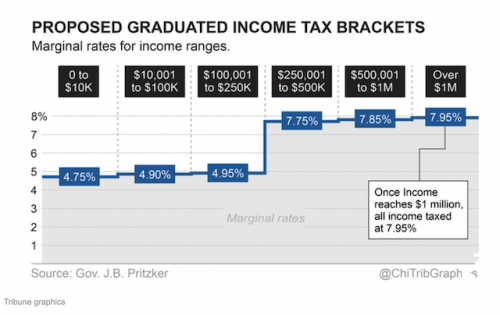 As this graphic from the Chicago Tribune shows, the bulk of small business owners make up the $ 250,001 to $ 500,000 bracket. A raise in taxes will stunt growth in a state that’s already bleeding population and jobs. Those small business owners will have to send more money to the government instead of reinvesting into their companies. Last year, surveys from two moving companies, North American Moving Services and United Van Lines National Movers, ranked Illinois as the top state that companies want to leave. Deron Lichte, president of Food Warming Equipment, told U.S. News & World Report that he had “no regrets about the move” to Tennessee.

Due to the high taxes, Illinois lost major corporations like General Mills, Mondelez International, and Butterball in the last five years. Even those with small businesses have left Illinois. Shane Beard owned two FastSigns franchises, but he became “fed up with the increasing tax burden and the unstable political climate.” Beard and his wife relocated to San Diego, California, where he purchased another FastSigns franchise.

The conservative think tank Illinois Policy looked at other states that replaced their high taxes with a fixed income rate, similar to what Illinois has now, and found prosperity. North Carolina did this six years ago. State Rep. Ken Waddell found the fixed income rate “made the state more attractive” and described it as “a talent draw.”

Pritzker’s plan includes more than just his “fair tax.” He also wants new taxes on marijuana, sports betting, insurance companies, and plastic bags, and he wants to raise taxes on cigarettes and e-cigarettes. Yet his plan comes nowhere near to what the state needs in order to close its budget gap, which stands at $ 3.4 billion. According to Illinois Policy’s research, at the most the proposal will raise $ 2.4 billion.

The group also found that in order to cover the $ 3.4 billion hole, the state would most likely have to raise taxes in all brackets. 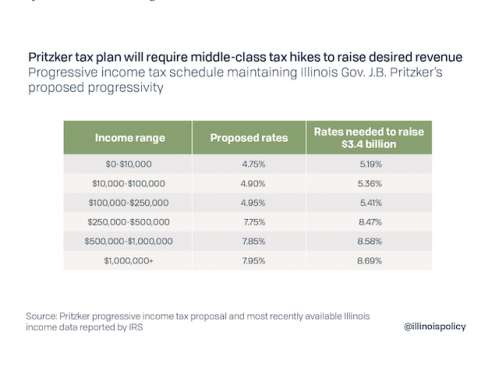 Pritzker’s plan can’t take effect for a while, since it requires an amendment to the state’s Constitution. Each chamber must approve the change by three-fifths. The vote then goes to the people. It can’t appear on the ballot any earlier than November 2020.

Pritzker points to neighboring states Wisconsin and Iowa, which have higher state income taxes, to prove his plan will work. He said in his budget address that he believes the state “can accomplish [a progressive income tax] with a more competitive rate structure than Wisconsin or Iowa.” He left out this important detail: Those states have balanced budgets.

Illinois spends, spends, spends. The state owes $ 8.5 billion in unpaid bills and $ 134 billion in unfunded pensions, along with the $ 3.2 billion budget deficit. Even if Pritzker closes the budget deficit, how will the state pay off the rest of its debt? How will the state handle new spending? Illinois needs $ 19 billion more to cover new spending in Pritzker’s budget, which includes “funding a capital plan, investing in K-12 and higher education and pursuing projects in his 2020 budget.”

Illinois cannot spend its way into prosperity. The government has to roll back its spending, balance its budget, and reduce taxes in order to keep businesses in the state.

*CORRECTION: An earlier version of this article mischarachterized Illinois Policy.