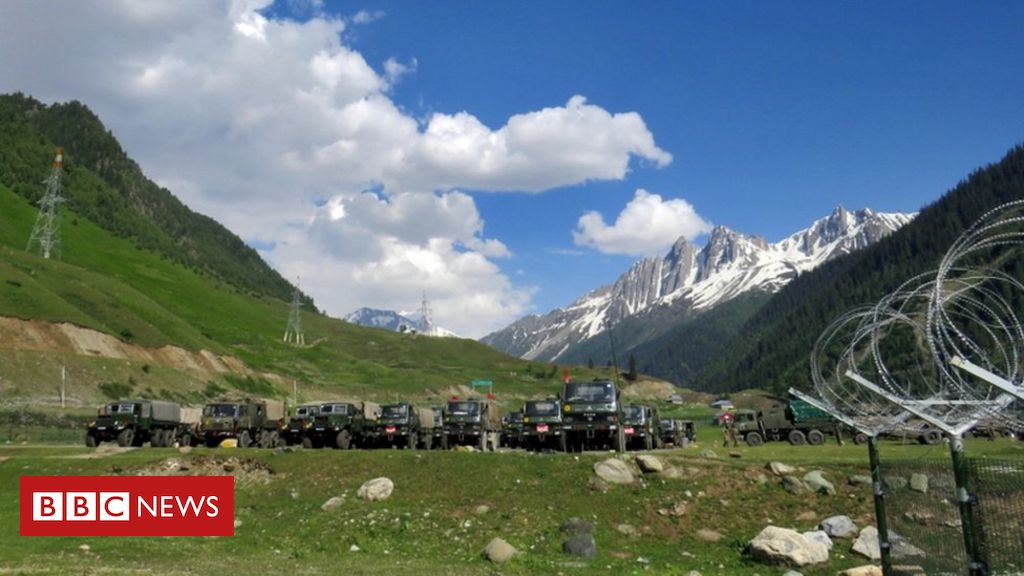 India’s prime minister has said the deaths of at least 20 soldiers in a fight with Chinese troops in a disputed Himalayan border area “will not be in vain”.

Narendra Modi said India would be “proud that our soldiers died fighting the Chinese” in the clash in the Ladakh region on Monday.

Soldiers reportedly brawled with sticks, bats and bamboo sticks studded with nails. No shots were fired.

Both sides blamed each other.

It is the first deadly clash between the two sides in the border area, in the disputed Kashmir region, in at least 45 years. Some Indian soldiers are still believed to be missing.

India’s army said China also suffered casualties but Beijing has given no details.

The Indian statement notes that injured soldiers were “exposed to sub-zero temperatures in the high altitude terrain”.

The fighting occurred in the precipitous, rocky terrain of the strategically important Galwan Valley, which lies between China’s Tibet and India’s Ladakh.

Indian media say soldiers engaged in direct hand-to-hand combat, with some “beaten to death”. During the fight, one newspaper reported, others fell or were pushed into a river.

The Indian army initially said a colonel and two soldiers had died. It later said that “17 Indian troops who were critically injured in the line of duty” and died from their injuries, taking the “total that were killed in action to 20”.

“I understand that some [further] Indian soldiers went missing. The Indian side is still working to release them from the Chinese custody,” defence analyst Ajai Shukla told the BBC.

Indian forces appear to have been massively outnumbered by Chinese troops.

A senior Indian military official told the BBC there were 55 Indians versus 300 Chinese, who he described as “the Death Squad”.

“They hit our boys on the head with metal batons wrapped in barbed wire. Our boys fought with bare hands,” the officer, who did not want to be named, said.

His account, which could not be verified, tallies with other reports in the Indian media detailing the savagery of the combat.

The clash has provoked protests in India, with people burning Chinese flags.

Addressing the confrontation for the first time in a televised address on Wednesday, Prime Minister Modi said: “India wants peace but when provoked, India is capable of giving a fitting reply, be it any kind of situation.

“The country will be proud that our soldiers died fighting the Chinese.”

He said he wanted to “assure the nation” the loss of the soldiers would “not be in vain”. “For us, the unity and sovereignty of the country is the most important,” he added.

China has accused India of crossing the border onto the Chinese side. Its foreign ministry said on Wednesday it wanted to avoid further clashes but gave no further details.

It has not confirmed how many of its personnel died or were injured. The BBC’s Robin Brant in Beijing says that China has never given contemporaneous confirmation on military deaths outside of peacekeeping duties.

Our correspondent adds that on this occasion China’s propagandists may not want to fan nationalist flames at home by making much of any loss, or admit to a significant and demoralising loss.

This is not the first time the two nuclear-armed neighbours have fought without conventional firearms on the border. India and China have a history of face-offs and overlapping territorial claims along the more than 3,440km (2,100 mile), poorly drawn Line of Actual Control (LAC) separating the two sides.

The first comments from the Indian government on the violent standoff on the Chinese border came nearly 24 hours after the news broke on Tuesday.

And Prime Minister Narendra Modi and his cabinet colleagues – the defence minister and the home minister – have chosen their words carefully.

Usually boastful and given to grandstanding, Mr Modi and his ministers have displayed utmost restraint in their public messages this time, mostly sticking to mourning the loss of soldiers.

The prime minister did say: “India wants peace but, if instigated, it is capable of giving a befitting reply.” But this is seen as aimed more at his political rivals and supporters domestically, rather than as a warning to Beijing.

China is not Pakistan and memories of the humiliating defeat in the 1962 war are all too real for any misadventure.

How tense is the area?

The LAC is poorly demarcated. The presence of rivers, lakes and snowcaps means the line can shift. The soldiers either side – representing two of the world’s largest armies – come face-to-face at many points.

Border patrols have often bumped into each other, resulting in occasional scuffles.

The last firing on the border happened in 1975 when four Indian soldiers were killed in a remote pass in the north-eastern state of Arunachal Pradesh. The clash was variously described by former diplomats as an ambush and an accident.

But no bullets have been fired since.

At the root of this is a 1996 bilateral agreement that says “neither side shall open fire… conduct blast operations or hunt with guns or explosives within two kilometres of the Line of Actual Control”.

But there have been tense confrontations along the border in recent weeks. In May Indian and Chinese soldiers exchanged physical blows on the border at Pangong Lake, also in Ladakh, and in the north-eastern Indian state of Sikkim.

India has accused China of sending thousands of troops into Ladakh’s Galwan Valley and says China occupies 38,000 sq km (14,700 sq miles) of its territory. Several rounds of talks in the last three decades have failed to resolve the boundary disputes.

The two countries have fought only one war so far, in 1962, when India suffered a humiliating defeat.

There are several reasons why tensions are rising again now – but competing strategic goals lie at the root.

The two countries have devoted extensive money and manpower to building roads, bridges, rail links and air fields along the disputed border.

Both India and China see each other’s construction efforts as calculated moves to gain a tactical advantage, and tensions often flare up when either announces a major project.

Following the latest clash between China and India, the United Nations urged both sides “to exercise maximum restraint”.

“We take positive note of reports that the two countries have engaged to de-escalate the situation,” UN associate spokesperson Eri Kaneko said.