Typically, ad campaigns have the goal of getting people to do something. But the one launched today by the activist…

Typically, ad campaigns have the goal of getting people to do something. But the one launched today by the activist group Citizens Against Monopoly is instead intended to show how hard something is to do.

The campaign, I’m Not Your Product, gives Facebook users a step-by-step guide to opting out of as much ad targeting and surveillance as possible. Facebook CEO Mark Zuckerberg told Congress that users have “complete control” over advertising data during two days of testimony related to the political consultancy Cambridge Analytica, which illicitly obtained information on 87 million of Zuckerberg’s users.

But Citizens Against Monopoly discovered that Facebook makes it difficult to exert that sort of control. The steps for opting out of ad targeting are almost endless: visiting eleven different areas of Facebook’s user preferences section, clearing out three different caches of personal interests, disallowing four different types of ads, and limiting seven different actions on the site to friends only. And even all this doesn’t completely turn off ads.

“We wanted to create a how-to guide to be helpful, and then as we were working through it we thought, this is so frustrating,” said Sarah Miller, director of advocacy for the Open Markets Institute, the umbrella organization for Citizens Against Monopoly. “We think people will have the same experience seeing how intentionally hard this is.”

“We want to show that these platforms are operating in bad faith.”

The likely reason for the friction around opting out is obvious: Facebook thrives off mass data collection, essentially renting people’s private information out to advertisers. The more users opt out, the less profitable Facebook becomes — a financial incentive at odds with the social network’s self-presentation as a safe, private, customizable space.

Facebook acknowledged after the Cambridge Analytica scandal that its privacy settings were too hard to locate on the site. A spokesperson referred The Intercept to several features which are being updated on a rolling basis. In March, Facebook redesigned privacy settings for mobile, consolidating 20 different pages into one screen, and built a shortcuts menu that is “clearer, more visual, and easy to find.” Last week, Facebook announced a “Clear History” initiative to let users remove activities performed on other websites and apps from their account. That initiative is in the concept stage and has yet to be rolled out.

But Citizens Against Monopoly believes that these steps were more half-measures. In addition to their how-to guide, which will be promoted through display ads across the Web, including on Facebook, the website ImNotYourProduct.com includes a petition to Zuckerberg asking him to distill Facebook’s various opt-out steps down to a single click. Since making it easy for users to opt out of ad targeting would be at odds with Facebook’s business model, there’s little expectation that Facebook will comply with this request. The real goal is to display the futility of self-regulation for Facebook’s surveillance machine.

“We want to show that these platforms are operating in bad faith, so we can reform and restructure them to make them safe for democracy,” said Matt Stoller, a fellow with the Open Markets Institute. 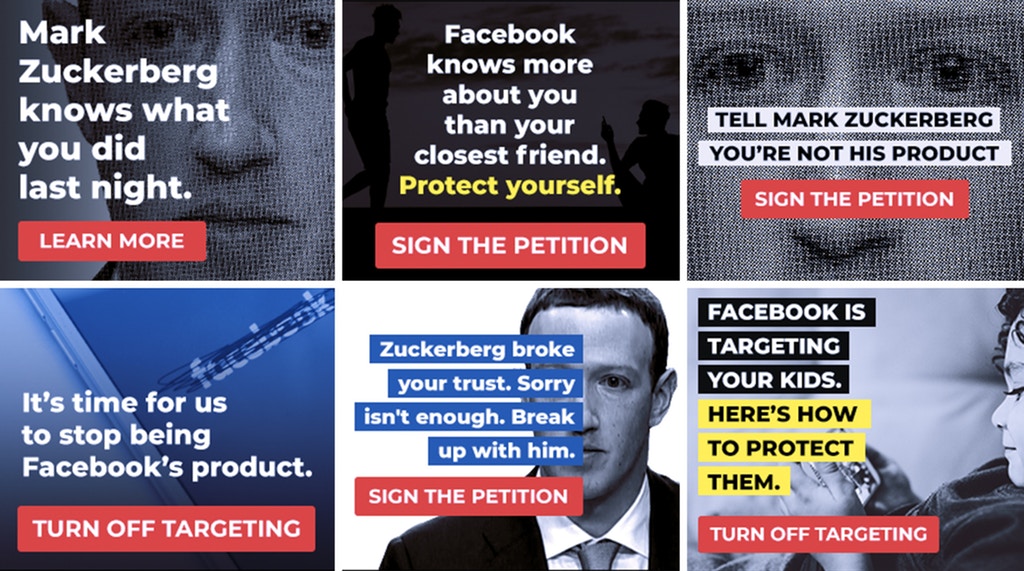 Images: Courtesy of Citizens Against Monopoly

Facebook has numerous targeting methods, not only within the site but across the Web, through mobile phones, and from outside data sets pulled from third parties. By building meticulous profiles of users, Facebook can deliver any subset of any group to an advertiser, whether the advertiser is a corporation, a drug pusher, a political movement, or a con artist. The ubiquity and precision of this surveillance operation creates vulnerabilities for anyone who uses Facebook, or even those that don’t but have their data captured elsewhere on the Web.

Non-users are out of luck for opting out of targeting. But even a Facebook user has trouble preventing the site from tracking their every move, because it makes the privacy controls deliberately burdensome to modify.

Citizens Against Monopoly’s how-to guide begins by recommending the installation of the FB Purity browser extension, which gives users additional options to filter and customize Facebook. Then it directs users to Facebook’s ad preferences page. FB Purity allows users to more easily prevent advertisers from targeting based on several types of data: interests, relationship status, employer, job title, and education level. Users can also remove advertisers they interact with, disallow ads based on data from partners and based on social actions (such as liking a page), and prevent ads from being shown elsewhere on the Web based on Facebook activity. Just changing these ad preferences requires nine separate steps, none of which are particularly obvious.

Next, users must navigate to Facebook’s privacy settings, manually restricting who can view past or future posts, who can send friend requests, who can see friends lists, who can see pages followed, and who can search under user-provided email addresses or phone numbers. At this page, users can also restrict outside search engines from linking to their Facebook profile. Finally, there’s a reminder to not use Facebook to log in to other websites, as data gleaned there will be scraped and made available to Facebook.

None of these changes definitively turn off targeted ads; Facebook can still make available to advertisers some data not covered here. And all of the settings rely on Facebook actually honoring the requests to opt out. But the fact that it’s such a time-consuming pain to set up Facebook for minimal surveillance is in many ways the point.

The burden is at odds with the TV advertising campaign Facebook rolled out recently, in reaction to the Cambridge Analytica scandal. “That’s going to change. From now on, Facebook will do more to keep you safe and protect your privacy so we can all get back to what made Facebook good in the first place,” says the narrator in the ad. But the site creates intentional hurdles for users to take the initiative and protect their own data.

“Facebook claims to be really sorry about these bad actors manipulating their platform,” said Sarah Miller. “But Facebook isn’t going to want to make it easier to opt out. That would fundamentally affect their business model.”

The Open Markets Institute has a series of ideas for restructuring Facebook, including unwinding their mergers with Instagram and WhatsApp, spinning off the company’s ad network, and requiring interoperability standards that allow competing social media networks to access their friend networks. The I’m Not Your Product campaign essentially acts as a proof of concept for how Facebook cannot, by definition, reform itself.

Facebook is reportedly test-marketing an ad-free, $ 1/month subscription-based model. They’ve made no announcement on whether they’ll follow through with that option. Facebook COO Sheryl Sandberg has previously said that fully opting out of targeted ads “would be a paid product.”

But government could also play the role of safeguarding user privacy and forcing Facebook to contemplate models other than mass surveillance. “Facebook is operating in the legal context we’ve given them,” said the Open Markets Institute’s Matt Stoller. “The only way to fix it is to regain democracy.”

Top photo: A display area is seen during Facebook’s annual F8 summit at the San Jose McEnery Convention Center in San Jose, Calif. on May 1, 2018.

As Coronavirus Spreads in Federal Prisons, Cases in Halfway Houses Are Being Undercounted

Don’t Be Fooled: The 2020 Election Has Already Been Decided