Jeremy Renner‘s ex-wife seems to be trying to show why she should get sole custody of their daughter as the court battle wages on … opting for a day in the hay as exhibit A.

Sonni Pacheco was seen Saturday with her and Jeremy’s 6-year-old daughter, Ava, at a pumpkin patch in L.A., where it was just mom and the kid enjoying themselves. In photos and video we got of their outing, you can see Ava having a great time.

She goes up and down an inflatable slide a few times while Sonni looks on, and certainly seemed down with the festive scenery all around her as she held hands with her ma.

It even looks like there might’ve been some other parents there with their own kids tagging along, as Sonni was seen mingling with a woman and a guy in a black shirt. Safe to say, it was a cozy looking scene — the opposite of what’s been going on behind closed doors. 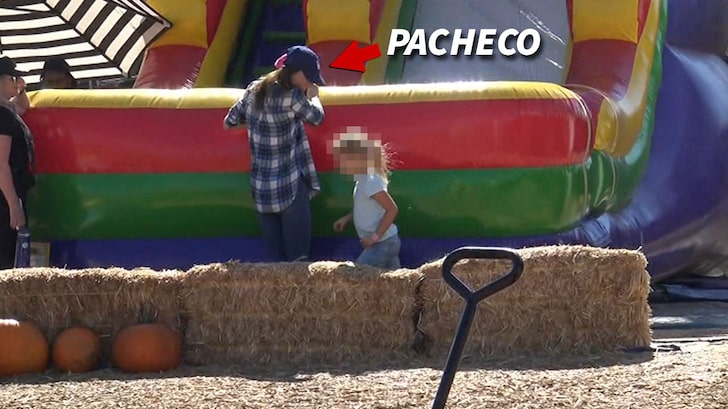 As we’ve reported … Jeremy and Sonni are locked in a bitter custody battle right now, with allegations being hurled against each other left and right. Sonni has said that Jeremy is a substance-abusing loose canon who threatened to kill her as well as himself.

He denied that, and claimed she was the one with substance abuse issues … not to mention being sex obsessed and introducing that type of content to their kid. He’s also called her mentally unstable and a liar, who’s only attempting to smear him for revenge.

Both parents are out for sole custody, and with this … it looks like Sonni’s the first to strike with a good photo-op. Time will tell if it helps her cause.