Love was definitely not in the air when Theresa May met Vladimir Putin in Osaka for the G20 summit. The… 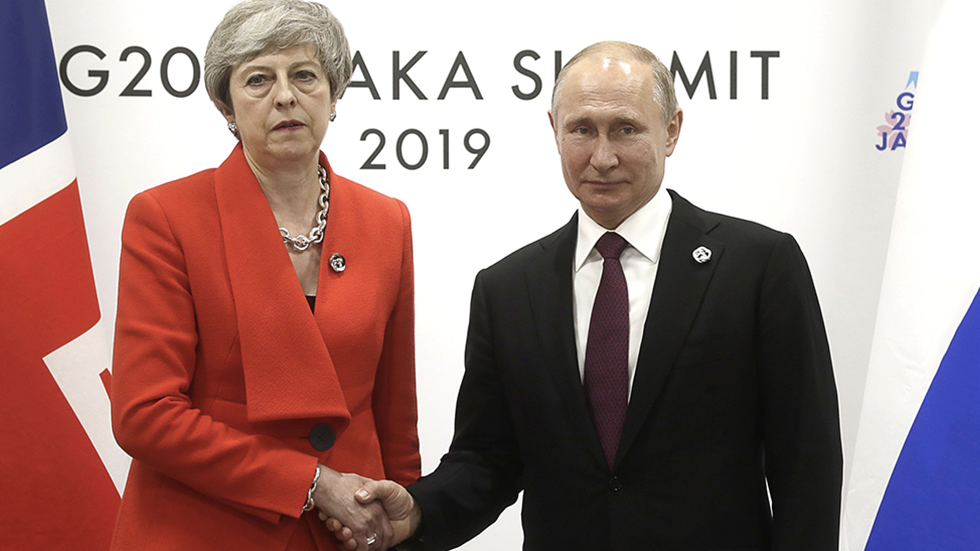 Love was definitely not in the air when Theresa May met Vladimir Putin in Osaka for the G20 summit. The British prime minister posed for a frosty handshake with the Russian president as if she was at a “divorce hearing.”

It was never going to be the prelude to ‘old friends’ catching up with warm-hearted stories over English breakfast tea, but May’s glum look illustrated perfectly how she really felt about the Russian president.

A stone-faced Theresa May meets Vladimir Putin at the G20 summit in Japan.

She’s expected to call for the Salisbury Novichok suspects to be ‘brought to justice’. pic.twitter.com/MRn55elTyM

Many on social media have found the grumpy images of May highly amusing with one describing her demeanor as being “like a divorce hearing.” Others insisted that the prime minister was in fact doing her “smiling” pose and posted gifs illustrating what actually might have been going on in her head during the handshake.

It’s a stark contrast to the 2016 G20 meeting in Hangzhou, China between the two world leaders, which saw May dressed again in all red, but giving the cameras a beaming smile.

A senior British official has said that the meeting between May and Putin lasted one hour and 20 minutes and was “serious in tone.” The pre-meeting handshake may have given that away to be fair.

According to the official, for the first 40 minutes, when May raised the Salisbury case, she was alone with the Russian president apart from their interpreters.

The two nations have experienced an increasingly strained relationship since former spy Sergei Skripal and his daughter were ‘poisoned by a nerve agent,’ so-called Novichok, in Salisbury, south-west England in March 2018.