Massachusetts Rep. Jim McGovern, the leading Democrat on the powerful House Rules Committee, on Tuesday introduced a bill that threatens…

Massachusetts Rep. Jim McGovern, the leading Democrat on the powerful House Rules Committee, on Tuesday introduced a bill that threatens to sever the decades-old security relationship between the United States and Saudi Arabia. The bill, which is co-sponsored by six Democrats and two Republicans, is the latest outraged response from lawmakers on Capitol Hill to the disappearance and suspected murder of prominent Saudi journalist Jamal Khashoggi.

Specifically, McGovern’s bill would ban all arms sales and military cooperation with Saudi Arabia, unless the secretary of state certifies that the Saudi government and its agents “did not order or direct” Khashoggi’s disappearance or killing. It would also suspend the security relationship between the two countries, except to protect or evacuate U.S. citizens and diplomatic personnel in the kingdom. The bill would also require a detailed report from the secretary of state about Khashoggi’s status.

“If the United States stands for anything, we need to stand out loud and foursquare for human rights,” McGovern said in a Friday statement announcing his intent to introduce the legislation. “Our values are our strength, and we cannot be indifferent or complicit when those values are undermined or attacked.”

Khashoggi, a prominent critic of Saudi Crown Prince Mohammed bin Salman, was last seen October 2, entering the Saudi Consulate in Istanbul for documents he needed in order to get married. Since then, a steady stream of sometimes conflicting leaks from Turkish officials has led to the widespread belief that Khashoggi, who lived in self-imposed exile in Virginia, was assassinated and dismembered by the Saudis. The Saudi government has vehemently denied these accusations, but it has not presented a credible explanation for Khashoggi’s disappearance. 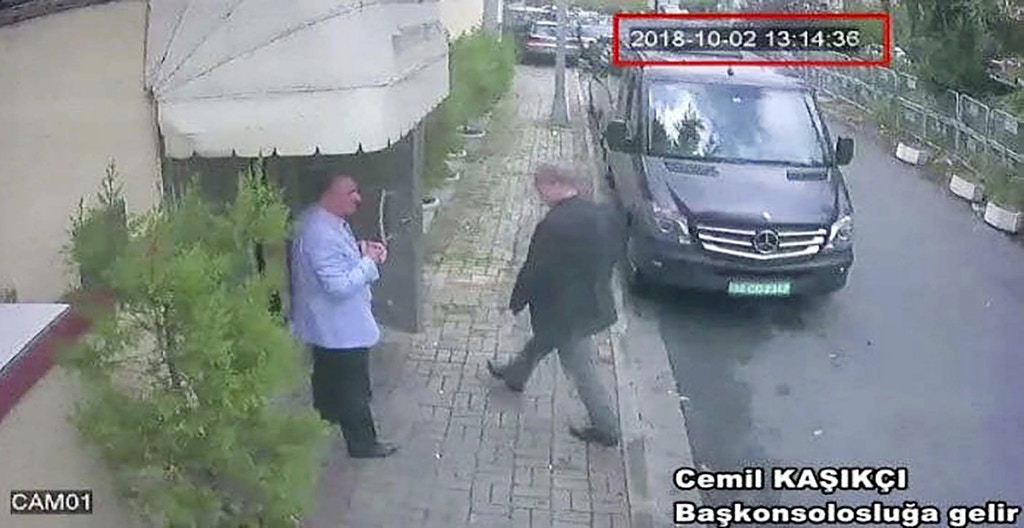 This image, taken from closed-circuit TV footage obtained by the Turkish newspaper Hürriyet and made available on Oct. 9, 2018, appears to show Saudi journalist Jamal Khashoggi entering the Saudi Consulate in Istanbul on Oct. 2, 2018.

President Donald Trump, meanwhile, defended the U.S.-Saudi relationship this weekend, saying he didn’t want to endanger future arms sales over allegations that Saudi agents killed a Washington Post columnist. On Tuesday, Secretary of State Mike Pompeo met with Saudi King Salman in Riyadh regarding Khashoggi’s disappearance, but the response from the Trump administration has been relatively muted. On Capitol Hill, however, the kingdom’s relationship with Congress is in free fall.

“I’m hearing, on both sides of the aisle, a questioning of the Saudi relationship, more so after the Khashoggi incident than after 9/11,” said Rep. Ro Khanna, a Democrat from California who has been highly critical of the Saudi war in Yemen. “It’s the final straw that has broken the U.S.-Saudi relationship.”

Last week, 11 Democratic and 11 Republican senators sent Trump a letter invoking the Global Magnitsky Act, a 2016 law that requires the president to make a determination about whether to sanction human rights violators. All but one member of the Senate Foreign Relations Committee signed the letter, which directs Trump not to spare “the highest ranking officials in the Government of Saudi Arabia.” (Sen. Rand Paul, R-Ky., was the sole committee member who did not sign the letter; he has, however, indicated that he’ll be pushing to stop U.S. arms sales to Saudi Arabia.)

In an interview with “Fox and Friends” on Tuesday morning, Republican Sen. Lindsey Graham — one of the signatories of the letter, and historically one of the kingdom’s strongest defenders in Washington — called for the crown prince’s removal and said he would “sanction the hell out of Saudi Arabia.”

“I can never do business with Saudi Arabia again, until we get this behind us,” Graham said.

Saudi Arabia is the United States’s oldest ally in the Middle East, and sanctions against its king or crown prince would be unprecedented.

In addition to demands to penalize Saudi Arabia, members of Congress are also demanding answers about what the U.S. knew about the plot beforehand.

The Washington Post reported last week that U.S. intelligence agencies had intercepted communications indicating that the crown prince ordered Khashoggi’s arrest, but it was unclear if Khashoggi was warned ahead of time. Sen. Bob Corker, the Republican chair of the Senate Foreign Relations Committee, later told CNN that “intel points directly” at the Saudis, and that he believes Khashoggi was murdered.

“Considering the profound ramifications of this potential crime, U.S. foreknowledge of Saudi plans to detain Mr. Khashoggi, and whether the U.S. intelligence community carried out its duty to warn, we intend to use the full force of Congressional oversight and investigatory powers to obtain these answers should they not be forthcoming,” the letter reads.

Khanna and Pocan, both members of the Congressional Progressive Caucus, are still collecting signatures, and they plan to send the letter later this week, according to a Democratic aide.

Traditionally, the intelligence community has a “duty to warn” people when they detect impending plots to their security, and it is unclear whether Khashoggi was told of any plot to detain him.

Despite reports about the intelligence community’s foreknowledge, Trump has expressed uncertainty about whether the Saudis were responsible. Following a 20-minute phone call with the Saudi king on Monday, Trump told reporters that the king’s denials were made “very strongly.” He added,“It sounded to me like maybe these could have been rogue killers. Who knows.” 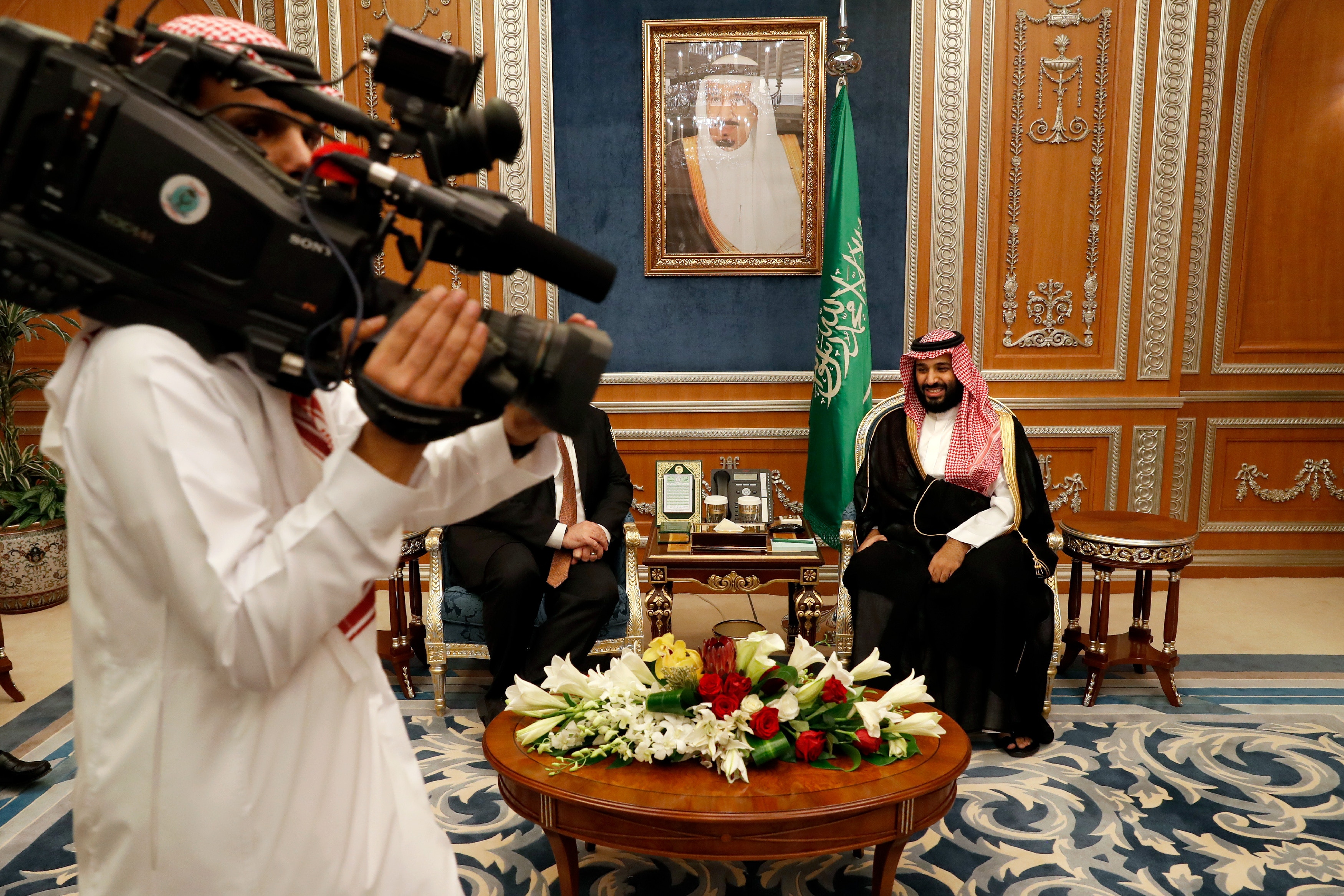 A cameraperson gets into position as U.S. Secretary of State Mike Pompeo, obscured at left, meets with Saudi Crown Prince Mohammed bin Salman in Riyadh, Saudi Arabia, on Oct. 16, 2018.

The alleged murder of Khashoggi would be the latest in a series of aggressive and interventionist moves by Crown Prince Mohammed, the 33-year-old de facto ruler of Saudi Arabia. In June 2017, he leapfrogged his elder cousin to become next in the line for the throne.

Commonly billed as a “reformer” who has allowed women to drive and opened movie theaters, the crown prince’s tenure has also been marked by an intensive crackdown on critics and an overtly interventionist foreign policy.

Crown Prince Mohammed is the architect of Saudi Arabia’s three-year intervention in Yemen, which has killed tens of thousands of people and led to mass starvation throughout the country. Under the crown prince, Saudi Arabia has maintained a trade embargo on Qatar, and last November, he scooped up billions of dollars in assets by arresting his family members as part of an “anti-corruption” crackdown. That same month, the Saudi government detained Lebanese Prime Minister Saad Hariri and forced him to read a prewritten resignation speech on Saudi state television. (Hariri eventually returned to Lebanon and rescinded his resignation.)

On Capitol Hill, Khashoggi’s disappearance could catalyze frustration with the crown prince’s U.S.-backed intervention in Yemen, which the Trump and Obama administrations have supported with arms sales and logistical aid.

Last year, citing human rights concerns over the war in Yemen, the Senate nearly blocked an arms sale to Saudi Arabia in a 47-53 vote. Currently, Sen. Bob Menendez, the most powerful Democrat on the Foreign Relations committee, is holding up a $ 2 billion weapons sale to Saudi Arabia and the United Arab Emirates for the same reason.

In the House, leading Democrats have joined a resolution that would direct the Trump administration to withdraw all U.S. forces who are participating in the war. Khanna said that in the wake of Khashoggi’s disappearance, he thought it was likely to pass.

“I think that the relationship has been permanently damaged,” he told The Intercept by phone. “I don’t think it will ever recover.”

Top photo: Saudi journalist Jamal Khashoggi speaks on his cellphone at the World Economic Forum in Davos, Switzerland, on Jan. 29, 2011.

Safety is the watchword: UK regulator says there is ‘no chance’ it will compromise on Covid-19 vaccine