Factory farming interests, facing potential legal risks for allegedly failing to protect workers from coronavirus-related risks, are among the many… 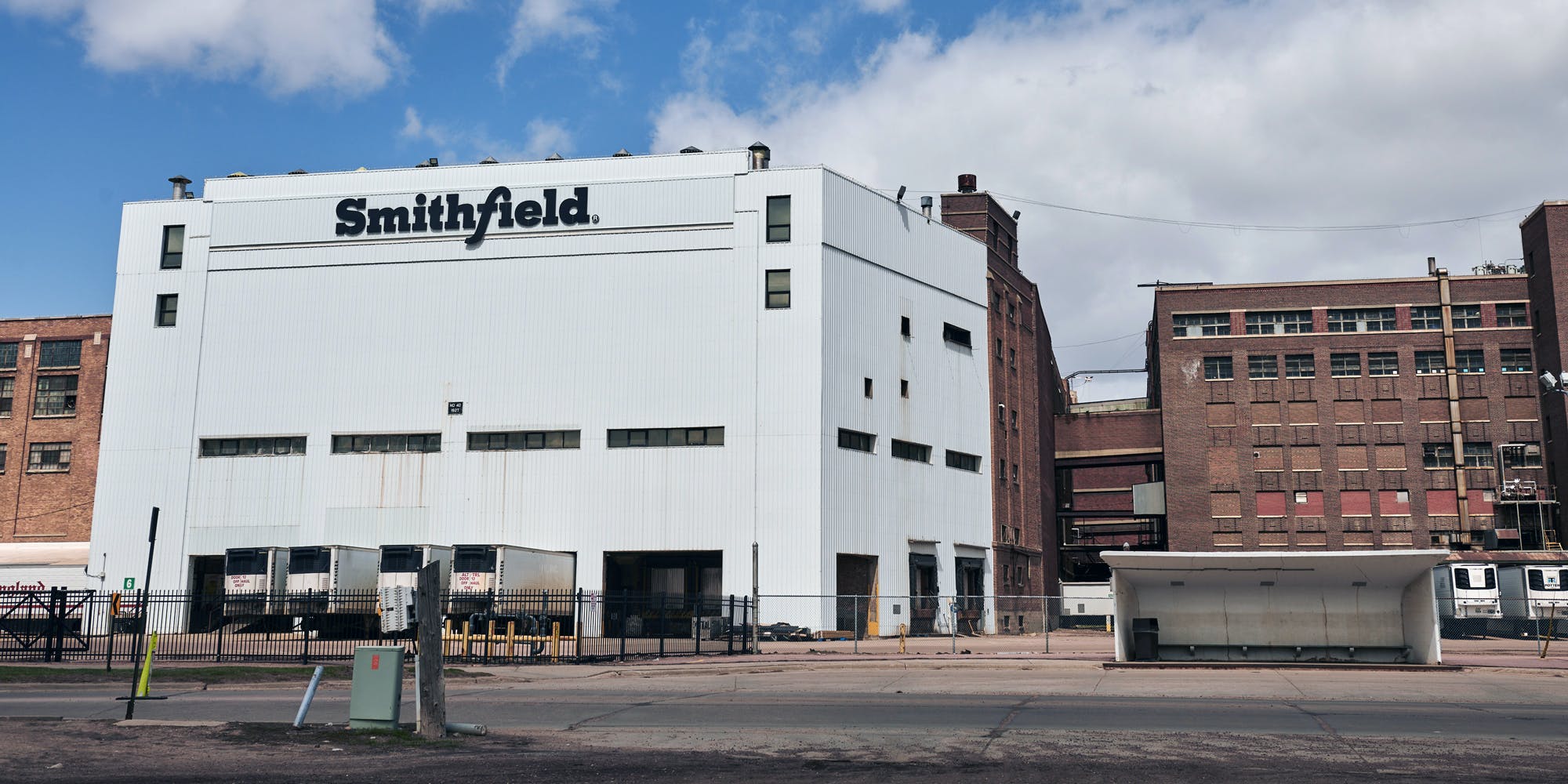 In April, as meat supply chains came under enormous pressure to continue producing food during the pandemic, factory farms became some of the first hot spots for the rampant spread of the coronavirus. Nearly 100 workers at a variety of meat-processing plants across the country have died of Covid-19 and several thousand have been infected across the industry, a crisis that has spurred lawsuits alleging that the meat industry has failed to protect workers.

The legal threat could be undone by new liability waiver laws, a legislative priority for Republicans in both the House and Senate that has received political support from the industry and influential think tanks.

Smithfield Foods, the world’s largest pork processor, and Mountaire Farms, a major poultry producer, have come under fire in recent months for reportedly pressuring employees to crowd into plants with minimal safety precautions.

Smithfield Foods has cut campaign checks to the Republican attorneys general seeking civil liability protections for businesses that remained open during the pandemic, and has dispatched company lobbyists to press lawmakers on the issue.

Smithfield Foods, which donates small amounts to dozens of lawmakers on a regular basis, made its first significant donation to the Republican Attorneys General Association in over six years two months ago. The company made a $ 25,000 donation to  RAGA just three days before members of the association sent a letter to Congress demanding broad business immunity from civil claims holding companies responsible for coronavirus infections due to working conditions. Later that month, after the letter was sent, Smithfield Foods followed up with another $ 25,000 contribution to RAGA.

“The COVID-19 pandemic is likely to create a surge in civil litigation targeting well-intentioned businesses for taking pandemic mitigation measures,” the letter, led by Georgia Attorney General Chris Carr, warned. The letter noted that 23 states have signed liability limits over the coronavirus, and urged Congress to swiftly enact a federal waiver.

The American Farm Bureau Federation, which represents a range of animal agriculture interests, has also pushed Congress to include liability waivers in the next round of legislative relief for the current crisis.

Mountaire Farms and Smithfield Foods did not respond to a request for comment.

The centralized nature of the factory farm industry, with massive plants employing workers often huddled shoulder to shoulder, deboning chickens, or packaging beef, along with meager paid sick leave and the declining rates of federal safety inspectors, made the industry an early focal point of the crisis.

Several major meat companies coerced sick employees to continue working with promises of bonuses, and in many plants workers claimed that they faced hostility when requesting hygiene equipment such as face masks.

In one Texas plant owned by JBS, a Brazil-based meat conglomerate, workers were enticed to continue working through the pandemic with the promise of a free Angus rib-eye, which retails at nearly half a day’s wages. The industry’s immigrant-heavy workforce cited fear of retribution for speaking out on the dangerous conditions.

Smithfield Foods has faced at least one federal lawsuit over its handling of the crisis. The Rural Community Workers Alliance, a group that organizes meatpacking workers in rural Missouri, claimed that the company violated Centers for Disease Control and Prevention guidelines at its Milan, Missouri plant. Employees at the plant, the complaint charged, were crowded into close proximity with insufficient safety equipment. The lawsuit, however, was dismissed, partially on jurisdictional grounds.

“We are pleased with the decision of the United States District Court for the Western District of Missouri to dismiss the complaint made against our company,” the company said in a statement. “From the start, we stated that this lawsuit was frivolous, full of specious allegations that were without factual or legal merit and that the assertions were based on speculation, hearsay, anonymous declarations and outdated information.”

In South Dakota, Smithfield Foods asked a federal judge to block federal regulators from obtaining Covid-19 outbreak data in the state. “Smithfield’s employees have legitimate privacy interests in this information, and Smithfield and DOH [South Dakota Department of Health] are legally obligated to protect it,” the company’s attorneys claimed.

Mountaire Farms has also faced claims that the company has placed workers in harm’s way. A recent investigation in the New Yorker charged that the company concealed the rate of infection at its chicken-processing plants in North Carolina.

The United Food & Commercial Workers, a labor union representing Mountaire Farms workers, filed a federal claim in May charging that the company coerced employees at a Delaware plant to attend anti-union in-person meetings during the pandemic in violation of CDC guidelines.

JBS, Tyson Foods, and other meat industry giants are facing wrongful death lawsuits over claims that the firms engaged in gross negligence over protecting workers from coronavirus.

It’s not just animal agriculture interests that have faced legal liability over the pandemic. The unprecedented crisis has rippled through the economy, raising questions over whether a range of businesses may face serious legal judgments over how they may have exposed workers and customers to the virus.

Many firms of all stripes have expressed concern that a tidal wave of lawsuits over coronavirus risk could bog down any hope of a recovery, and that plaintiff attorneys are attempting to exploit the crisis. Labor activists and consumer rights advocates counter that companies have ignored procedures that could have saved lives.

The Virginia-based law firm Hunton Andrews Kurth, which serves as counsel to Smithfield Foods for the company’s coronavirus-related cases, has compiled 3,649 overall coronavirus-related legal claims across a variety of issues and industries as of July 21. Against this backdrop of legal liability, over 200 industry associations have petitioned for special legal immunity for coronavirus-related suits.

Influential industry-backed think tanks, such as the American Enterprise Institute and the Heritage Foundation, have demanded civil lawsuit immunity as part of any coronavirus legislative fix. The American Legislative Exchange Council, a business-friendly nonprofit that produces “model” legislation to help shape state policy, released template legislation on Monday that calls for civil liability immunity for actions arising out of a national emergency or disaster.

Minority Leader Kevin McCarthy, R-Calif., has also demanded that the next phase of economic relief contain civil liability immunity. The Congressional Leadership Fund, a Super PAC associated with McCarthy’s aides, notably received $ 250,000 from Mountaire Farms’ Cameron in May. (Cameron is a routine donor to GOP causes and is one of the largest donors in recent cycles to Trump and congressional Republican Super PACs.)

Federal records show that Smithfield Foods contracts with Holland & Knight, a national law firm, to lobby on the issue in Congress. The same firm also operates on behalf of Smithfield Foods in North Carolina, a state that passed a partial liability limit in June. The law, signed by Gov. Roy Cooper, D-N.C., grants individuals and business liability from claims relating to contraction of the coronavirus, except in cases of gross negligence or intentional wrongdoing.

Lobbying records in Iowa show a range of business interests involved in supporting passage of the bill, including Koch Industries, Iowa Restaurant Association, AT&T, and the Iowa Grocery Industry Association. Smithfield Foods dispatched at least one lobbyist in Des Moines to press officials to pass the legislation.

Candidates, Your Views on the Middle East? You Have 30 Seconds.

During the Trump Era, Everyone and Everything in America Failed

Jon Ossoff Is Back: “I’m Still Standing and I’m Ready to Fight”