BOSTON, MA – A sharp decline in the chastity belt industry is being blamed on millennials. According to a recent… 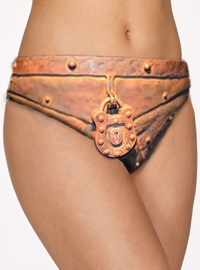 BOSTON, MA – A sharp decline in the chastity belt industry is being blamed on millennials.

According to a recent article in Chastity Belt Monthly Magazine, millennials are not buying or wearing chastity belts, causing a significant sales decline in the industry.

“(Millennial’s views on chastity belts) is quite distressing,” said Chastity Belt Monthly Editor-In-Chief, Morgan Tyler. “Kids these days, they don’t know what it means to be chaste. They run around with their boobies flapping all over the place. It’s quite disgusting. I mean, the gift of one’s naughty bits is not something that should be taken lightly. Yet here these kids are, thrusting them in our faces without a locking device attached.”

While sales of chastity belts have been slowing over the last several hundred years, chastity belt insiders say that millennials only account for .001% of total chastity belt sales annually.

“For the longest time, we were able to keep chastity belt markets strong by catering to the S & M crowd in addition to the very religious crowd,” said Lock’d Her Up production manager, Kent Yerlly. “But then people started thinking of chastity belt enthusiasts as weirdos. I mean I wear one, does that make me a weirdo? No. I also like to be spanked with a rubber spatula while I hum Nickleback tunes and try to make hollandaise sauce. Does that make me a weirdo? No. It’s just something that happens. But these kids, I don’t know. They’re just weird for not wanting their junk under lock and key.”

Millennials, even those that are willing to wait until they are married to have sex, find chastity belts unnecessary and in some cases “ugly and awkward.”

“Oh my god! Like… have you even seen those things? Like… I can’t even. Literally,” said millennial Dakota Cummings. “I literally like… know like no one that even has one. Totes. And like… literally. You know? But seriously. What the fuck? Those things are horrible torture devices designed by men to keep women as objects and property of men. Like… literally. ”

“We’ve been toying with a couple different design ideas and focus grouping them with some millennials,” said CastiShe Lead Product Designer Frank Vermilli. “We used some pink leather on some. Added some sparkly things. One of the designs that has received some positive feedback is a chastity belt that actually has a whole in it that will allow for the wearer to have sex. I know that kind of goes against the whole idea of the chastity belt but we are barely hanging on here man. At this point we are willing to sell chastity belts made out of paper. Hey, that might not be a bad idea. We also came up with one that had a fidget spinner on it. Are those things still popular?”

The chastity belt industry is not the only area millennials are impacting. To date millennials have been responsible, at least in part, for the shrinking sales of sun dials, Microsoft Zunes, Rollerblades and for destruction of the idea of marriage.