Jenna Edwards runs the For a Day Foundation, a nonprofit that helps children with cancer during their hospital stays and…

Jenna Edwards runs the For a Day Foundation, a nonprofit that helps children with cancer during their hospital stays and has no actual office. So she assumed that getting a loan forgiven from the Paycheck Protection Program to cover two months of payroll would be “pretty automatic,” she said. Congress created the PPP, to be overseen by the U.S. Small Business Administration, last March to cover payroll and other expenses in the coronavirus pandemic with the promise that loans would be forgiven, essentially converted to grants.

She was wrong. In September, she submitted a completed one-page application for forgiveness to her account with PayPal LoanBuilder and was told it would be reviewed within 60 days. At first she got emails regularly saying it was under review with contact information for her loan specialist, but then those stopped coming. In mid-January, she logged into her account and saw she had been assigned a different loan specialist and emailed him but never got a response. When she contacted the first specialist, he told her he had been reassigned to processing applications for the new round of PPP money.

Edwards became desperate. She kept leaving her new specialist emails and voicemails but received no response. She called PayPal’s hotline and got nowhere. She even called her local SBA office to complain but was told there was nothing they could do. When she did get through to someone at PayPal, the new person said they’d handle Edwards’s account and then never got in touch; a month later, Edwards saw in her account that she’d been assigned to a fourth loan specialist. This specialist responded to her entreaties by telling her to upload tax documents that don’t apply to incorporated nonprofits. Now she’s been told that her forgiveness application is on hold until the SBA releases a new, easier form for small-dollar loans sometime this month.

“I have spent two months of my working time trying to get this forgiven,” Edwards said. The PPP money “is supposed to free up my energies to do my business,” she added. But “it’s just kind of hard to take on more things when that’s taking up the mental and emotional space.” 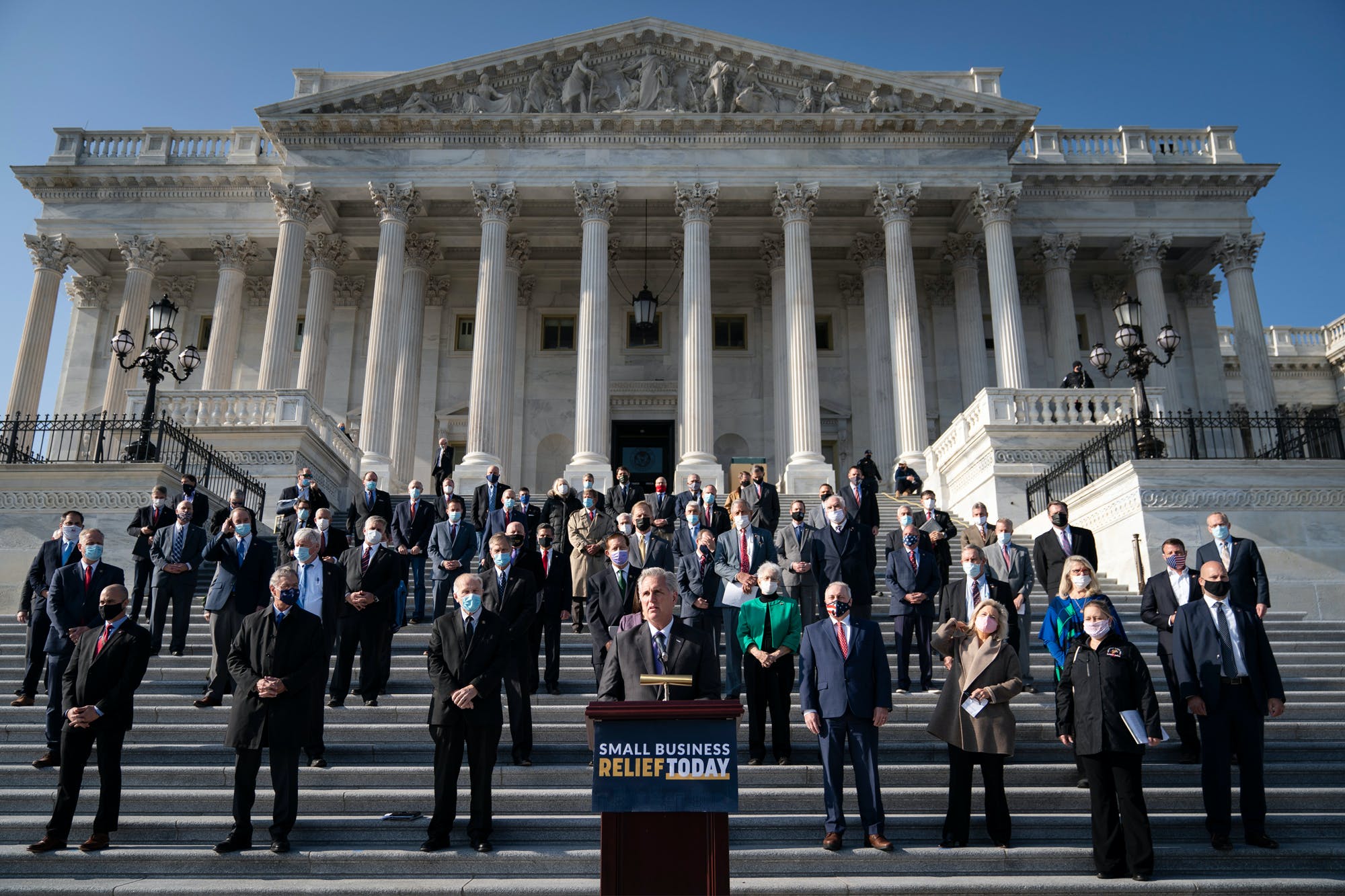 According to a recent survey of 1,093 small business owners by payroll services company Gusto, 56 percent of those that got PPP loans haven’t had them forgiven yet. Over 60 percent say it’s because they haven’t applied yet — often because their bank hasn’t allowed them to start the process. Another quarter have applied and not heard back. Over the last six months, “Most lenders were not open for forgiveness and didn’t provide information to businesses about how to apply,” said Jeanette Quick, lead counsel at Gusto.

The numbers are even worse for Black business owners: Three-quarters still haven’t received forgiveness. Durecia Moorer started the marketing firm ABCD & Company with three other Black colleagues in 2014. They had already built a relationship with PNC Bank, which helped them obtain a PPP loan last year. Many businesses owned by people of color struggled to get loans right away, thanks in part to being less likely to have relationships with banks.

But the relationship with PNC hasn’t done them much good now that it’s come time to apply to have the loan forgiven. Nearly 11 months since applications for PPP money first opened and Moorer applied, her loan still hasn’t been wiped from her balance sheet. If it isn’t forgiven, “Any additional debt would be a financial burden,” she said. She noted that having debt on their books impacts the valuation of the company, particularly if they look at things like joint ventures or mergers and acquisitions.

The forgiveness process has been so “overwhelming,” she said, that they’ve hired an accounting firm to ensure that it gets approved. PNC hasn’t communicated with them about it at all. It’s “been crickets,” she said.

It’s not that applications are sitting untouched at the SBA, which is tasked with approving PPP forgiveness applications submitted by lenders. It’s forgiven 1.8 million of the applications it’s received and has only 242,000 in process. But it still hasn’t received 3.2 million applications out of the 5.3 million loans disbursed in 2020.

In the fall, the holdup seemed to be that the SBA just hadn’t given lenders the information they needed. Forgiveness forms kept changing, and concrete guidance about which loans would be automatically forgiven and how has been slow to come. But the agency has since made some clarifications and issued paperwork. Now the choke point is lenders themselves.

There’s also a second round of PPP money available, and banks generate fees for every new loan — billions of dollars’ worth. “The incentives for banks [are] on the side of generating these new loans, because they receive their revenue from all the new PPP loans they generate,” said Luke Pardue, an economist at Gusto. They get no fees for pushing forgiveness applications through.

“Not having their loans forgiven is a huge burden that will weigh on these small business owners,” Pardue said. “It hampers their economic growth and the growth of the economy.” But banks don’t have the same sense of urgency.

Davis Senseman, a lawyer who works with small businesses, thought they would have finished up the forgiveness process with their clients and their own bank by October. But plenty of their clients are still waiting.

“When someone’s saying, ‘We’re going to forgive something for you,’ you’d like that to happen pretty quickly so you’re not carrying this around,” Senseman said. Now it’s a new fiscal year, so this debt is rolling over. Senseman worries some clients may erroneously include it on 2020 taxes, which are due soon, leading clients to overpay. Other clients are ready to sell their businesses after such a difficult year but don’t know whether and how quickly it can happen with an outstanding loan on the books. “It puts you in a holding pattern,” they said.

While their own bank said at the end of December that it would soon send a link allowing Senseman to apply for forgiveness, the link never showed up in their inbox. In late February. they reached out again and finally got a link. They applied — and are now waiting again to get an answer. They don’t think it’ll be ironed out before they have to file their taxes.

“What we need are just plain old grants, the way we would do for the auto industry or the banking industry,” Senseman said. “We need what people consider a bailout. Just give the money with no strings attached.”

For Moorer and her partners, ending the fiscal year without having the PPP loan forgiven created “a little bit of anxiety. You’re perturbed,” she said.

Banks generate fees for every new loan — billions of dollars’ worth. They get no fees for pushing forgiveness applications through.

Helen Redding, the owner of Nu Beginnings Hair Salon and Ari’z Martini Lounge in Waterloo, Iowa, had a hard time believing her $ 5,800 loan from the PPP would actually be forgiven, especially when she started asking her banker and was told to wait and that “hopefully” it would be forgiven, and even more so after she was asked to send document after document to complete her forgiveness application. “They wanted everything but how many teeth is in your mouth,” she said.

“I just gave up,” she said. “In my heart I just felt like I was going to have to pay it back, because who forgives a loan?” That would have been a hardship. “It would have been a mess,” she said with a wry laugh. “It would have just pulled me farther down.” She’s still barely making enough money to keep her two businesses afloat, especially since neither is anywhere near full capacity. That meager revenue was wiped out in October when she and her whole family got Covid-19, and they had to shut down for a month.

Finally, in late February, she received an email from her banker telling her she had been approved for forgiveness and needed to come sign paperwork. She feels optimistic, even if there’s a small voice in her head still doubting that it will actually be wiped off her books. She wishes the whole process had been easier. “I think they should have helped more of the smaller businesses,” she said. “To me it was set more for bigger businesses.”

The slow-walking of the forgiveness process for round one is now hampering the take up of the second round of PPP money, funded by the relief bill Congress passed at the end of last year. Of the $ 284 billion Congress infused into the program, just $ 140 billion has been doled out. (In the first round, $ 532 billion of $ 670 billion was tapped.) “This low take up of the PPP 2.0 pot is not because small businesses are doing better or don’t need the money,” Pardue said. “It’s because they’re being weighed down by the concerns around forgiveness.” Gusto’s survey found that, of the small businesses who haven’t applied yet, 10 percent said it’s because they haven’t received forgiveness on the first one and fear they can’t repay both; another 13 percent are worried they won’t receive forgiveness on the second round. Some of Senseman’s clients are thinking, “I don’t have the first one forgiven yet, I don’t want to mess around with the second one,” they said. But businesses only have until the end of March to apply.

“Conceptually the PPP program is a great idea,” Moorer said. But she thinks it needs to be restructured. “The accountability on the financial institutions is a part that’s missing.”

The Legacy of General Qassem Soleimani: A Woman’s Perspective

Despite Its Recent Postmortem, the New York Times Obituaries Desk Is Still Overlooking Women and People of Color