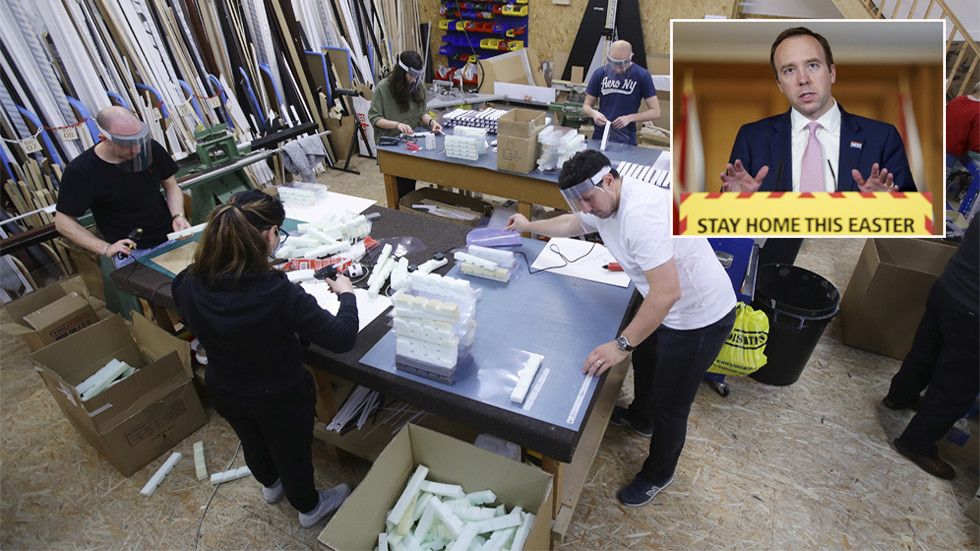 UK Health Secretary Matt Hancock’s response to plans for healthcare workers to reuse personal protective equipment (PPE) has sparked an outcry, after he said he lacks a “magic wand” to make the vital gear “fall from the sky.”

During questions from the House of Commons Health Committee on Friday, Hancock was asked to respond to proposals revealed in a leaked Public Health England (PHE) document, published earlier this week, which showed the reuse of PPE  was being considered as a “last resort” – a plan since confirmed by Downing Street.

The health minister insisted that it was a “clinical decision,” claiming that in some cases the practice of reusing PPE is being advised by clinicians, blaming the shortfall in coronavirus protective equipment on global shortages and absolving himself from personal responsibility.

I would love to be able to wave a magic wand and have PPE fall from the sky in large quantities and be able to answer your question about when shortages will be resolved.

Our Health Minister prays to God for ventilators and Matt Hancock wants a magic wand to wave for PPE. Yeah, I can see how following the advice of people like this will save lives alright. pic.twitter.com/YQuBBdQGuN

Hancock’s response was labeled “arrogant” and “sarcastic,” with some angry that the UK reportedly missed three chances to join an EU scheme to bulk-buy PPE. One commenter called the government’s response a “disgrace.”

Wow! Matt Hancock’s aroogant, sarcastic response – ‘I wish I could wave a magic wand and make PPE fall from the sky’ – when the UK has repeatedly ignored invitations to work with the EU in producing this, beggars belief. #cornoravirusuk

Others took particular issue with his “magic wand” assertion, arguing that frontline healthcare workers were “not asking for magic,” but merely requesting “the bare minimum a responsible Govt should provide.”

Hancock also revealed that British people entering the National Health Service with suspected cases of cancer had come to a “juddering halt” during the government’s tough Covid-19 lockdown measures.

It follows data published earlier in April that showed a 50 percent drop in heart attack accident and emergency attendees since the beginning of March in England. It’s feared people are avoiding hospitals during the coronavirus crisis due to concerns over being exposed to the deadly disease.

Also on rt.com Scandal in the making? A HUGE 70% of UK care homes could be riddled with Covid-19, private healthcare chief warns

Figures released by the Department for Health and Social Care on Friday showed that 108,692 people in the UK had tested positive for the virus since the start of the outbreak. Of these, 14,576 have died, 847 of them in the last 24-hour period of reporting.