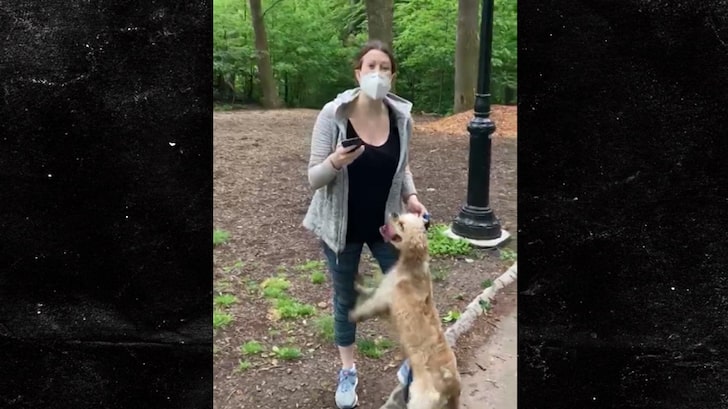 8:02 PM PT — It appears “Karen” was shamed into returning her adopted rescue. The Abandoned Angels Cocker Spaniel Rescue, Inc. — where she reportedly adopted the pup in March 2018 — said just hours after “Karen” went viral, she “voluntarily surrendered the dog in question to our rescue while this matter is being addressed … the dog is now in our rescue’s care and he is safe and in good health.”

This is a disgusting case of Karen-ing caught on video — a white woman calling the police and pretending a black man is attacking her … when he really just asked her to leash her dog.

This went down Monday in NYC’s Central Park … and the video starts with the woman attempting to leash her dog, but then she quickly walks toward the man recording the video … who’d complained her dog was off-leash. All dogs are required to be on-leash, by law, in Central Park.

What happened next is really heinous to watch play out — she asked the man to stop recording her, which he didn’t. She then threatened to call NYPD and “tell them there’s an African-American man threatening my life.”

The man encouraged her to call and, of course, she did and carried out her threat … which you have to see. The woman started yelling, and used a high-pitched, hurried tone — trying to make it sound like she was in imminent danger.

It worked. Law enforcement sources tell TMZ … NYPD responded around 8 AM, but when they arrived both parties had left, so no tickets, no arrests. We’re told the initial call dispatch put out to officers was for a “possible assault.”

Well, the cops didn’t get her, but with the video getting around on social media … the woman is, deservedly, getting dragged online. Several people believe they’ve ID’d her and her dog. BTW, the woman was also dragging/choking her poor dog during her phony-baloney rant to cops.

Aside from the harmful, blatant lie about a fellow citizen … she also wasted NYPD resources at a time when the city is still recovering from being the coronavirus epicenter.