UK Prime Minister Theresa May is losing control, as pro-EU sentiment grows and the British public tires of two years… 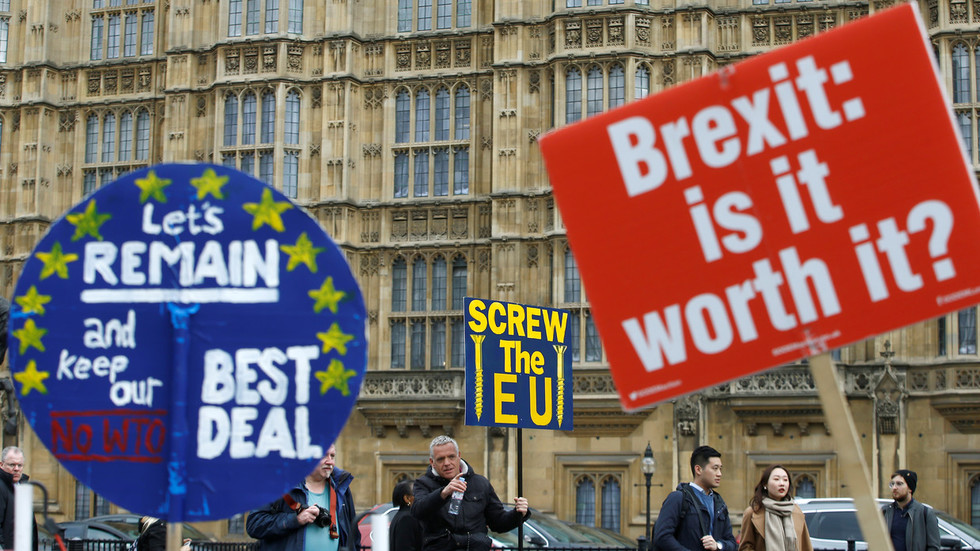 Parliament is set to debate no fewer than 16 alternative Brexit plans on Wednesday, after lawmakers voted on Monday to take the process out of May’s hands. The vote came after the PM tried and failed to push through her third Brexit proposal, even offering to resign in exchange for Brexiteer support.

“We’re undergoing a ‘palace revolution,’” Salmond said. “The MPs, fed up with Theresa May trying to get her own deal through, have decided to have a go themselves.”

Embattled within parliament, May cannot count on the support of the British people either, who Salmond said are “fed up with the shenanigans at Westminster.”

“The pro-European side are starting to get some traction,” the former first minister continued. “There was a million people demonstrating in the streets of London last Saturday. That’s not an inconsiderable number.”

Support for May has dwindled, even among former allies. While Euroskeptic Tory MP Jacob Rees-Mogg has indicated that he might back May’s deal to ensure Brexit happens by any means possible, a core of Brexiteers within his European Research Group caucus have held steady on their refusal to back it.

The Northern Irish Democratic Unionist Party (DUP) has also refused to back May’s Brexit deal, based on its inclusion of an ‘Irish backstop,’ which would see Northern Ireland remain in the EU Customs Union to avoid the reemergence of a hard border on the island of Ireland, effectively making the Irish Sea a customs barrier between NI and the rest of the UK. Worried that such a situation would leave Northern Ireland isolated, the DUP has called May’s deal “toxic,” and pledged to support alternative plans.

“[May’s] serious inability to understand Northern Ireland may be the rock on which her prime ministership perishes,” Salmond said.

“If they’re unable to come to any deal… the UK would exit Europe in a ‘hard Brexit’ on April 12. Historically, on April 12 [1912], the Titanic was busy sailing towards an iceberg. Where was the Titanic built? Belfast, in Northern Ireland.”