After a roller-coaster week on Wall Street raised fears of a recession, top White House economic advisor Peter Navarro was…

But all Navarro accomplished was demonstrating—yet again—how little the Trump administration seems to understand a trade war that’s proving to be anything but “good and easy to win.”

In an interview with CNN’s Jake Tapper, Navarro claimed that the economy remains “very strong” and dismissed worries about U.S. Treasury bonds’ odd behavior last week. But when pressed by Tapper about the impact that the trade war is having—which includes not just the monetary cost of the tariffs but heightened instability and uncertainty for American businesses—Navarro veered into fantasyland.

“The tariffs are hurting China. China is bearing the entire burden of the tariffs,” Navarro said. “Look at the data. There is no evidence whatsoever that American consumers are paying any of this.”

Perhaps Navarro should look at the data too. 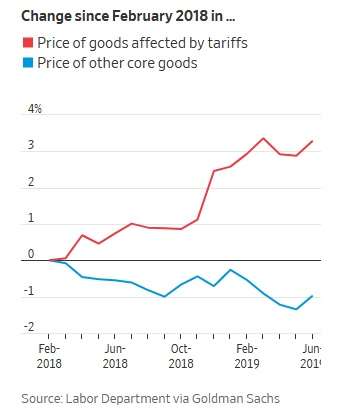 He could start with The Wall Street Journal, which last week reported on a Goldman Sachs analysis of consumer price index data released by the Labor Department. That analysis found that consumer goods affected by tariffs have increased in price by about 3 percent since February 2018, while goods not subject to tariffs have fallen in price by about 1 percent.

If he wanted to dig a little deeper, Navarro could look at the May 2019 paper published by economists at Harvard, the University of Chicago, and the Federal Reserve Bank of Boston. That analysis of the trade war found that China was absorbing about 5 percent of the tariffs’ costs while American consumers were getting hit by the other 95 percent.

Or he could dig up a March 2019 paper published by the Centre for Economic Policy Research, a London-based think tank, that found the Trump’s tariffs were draining about $ 1.4 billion out of the U.S. economy every month. That’s above and beyond the actual direct cost of paying the tariffs.

“We find that the U.S. tariffs were almost completely passed through into U.S. domestic prices, so that the entire incidence of the tariffs fell on domestic consumers and importers,” wrote Mary Amiti, Stephen J. Redding, and David Weinstein, the three researchers who authored the paper.

If he’s still not convinced, Navarro could pick up a more specific case study, like this April 2019 review of the Trump administration’s tariffs on washing machines. In 2018, researchers at the University of Chicago and the Federal Reserve found, those tariffs generated $ 82 million for the U.S. Treasury—but cost consumers about $ 1.2 billion.

In fact, the tariffs on imported washing machines ended up increasing the retail price of not just washing machines but dryers too—even though dryers were not subject to the new import taxes imposed by the Trump administration in January 2018. The new tariffs caused a spike in consumer prices for both household appliances after a years-long decline. 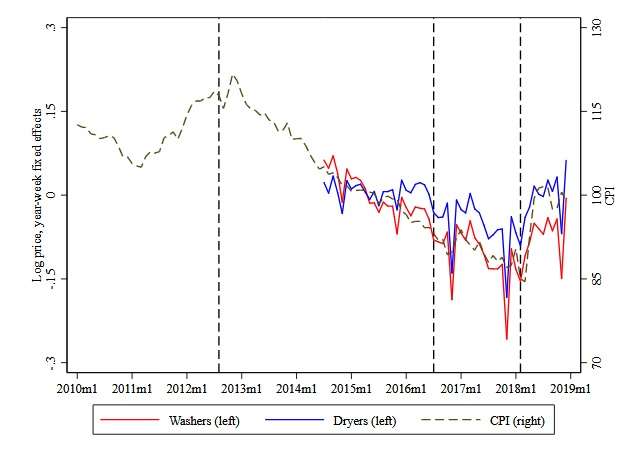 The data are pretty clear. Tariffs are taxes on imports that translate into higher prices for American businesses and consumers. Navarro’s claims that Americans aren’t paying for them are economically illiterate nonsense. It would be one thing for the Trump administration to claim—as it has on some occasions—that the tariffs are a necessary burden for Americans to bear in pursuit of better trade deals, or as a means to getting China to change its bad behavior. But simply lying about the basic realities of the trade war serves only to undermine whatever strategy the White House is pursuing.

Last week, after announcing that new tariffs on Chinese imports would be postponed until mid-December to avoid soaking American consumers during the holiday shopping season, Navarro said the maneuver was “a Christmas present to the nation.”

But why would that be a Christmas present to Americans if Americans aren’t paying for the tariffs?

It’s remarkable that the Trump administration has been able to ignore economic reality for as long as it has. But it’s now becoming clear—on the stock market, in the polls, and from the White House’s own jumbled messaging—that the economists were right all along: Tariffs are taxes, and Americans are footing the bill.