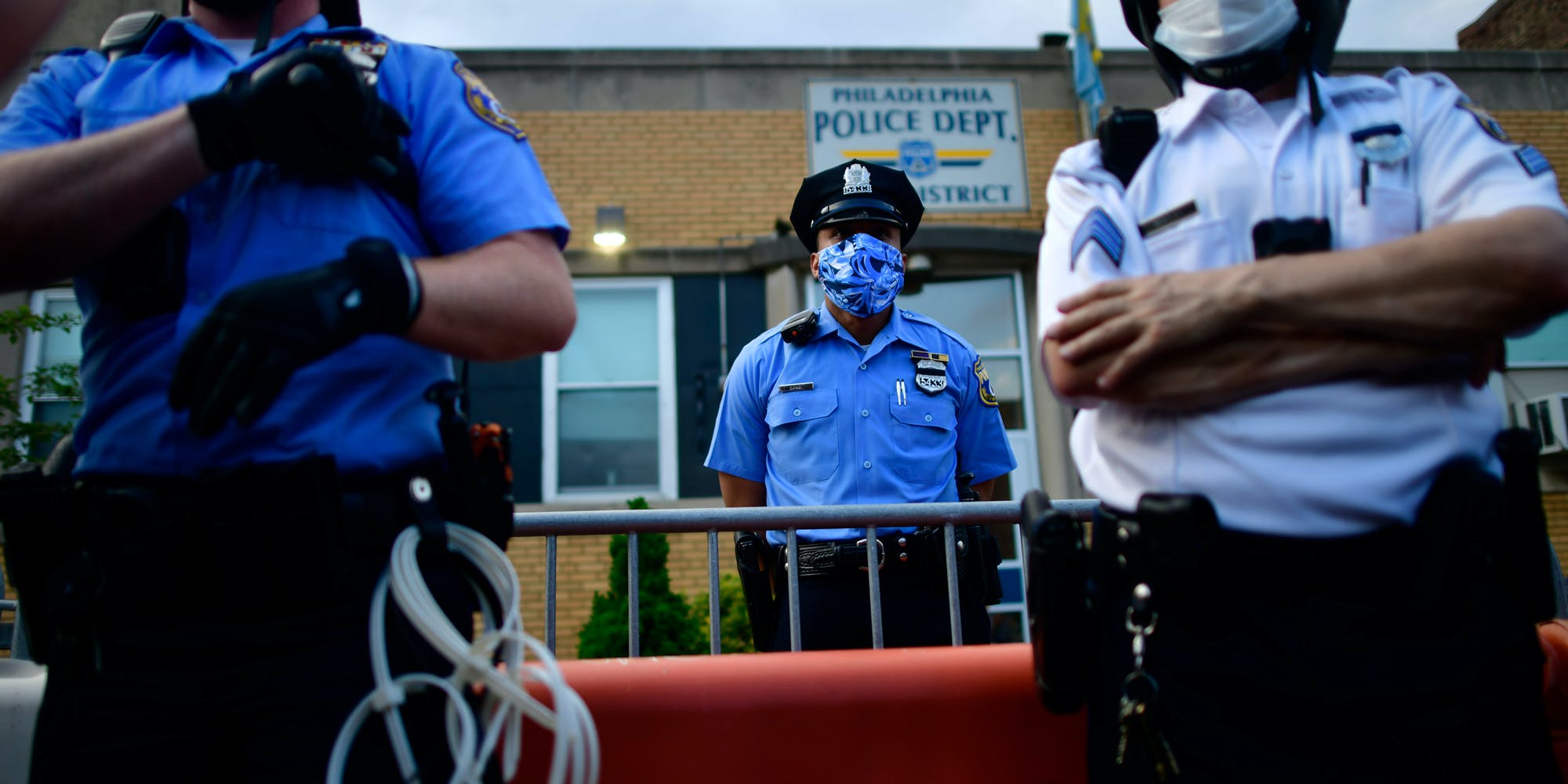 A political action committee working to elect pro-police candidates to state and local office apologized last week for sending a fundraising email that blamed George Floyd for his own death. The Protect Our Police PAC formed in Philadelphia last June after nationwide protests against police brutality with the goal of ousting Larry Krasner, the city’s reformist district attorney. In the nine months since its inception, the group has backed candidates across at least 15 states. This is not the first time the committee has come under criticism for distributing racist materials.

“Our founding fathers knew the importance of a fair justice system, but unhinged radical cop haters are taking every opportunity to pervert the law to advance their agenda. That’s exactly what’s happening in Minnesota to officer Derek Chauvin,” read the April 1 email. “Let’s get one thing clear: George Floyd tested positive for COVID-19 and was high on a lethal dose of fentanyl when he died May 25th, 2020… but the mainstream media doesn’t want you to know that!” Sent from the organizationwide POP PAC account, the email was signed by President/Treasurer Nick Gerace, a former Philadelphia police officer.

In a statement on Friday, Gerace blamed the message on a marketing firm, saying that the email did not reflect his values or those of the PAC and that the group had since terminated its relationship with the firm. The statement claimed that the PAC had hired the marketing team several months before, but it did not name the firm, nor did it address why it had apparently not shown its client the content for approval before sending it out. Gerace did not answer questions from The Intercept about whether anyone at POP PAC had reviewed the contents before distribution, whether the PAC had returned contributions it received through the email’s donation links, or whether the PAC could name the marketing firm.

Krasner, up for reelection this year, is one of a growing number of prosecutors facing backlash from local and national police forces and politicians for using decarceral approaches to prosecution. When several former Philadelphia police officers started POP PAC in June, their stated goal was to help “recruit and elect candidates that will never turn their backs on our Police Officers and other first responders on the front line.”

The PAC got its start with an early investment of $ 10,000 from the Philadelphia Fraternal Order of Police Lodge #5, which represents the Philadelphia Police Department and is among Krasner’s strongest critics. The police union is backing Krasner’s opponent, former homicide prosecutor Carlos Vega, and POP PAC had been expected to follow suit. But after last week’s email, the Philadelphia Inquirer reported that Vega has said he doesn’t want the group’s backing.

Vega is still campaigning with the local FOP, which gave another $ 70,000 to POP PAC between January and March of this year. One of the PAC’s most prominent supporters is Republican Timothy Mellon, an heir to the Mellon banking fortune and a top donor to former President Donald Trump. Mellon, who once called federal programs like the Affordable Care Act and food stamps “slavery redux,” has provided POP PAC with more than two-thirds of its funds.

Asked about accepting support from FOP while distancing his campaign from POP PAC, Vega told The Intercept that he would hold the FOP accountable, which he sees as a top voter concern.

POP PAC has also faced criticism for failing to file its campaign finance disclosures on time. It raised just over $ 730,000 in 2020 “from thousands of donors from all 50 states,” according to its website. The group is a state PAC registered in Pennsylvania, not a federal PAC, and as such is required to follow state and local reporting requirements wherever it operates. In Georgia, for example, the registered affiliated POP GA PAC filed its 2020 campaign disclosures in February 2021, four months after the October deadline. In Pennsylvania, POP PAC filed two of its 2020 campaign disclosures in February 2021, months after the October and December deadlines. The first state and local filing deadlines for 2021 in Pennsylvania and Philadelphia were on Tuesday; the group did not meet them.

Last Thursday’s email lamented “months of violent looting and riots that caused over a billion dollars in damages, hundreds of small business closures, dozens of untimely deaths, and millions of dollars profited from left-wing organizations like Black Lives Matter.” Now, it went on, “Chauvin is facing trial for a murder he did not commit — leftist radicals want to make an example out of an innocent man that followed the protocol he learned in his training. They want to ruin his life for political gain.”

The next day, after the Philadelphia Inquirer reported on the email’s contents, Gerace condemned Chauvin’s actions, saying they “were examples of bad policing and poor training that directly caused George Floyd’s death, in my opinion.” The email’s “messaging and innuendo” were “not in line with our mission and I vehemently denounce it,” he continued. “We can do better. We will do better. We must do better.”

Gerace’s comments reflect the significant pressure law enforcement groups are feeling as public opinion on policing and patterns of brutality has shifted since Chauvin killed Floyd last year. Gerace claims the case touched on one of the main motivations for starting the PAC. “Not all cops are bad or bastards,” his statement read. “No one hates a dirty cop more than a good cop.”

Asked to comment further, Gerace said he had been on record numerous times in the last year “saying the opposite of what is in this email. I don’t agree with its contents at all.”

Other fundraising emails sent from the PAC this year call Black Lives Matter an “anti-cop operation” with a “twisted ideology”; claim “blood is on [the] hands” of the “defund the police movement” for endangering police and everyday citizens; and decry the George Floyd Justice in Policing Act, a police reform bill that the House passed in March, as “something that should scare us all.”

One mailer pictured Shalena Cook Jones, a Black woman and the Democratic challenger to Republican incumbent Meg Heap, holding up a sideways peace sign next to George Soros. The mailer read: “Billionaire liberal George Soros has funded unqualified district attorneys in cities across America in an effort to buy our criminal justice system.” The PAC paid for billboards picturing Cook Jones making the same gesture, which some local observers, including academics and media outlets, thought was designed to look like a gang symbol. The group made an independent expenditure to support Heap, who said the billboards showed “distasteful content,” and the PAC later took them down. In a statement last October, the PAC said criticisms of the ads as racist and anti-Semitic were “false accusations meant to discredit and distract.” POP PAC spent just over $ 50,000 on the Georgia race, but Jones, backed by the Soros-funded Justice & Public Safety PAC, defeated the incumbent.

Despite the Philadelphia’s police union’s support for Vega, Krasner’s opponent, Gerace said the PAC has never and would not seek to back Vega directly. “POP PAC has never sought to endorse him because our effort has been laser-focused on holding DA Krasner accountable for his dangerous policies and deadly consequences,” Gerace told The Intercept. “We have not and will not endorse or directly support his campaign.”

According to Sergio Cea, an organizer with Reclaim Philadelphia, which is backing Krasner, the sentiments in the fundraising email are typical of police forces in the Philadelphia area. “This is like a pattern of what police do in Philadelphia, fundraise off of the abuse in our community,” Cea said. He noted that last year, the local police union sold T-shirts with the name of an officer who had abused protesters with a baton over the summer.

“It’s one thing if you’re saying this stuff to police officers,” said Cea. “But if you’re talking to everyday Philadelphians and voters, many of them who have been brutalized by the police department in Philadelphia, these kinds of news stories lead them to say, ‘You know what, no matter what I’m gonna back Krasner.’”

Deconstructed Live From Toronto: Is Canada Really a Progressive Paradise?