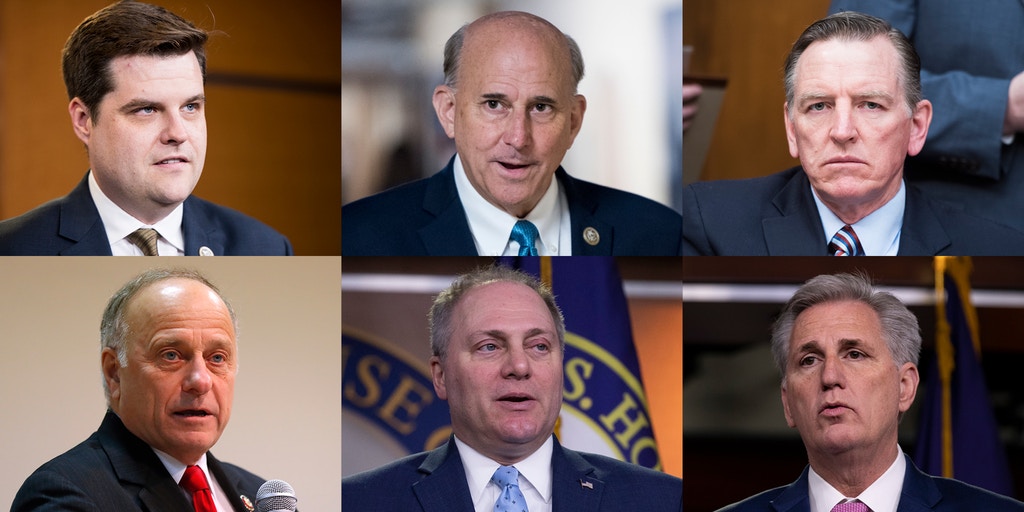 “She should either resign from Congress or certainly resign from the House Foreign Affairs Committee.”

So declaimed President Donald Trump in the White House on Tuesday, as he denounced Rep. Ilhan Omar, D-Minn., for her “terrible” remarks and her “lame” apology.

To be clear: Omar apologized “unequivocally” for her two tweets on Israel and the American Israel Public Affairs Committee, yet Trump has never apologized for any of his bigoted, sexist, racist, Islamophobic, and — yes — anti-Semitic remarks.

Here’s Trump’s problem: The modern GOP is riddled with bigots, Islamophobes, and anti-Semites.

There is a bigger issue here, though. Trump said that “anti-Semitism has no place in the United States Congress.” I agree with him. But here’s his problem: The modern GOP is riddled with bigots, Islamophobes, and anti-Semites.

If the president wants Omar to resign from Congress over alleged anti-Semitism, here are six Republican members of the House, including the two most senior members of the GOP leadership, who need to resign first.

House Minority Leader Kevin McCarthy, representative for California’s 23rd Congressional District, has promised to “take action this week” against Omar over her tweets.

This is the same McCarthy who took to Twitter in October 2018 to accuse three Jewish billionaires — George Soros, Tom Steyer, and Michael Bloomberg — of trying to “buy” the midterms. He posted his tweet just a day after Soros received a pipe bomb at his home in New York.

Steyer called the tweet “straight-up anti-Semitic.” McCarthy, though, continues to refuse to apologize for it, saying he did nothing wrong. So why did he delete it? And why isn’t Trump calling on him to resign from Congress too?

Yet, in 2002, Scalise, then a Louisiana state representative, attended and spoke at a convention of the white supremacist European American Unity and Rights Organization, a group founded by David Duke. You remember Duke, right? The Holocaust-denying former grand wizard of the Ku Klux Klan who has been described by the Anti-Defamation League as “perhaps America’s most well-known racist and anti-Semite.”

Scalise later said he “regretted” — but did not technically apologize for — attending the EURO event. When Louisiana-based political reporter Stephanie Grace first met Scalise, he likened himself to Duke. Grace recalled, “He told me he was like David Duke without the baggage.”

Why is Scalise still in Congress?

Rep. Louie Gohmert represents Texas’s 1st Congressional District and is a darling of the tea party.

In December, he appeared on the Fox Business channel to discuss Google, but then decided to pivot and attack — yep, you guessed it — the right’s favorite Jewish billionaire.

Appearing on Fox Biz, Louie Gohmert says "George Soros is supposed to be Jewish but you wouldn't know it from the damage he inflicted on Israel and the fact that he turned on fellow Jews & helped take the property that they owned."

“George Soros is supposed to be Jewish, but you wouldn’t know it from the damage he’s inflicted on Israel,” Gohmert said. “And the fact that he turned on fellow Jews and helped take the property that they owned. It’s the same kind of thing.”

This ludicrous and anti-Semitic claim that Soros helped “take the property” of fellow Jews during World War II has been repeatedly and thoroughly debunked. Soros, for the record, was 14 years old at the end of the war.

“Congressman Louie Gohmert for some reason went out of his way to bring up George Soros and made unsubstantiated and false allegations against him,” host Stuart Varney later announced, live on air. “I want to make clear those views are not shared by me, this program, or anyone at Fox Business.” How anti-Semitic and unhinged do you have to be for a Fox host to have to loudly disown you?

And why is Gohmert still a member of Congress?

I’ve referred elsewhere to Rep. Matt Gaetz, who was elected to the House of Representatives from Florida’s 1st Congressional District in 2016, as “the most despicable and shameless member of the United States Congress.”

You want anti-Semitism? Where to begin with Gaetz? He invited the notorious Holocaust denier Chuck Johnson to be his guest at the State of the Union and later defended Johnson: “He’s not a Holocaust denier; he’s not a white supremacist. Those are unfortunate characterizations of him.”

He has appeared on Alex Jones’s “Infowars” show. Jones has said that “it’s not that Jews are bad, it’s just they are the head of the Jewish mafia in the United States. They run Uber, they run the health care, they’re going to scam you, they’re going to hurt you.”

He suggested the caravan of migrants that set out from Central America in October 2018 was funded by George Soros, who might be “giving cash 2 women & children 2 join the caravan & storm the US border.”

Trump has called Gaetz “one of the finest and most talented people in Congress.” Why hasn’t he called on the Florida representative to resign over anti-Semitism?

“A newcomer member of Congress has apologized for her remarks,” said House Speaker Nancy Pelosi, D-Calif., belatedly defending Omar from Republican attacks on Wednesday. “It took them what, 13 years to notice Steve King?”

The GOP has tried to draw an absurd and offensive comparison between King and Omar.

The GOP has since tried to draw an absurd and offensive comparison between King and Omar — aided and abetted by irresponsible members of the media — while demanding credit for taking action against King. But King has a long history of white nationalism, Islamophobia, and anti-Semitism that was ignored and overlooked by House Republicans — and a GOP presidential candidate! — for years. “Steve King Is A White Supremacist, And The GOP Doesn’t Care,” read a HuffPost headline in the summer of 2018.

Long before his racist remarks to the New York Times, King retweeted a neo-Nazi. He sat on a panel with white nationalists. He praised both the German and Austrian far right. According to the ADL, he even “denigrated the Jewish history of the Holocaust.”

Why is there a place for him in the United States Congress?

Rep. Paul Gosar, the Republican who represents Arizona’s 4th Congressional District, has claimed that the far-right rally held in Charlottesville, Virginia, in August 2017 — at which marchers chanted “Jews will not replace us” — was “created by the left” and led by an “Obama sympathizer.” He has also suggested that Soros funded the event and falsely claimed that the Jewish billionaire “turned in his own people to the Nazis.”

In fact, Gosar is so brazen in his conspiratorial, anti-Jewish bigotry that his own family has felt the need to publicly denounce him. “We are aghast that Paul has sunk so low that he now spews the most despicable slander against an 87-year-old man without a shred of proof,” a letter signed by seven of his siblings said in October 2017. “It is extremely upsetting to have to call you out on this, Paul, but you’ve forced our hand with your deceit and anti-Semitic dog whistle.”

In October 2018, Gosar’s brother David went even further, describing the representative’s rhetoric as having “helped feed the anti-Semitism that just resulted in the murder of 11 people in a Jewish synagogue and an attempt on Mr. Soros’s life.”

When will Gosar be quitting the House?

“Fundamentally,” as the prominent Jewish-American journalist Peter Beinart observed on Twitter, “the furor over @IlhanMN’s tweets isn’t about policing bigotry or even anti-Semitism. It’s about policing the American debate over Israel.” I would go further: It’s also about smearing and demonizing women of color, especially Muslim women of color, in the Democratic Party.

Republicans don’t give a damn about anti-Semitism. They just don’t care. And we’ll know for sure that they do when they ask these six white Republican men to resign from Congress.

The Day After: What Happens If Israel Annexes the West Bank?