Spread the love According to a recent settlement from a lawsuit against the Michigan Department of Corrections, multiple corrections officers… 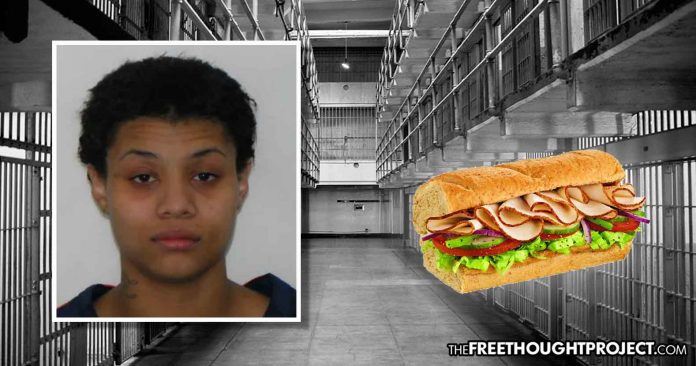 According to a recent settlement from a lawsuit against the Michigan Department of Corrections, multiple corrections officers made jokes about the potential of an inmate killing herself and even made bets that she would. Sadly, 25-year-old Janika Edmond did end up killing herself, and one of the corrections officers ended up winning lunch, a Subway sandwich. Now, the family has reached a settlement in the case for $ 860,000.

Edmond had a history of depression and suicide attempts, and she allegedly announced to the prison guards that she was going to kill herself, but was ignored by the guards as people in her position often are. But these officers went further, not only ignoring her cries for help, but actually turning them into a sick game.

The lawsuit noted that everyone in the prison was well aware of her condition, considering that she had attempted suicide or requested to be put on suicide watch 8 times in 13 months.

Her mental health was such a concern prison doctors ordered she receive certain treatments for her depression, and that she be kept under a close watch in case she ended up attempting suicide, or even talked about it.

However, police never called prison doctors or any authorities when Edmond acted out and then threatened to kill herself. The officers instead took her and isolated her in a shower area, threatening to take her to solitary confinement. When she asked for a suicide-prevention vest, her cries for help were ignored.

At this point, the lawsuit alleges that video footage at the prison, shows the guards walking away and leaving her alone in the shower area, taking bets as to whether she was going to kill herself or not.

Just minutes later, Edmon did in fact attempt suicide by hanging herself with a bra, and when Edmon’s unconscious body was found, Officer Dianna Callahan was seen on video pumping her fists in the air in celebration, shouting “Somebody owes me lunch!”

Callahan had made a bet with fellow officer Kory Moore about whether or not the woman would go through with it.

According to the lawsuit, “Upon information and belief, Callahan made a bet with Moore that Edmond would become suicidal.”

To make matters even more disturbing, choking noises and commotion can be heard very clearly in the video, and the officers were in earshot, meaning they ignored what was going on, even knowing that an inmate was attempting suicide.

Eventually, Edmon was taken to a hospital where she was declared brain dead, and she lost her life four days later.

It also seems that there was potentially an attempted cover-up after the suicide attempt. Edmon’s mother came by the prison to visit less than an hour after the incident, and she was turned away and told that her daughter was not accepting visitors. However, they did not inform the family about the suicide attempt. In fact, the family was not informed until the following day.

Michigan Department of Corrections spokesperson Chris Gautz gave the following lame excuse for not informing the family of the incident.

“In this case, the prisoner had chosen not to list her biological family in her emergency contacts. We respected her wishes,” Gautz told The Daily Beast.

Surprisingly, Callahan, 49, of Flint, pleaded no contest to involuntary manslaughter last October and was sentenced to six months in jail.

According to the Detroit Free Press, attorney David Steingold said it was important that the department “pay a price that is sufficient to let them know this type of conduct not only will not be tolerated, but will be punished.”

We agree. Those who think a woman’s life is worth no more than a Subway sandwich have no place in public service and are a stain on humanity.

The “Easy” Answer To The Bipartisan National Debt Racket

People Are Missing the Point on Trump’s Tax Returns

Enjoy Tax Day 2021. They Just Get Worse From Here.