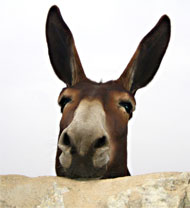 Daniels says she didn't have a problem with the donkey being there,"I've done a lot of riding myself ya'll know, but mostly it was horses down there at Baton Rouge. Oh, and in those home movies I made."

Donald Trump has denied the donkey allegation. "Miss Daniels is working for the Russians or the Mexicans or some enemy of the U.S., which is basically the whole of the rest of world", Trump claimed. "This is very, very untrue, very untrue. I hate donkeys, especially Mexican ones and have never been attracted to them. This is more fake news, fake news. Miss Daniels, who I have never met, will be hearing from my lawyer very, very soon, entirely on his own initiative, nothing to do with me.".

Trump left the press conference immediately after issuing his denial to view the latest designs for building a wall around the entire U.S..