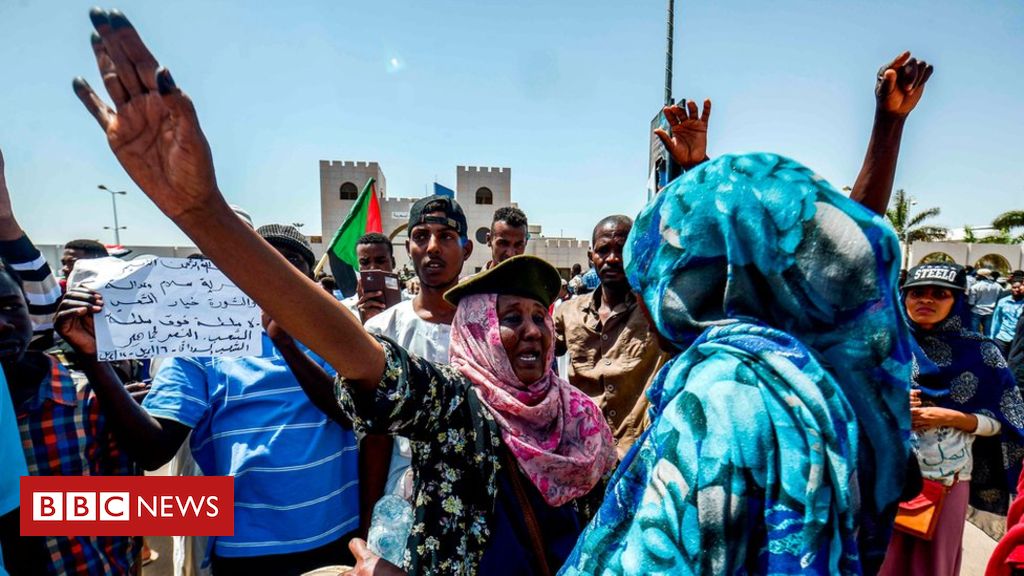 Leaders of the protests in the Sudanese capital Khartoum have called on supporters to stay in the streets two days after the military coup.

They are demanding an immediate move to civilian rule after the army ousted long-time leader Omar al-Bashir, putting him in custody.

The military wants to hold power for two years, followed by elections.

His departure was announced hours after the coup leader himself, Defence Minister Awad Ibn Auf, stepped aside.

No official reason has been given for either departure.

Privately-owned Sudan News 365 reports that opposition leaders are meeting with the military on Saturday to discuss “transitional arrangements”.

The Sudan Professionals Association (SPA), which has been spearheading the demonstrations, announced its negotiating team on its Facebook page.

It had earlier called on the armed forces to “ensure the immediate transfer of power to a transitional civilian government.”

Omar el-Digeir, leader of the opposition Sudanese Congress Party, said the military should not be “the sole custodians of power”.

A growing economic crisis has gripped the country since the oil-rich southern part split away in 2011, and Thursday’s coup followed months of unrest over the cost of living.

Ebba Kalondo, a spokeswoman for the African Union, said it was now time for all sides to talk to each other.

“More now than ever, it’s time to engage in an inclusive dialogue, to create the conditions that would make it possible to meet the aspirations of the Sudanese people, to form democracy and good governance and restore constitutional order as soon as possible.”

How did the latest drama unfold?

When Mr Bashir was removed, he was replaced by a military council led by Mr Ibn Auf.

But demonstrators camping out outside army headquarters in Khartoum refused to disperse, rejecting Mr Ibn Auf as an ally of Mr Bashir.

On Friday, the new leader announced he was resigning and being replaced by Lt-Gen Abdel Fattah Abdelrahman Burhan, who is seen as a less controversial figure.

But the move failed to satisfy protesters who have kept up their sit-in in the capital.

They called for the abolition of “arbitrary decisions by leaders that do not represent the people” and the detention of “all symbols of the former regime who were involved in crimes against the people”.

“Until these demands are fully met, we must continue with our sit-in at the General Command of the Armed Forces,” the SPA said.

On Saturday, Sudanese TV reported the resignation of Gen Gosh, head of the National Intelligence and Security Service (NISS) which has powerful forces within the capital.

The general has been a key ally of Mr Bashir since the early 1990s and is among 17 Sudanese officials indicted for genocide, human right abuses and war crimes in the Darfur region by the International Criminal Court (ICC) in 2009.

The NISS has extensive powers and influence, supervising the paramilitary Rapid Support Forces.

At least 16 people have been killed by stray bullets at the protests since Thursday, police say.

What will happen to Bashir?

He has also been indicted by the ICC on charges of war crimes and crimes against humanity in Darfur.

But the military council has said it will not extradite Mr Bashir, who denies the charges, although he may be put on trial in Sudan.

Mr Ibn Auf was head of military intelligence during the Darfur conflict and the US imposed sanctions on him in 2007.

How big are these events?

This is an exciting moment, writes the BBC’s Africa editor, Fergal Keane. It is happening in Sudan but the significance of these forces working peacefully for change is universal.

It may be very precarious but it is also full of possibility, he says.

One of the defining images of the peaceful protests in Khartoum is that of demonstrator Alaa Salah leading a crowd in anti-government chants.

The image has been taken up by artists in turn, as French broadcaster Franceinfo reports.

Have you been taking part in protests? You can share your experiences by emailing haveyoursay@bbc.co.uk