At least three of Lee’s policy staffers exchanged emails shortly after UAW’s April 9 petition to represent Volkswagen’s hourly workers at the German company’s sole U.S. car manufacturing plant. One of Lee’s policy analysts reached out to a former chief of staff to retired Sen. Bob Corker, who was involved in the effort to bust the UAW’s first attempt to organize Volkswagen workers five years ago.

The emails also show a senior Volkswagen executive requesting to brief the governor’s office on the union drive. The company also helped plan a visit by Lee, a Republican, to the Chattanooga plant on April 29 — the date the UAW had asked the National Labor Relations Board to schedule a union election, the emails reveal. The Republican-dominated board threw out the petition on May 22 due to a technicality; the UAW immediately refiled a petition, and the board has scheduled an election for June 12, 13, and 14.

The governor implied to Volkswagen workers that Tennessee government officials have been successful in luring companies like Volkswagen to the state because of the lack of unions, according to a leaked recording obtained by Labor Notes. He also leaned heavily on his experience as the president of the Lee Company — the non-union mechanical, facilities, and home services business founded by his grandfather.

“My experience is that when I have a direct relationship with you, the worker, and you’re working for me, that’s when the environment works the best,” Lee said. The comment was met with a raucous mixture of clapping and boos.

“Companies working hand-in-glove with conservative politicians to defeat unions is becoming the new normal in the South.”

The governor’s actions are part of a multiyear trend of Southern politicians providing support to the union-busting campaigns of large manufacturers. Mississippi Gov. Phil Bryant’s statement that workers should vote for the UAW if they want to lose their jobs and “end manufacturing as we know it” in the state received wide circulation in the week leading up to the UAW’s failed election at Nissan in 2017. Former South Carolina Gov. Nikki Haley was described as “Boeing’s best union buster” by Bloomberg for her role in discouraging workers from joining the Machinists union; she was even featured in an anti-union radio ad paid for by Boeing. Both Nissan and Boeing remain non-union.

“What we are seeing is that right-wing politicians are using the power of the state in instrumental ways to advance broader corporate interests,” said Nelson Lichtenstein, labor history professor at University of California, Santa Barbara. “Companies working hand-in-glove with conservative politicians to defeat unions is becoming the new normal in the South.” 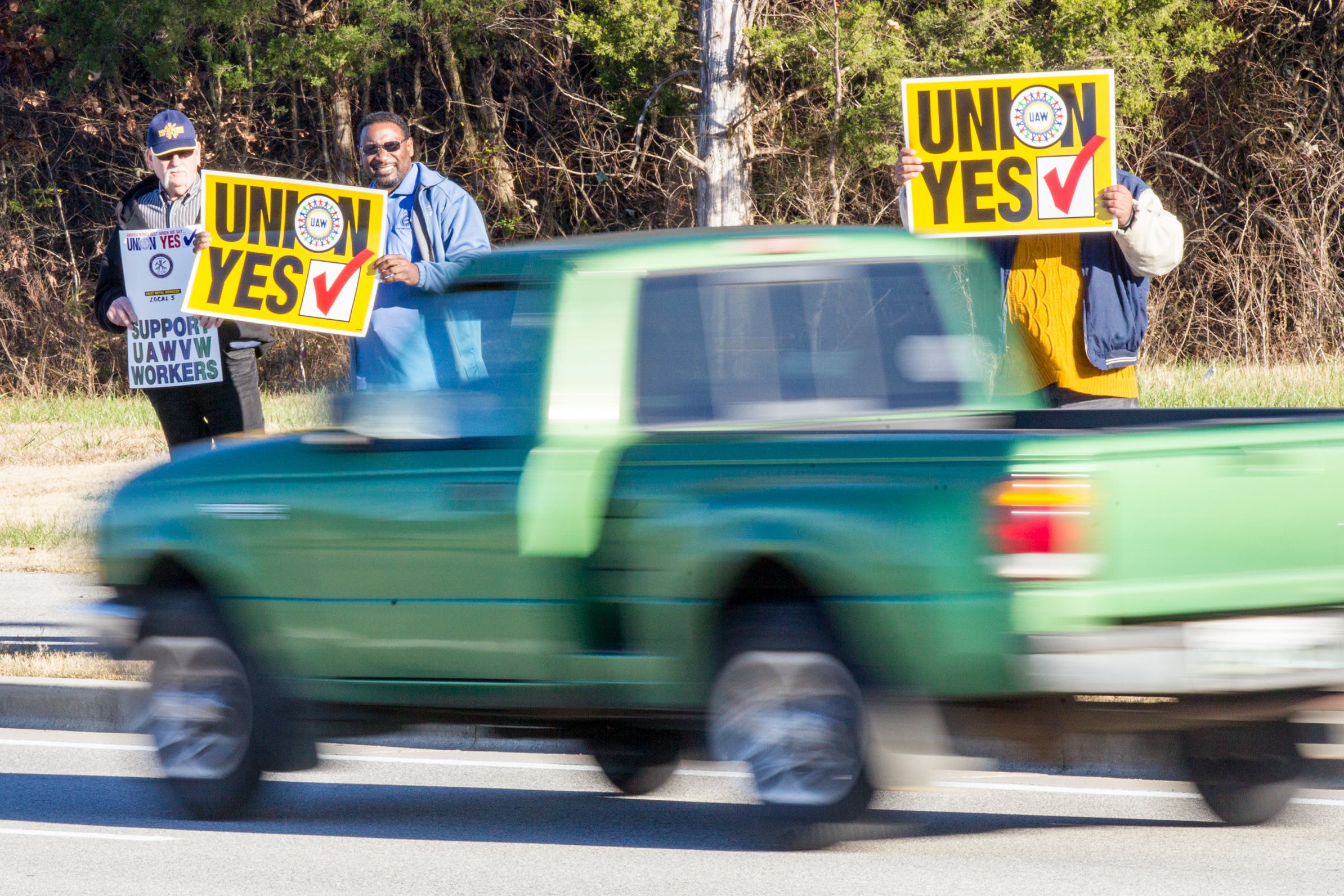 Union supporters hold up signs near the Volkswagen plant in Chattanooga, Tenn., on Dec. 4, 2015.

Volkswagen’s Chattanooga employees made their first bid at unionizing in 2014, hoping to establish a works council like their German counterparts. Works councils provide for employee representatives to meet with management and make collective decisions regarding production goals, working conditions, and other issues internal to the plant.

Though the company was ostensibly neutral, if not supportive, toward the union drive, the UAW narrowly lost following a coordinated campaign of threats and intimidation from the state’s Republican politicians and union busters. The coalition to quash the union effort included Corker, the former U.S. senator, and his chief of staff Todd Womack. Corker’s office was coordinating with an anti-UAW group called Southern Momentum and officials in then-Gov. Bill Haslam’s administration, according to emails obtained by Nashville’s News Channel 5 after the election.

Volkswagen’s tone toward unionization changed abruptly in 2015, following an announcement from the Environmental Protection Agency that the company had installed software on millions of so-called clean diesel automobiles that allowed the cars to cheat emissions testing devices while pumping out toxic and illegal levels of pollution on the road.

Shortly after the “dieselgate” scandal hit, the UAW filed a petition for a union election to represent 162 skilled trades workers at the Tennessee Volkswagen plant. The UAW won that election, but the company refused to bargain and hired the notorious union-busting law firm Littler Mendelson to represent them. The National Labor Relations Board ruled that Volkswagen was violating federal labor law, and the company appealed. The case wound through the courts for years until the UAW disclaimed the skilled trades unit after filing in April for a new election to represent all 1,709 hourly workers at the Chattanooga plant. (The NLRB’s reason for throwing out the petition was that the UAW erred in filing for an election before disclaiming the unit.) 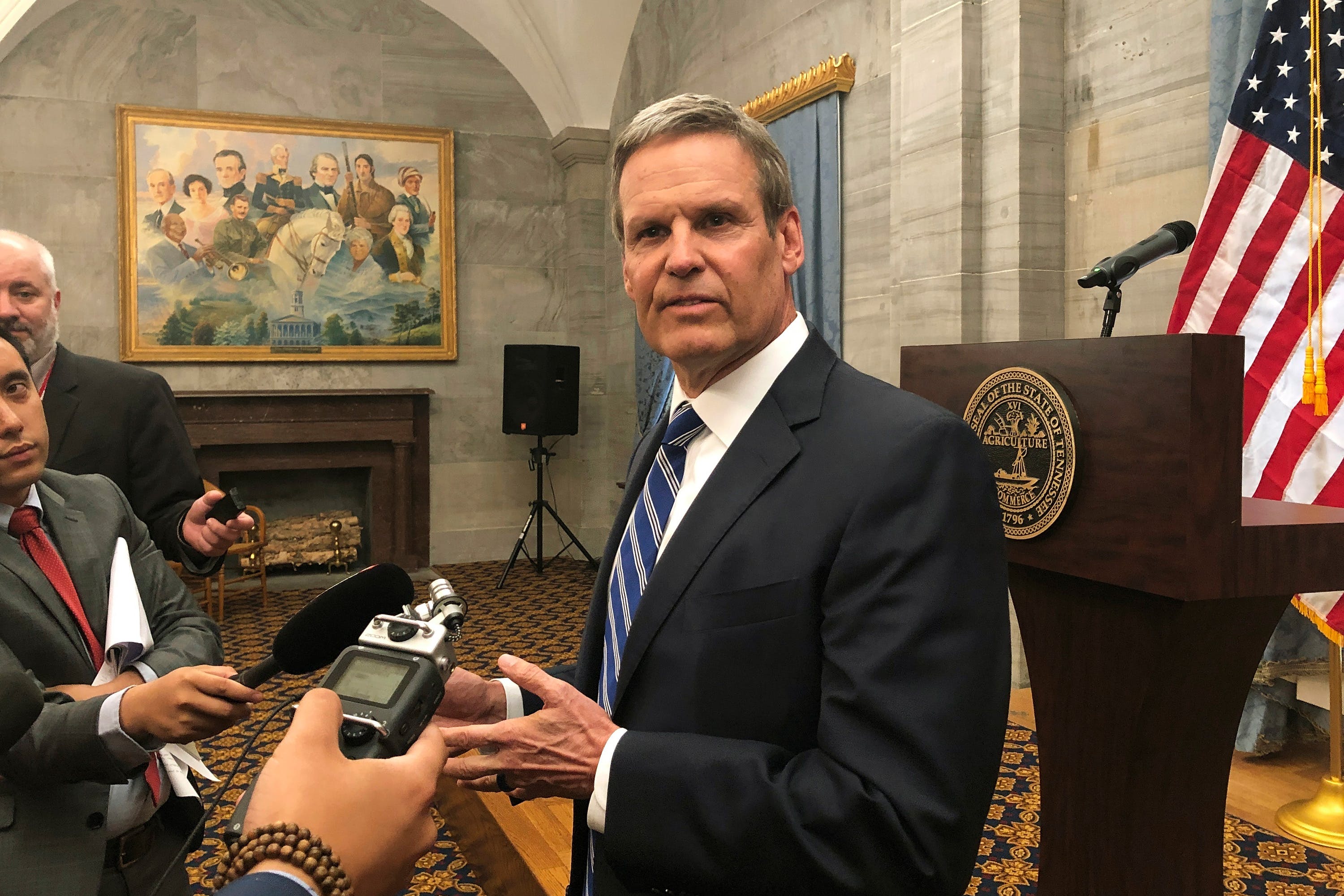 Tennessee Gov. Bill Lee talks to reporters at the Capitol in Nashville on April 25, 2019.

On April 9, the day UAW filed its original petition, Tony Niknejad, the governor’s policy director, sent an email to Liz Ashwood, a policy analyst for the governor, with the subject line “UAW and unions” and one sentence in the body: “Remind me to talk to you about project on that tomorrow.” Niknejad did not respond to requests for an interview.

The next day, Garnett Decosimo, a senior policy analyst in Lee’s office, emailed Womack, requesting a meeting so Womack could share his “thoughts” with them given his “experience with previous UAW efforts to organize the VW plant.” Decosimo had previously worked alongside Womack on Corker’s staff.

When reached for comment, Decosimo admitted that he and Womack discussed the UAW organizing drive and said Lee had no knowledge of the discussion. But in the emails, Womack admitted he had also spoken with Blake Harris, Lee’s chief of staff, about the UAW on the day that the union filed the petition for election.

Decosimo refused to comment when asked if he had been in contact with any other groups or persons involved in fighting the UAW in 2014. Womack did not respond to requests for an interview.

The company also appears to be working with Republican leaders to oppose the UAW. Volkswagen senior executive vice president David Geanacopoulos reached out to Harris on April 12 to “brief” the governor’s office on “how we are handling the recently announced UAW petition,” according to emails we obtained. Geanacopoulos continued to provide updates to the governor’s office after the initial meeting, the emails show. When asked about the briefings the company was providing to the governor’s staff and if they are continuing, Geanacopoulos said, “I have no comment beyond what the emails themselves state.”

Lee’s visit to the plant, which was closed to the press, came a little under two weeks after Geanacopoulous’s meeting with Harris. Volkswagen carefully planned every minute of the governor’s visit, according to emails obtained by The Intercept, and the central focus was the governor’s speech to the workforce. Volkswagen did not respond to multiple requests for comment.

“All this evidence suggests that there is a high degree of coordination going on” between the governor’s office and Volkswagen, said John Logan, a labor history professor at San Francisco State University and scholar on employer opposition to union campaigns.

“The vote against the UAW was very close the last time around, and it seems highly likely that if it were not for the intervention of Haslam and Corker, the union would have won the election,” Logan said. “It appears that is a lesson that Governor Lee has taken to heart.”

Volkswagen has been engaging in tactics common to employer anti-union campaigns. Managers have handed out flyers insinuating that a vote for the union is a vote to close the plant and that workers could lose benefits like the lease car program and quarterly production bonuses if they unionize. Workers have also reported that the company has cracked down on lawfully protected union activity, such as handing out pro-union flyers in the parking lot or wearing UAW stickers on their uniforms.

The Border Patrol Calls Itself a Humanitarian Organization. A New Report Says That’s a Lie.

To Capture and Subdue: America’s Theft of Syrian Oil Has Very Little To Do With Money