GENEVA — Big pharmaceutical companies have not come out of COVID-19 looking like model global citizens. Pfizer has been accused…

GENEVA — Big pharmaceutical companies have not come out of COVID-19 looking like model global citizens. Pfizer has been accused of bullying South American governments after demanding they put up military bases as collateral in exchange for vaccines. Meanwhile, Bill Gates persuaded Oxford University to sign an exclusive deal with AstraZeneca for its new offering, rather than allow it to be copied freely by all. The British/Swedish multinational quickly announced it would fall 50 million vaccines short on its first shipment to the European Union.

But what if there were a looming health crisis that could make COVID look almost minor in comparison? The World Health Organization (WHO) has been warning of just such a case for some time now, predicting that antimicrobial resistance will kill up to 10 million people every year by 2050 — almost four times as many as the coronavirus has killed in the past 12 months.

“Antibiotic resistance is one of the biggest threats to global health, food security, and development today,” they write, noting that without effective antibiotics all manner of conditions — including pneumonia, tuberculosis, gonorrhea, and salmonellosis — could become far more deadly. Drug companies are making this situation worse by encouraging the overuse of our precious stores of antibiotics, particularly in the Global South and also by refusing to invest enough resources into creating new ones.

The more antibiotics are used, the more resistant bacteria become to them, meaning that humanity must guard its reserves and slow down the pathogens’ adaptive evolution by using them only when necessary. Between 2000 and 2015, antibiotic consumption decreased by 4% in rich nations but increased by 77% in developing ones, and their overuse has become rampant across the world. The poorer enforcement of medical laws in these countries leads manufacturers to “adopt unethical marketing approaches and develop creative ways to incentivize prescribing among healthcare providers,” in the words of Dr. Giorgia Sulis, an infectious disease physician and epidemiologist at McGill University, Quebec.

As Sulis explained to MintPress:

India is perhaps the best example in this regard, due to its large pharmaceutical market and the predominant role of the private sector in healthcare delivery. A private sector that is highly fragmented and largely unregulated, where a substantial proportion of providers lack any sort of formal medical training, is extremely vulnerable to [these kinds] of bad business strategies.”

Superbugs already kill an estimated 58,000 babies inside the country each year.

While India does have a national healthcare system, it is chronically understaffed and underequipped, leaving most of the population to rely on one of the millions of informal providers — health workers who have no official qualifications. Informal providers vastly outnumber trained professionals.

“There is a very haphazardly integrated type of medicine, which is practiced all over India. We have a professionalized modern healthcare system with regulations. But it is a system that is limited” in its size and scope, explained the London School of Hygiene and Tropical Medicine’s Meenakshi Gautham, an expert on antibiotic use in South Asia. “Informal providers or para-health workers are the ones who continue to meet the healthcare needs of millions of people who don’t have access to the formal health system.” 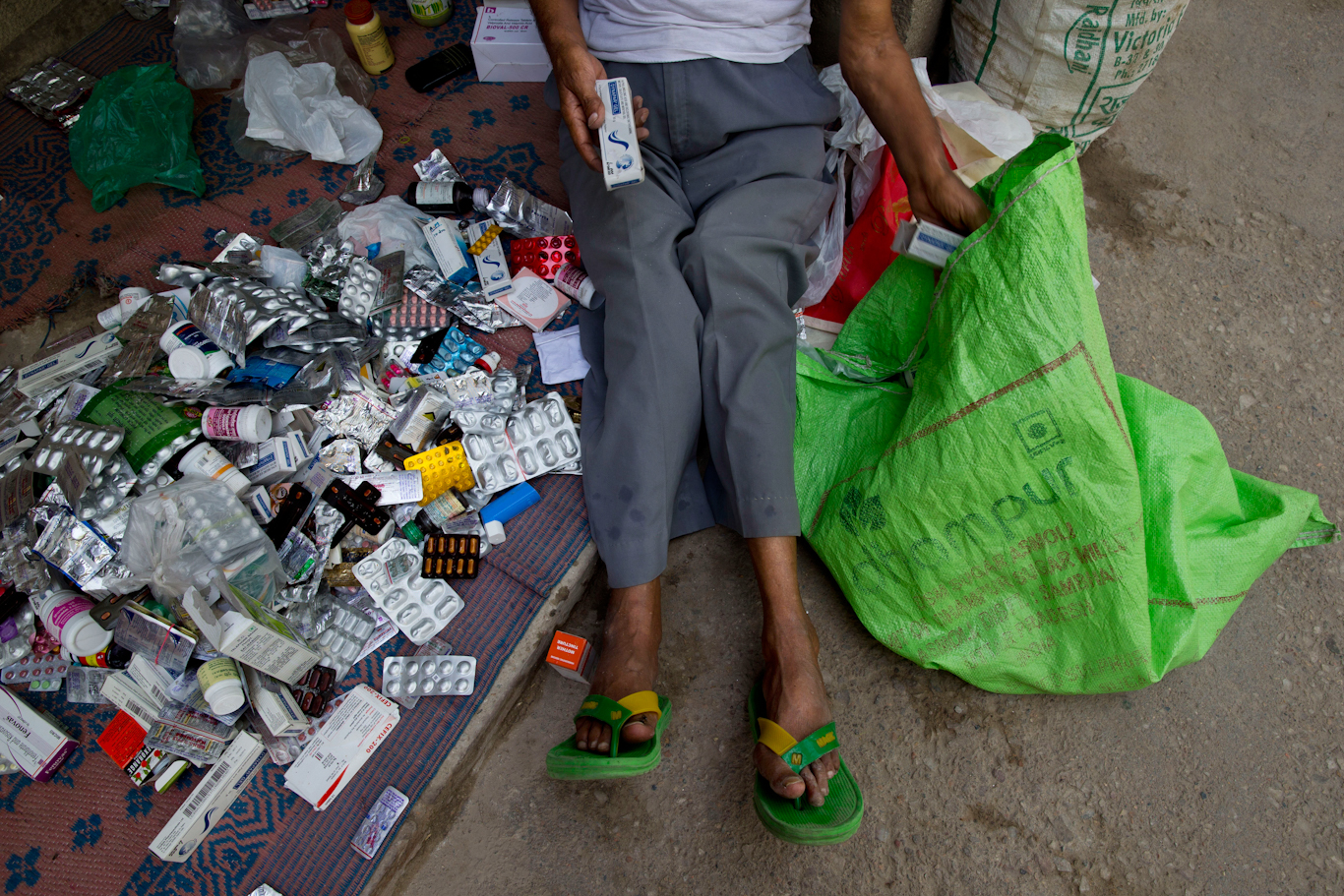 A man sorts through a bag of expired and partially used medication in New Delhi. Saurabh Das | AP

These informal providers are a goldmine of profits for big pharma. A 2019 study by the Bureau of Investigative Journalism found that a host of drug companies ply them with cash incentives, gift cards, medical equipment, vacations, televisions, free samples, and discounts on bulk purchases — all of which were intended to increase antibiotic use, thereby risking overprescription. Some salesmen admitted to undercover reporters that they knew the drugs were being misused, but that they were motivated purely by profit. They also revealed that they would promote drugs to informal providers based on their profitability, not their efficacy.

These informal workers are commonly written off derisively as “quacks” who give out treatments mindlessly. While Dr. Gautham’s work found that they often do have major holes in their medical understanding, she defended them as a vital part of a healthcare system under which seeing a qualified doctor is beyond the financial means of millions. “You might assume that they are illiterate and they are quacks and they do not know what they are doing but that is not true. What we found was that about 30% may even be graduates or postgraduates,” she said, adding that most had worked as doctors’ assistants and continued to be mentored by them.

Informal practitioners are usually respected and important members of their communities and, when in doubt, often consult qualified doctors on the best course of action. Dr. Gautham’s study also found that they did not prescribe any “reserve” antibiotics — powerful medications considered a last resort and therefore used in hospitals as sparingly as possible.

Unfortunately, informal practitioners routinely prescribe less than full courses of antibiotics, despite the fact that this is a huge driver of resistance. This is not done out of ignorance, but rather because India is such an unequal society that poor patients simply cannot afford long courses of antibiotics. “Packages are customized based on patients’ paying capacity. If the patient cannot afford a full course, then they will be given two or three days of antibiotics — or even less,” Dr. Gautham noted. The effect of this is that bacterial infections become stronger and more resistant to treatment with antibiotics. And bacteria do not respect borders. Consequently, the extreme inequality in much of the Global South is a direct threat to human survival elsewhere.

Thus, any top down approach simply banning informal practitioners from handing out antibiotics would surely do more harm than good, given the huge shortage of qualified doctors. Furthermore, Dr. Sulis’s study found that qualified practitioners were actually more likely to prescribe antibiotics than the so-called “quacks.” This could be because licensed professionals are subject to exactly the same incentives and financial rewards that their unlicensed peers are under — a system that also prevails across the United States.

In 2019, ProPublica found more than 700 American doctors who had received more than $ 1 million each from drug and medical device companies. It is commonplace for U.S. doctors to receive financial and other rewards for prescribing certain drugs, a system that undermines their neutrality. Across the world, big pharma wines and dines medical professionals in expensive resorts, claiming these events are educational conferences. But the line between informative events and expense-paid vacations is not always easy to distinguish.

A second way in which giant pharmaceutical corporations are aiding the spread of resistance is their refusal to devote the necessary resources towards replenishing stores of new antibiotics. Investment in the area has rapidly dwindled. “The big problem is that we do not have any novel antibiotics in the pipeline that we can expect to see in the near future… So we really have to protect those that we do have,” Dr. Gautham told MintPress.

And while the Global South overprescribes antibiotics, in the West farm animals are pumped full of them, farmers even giving them to healthy animals so they can be packed tighter in ever-increasing herd sizes. The WHO notes that in many countries, 80% of medically important antibiotic consumption goes to farm animals and has strongly recommended a wholesale reduction of the practice. 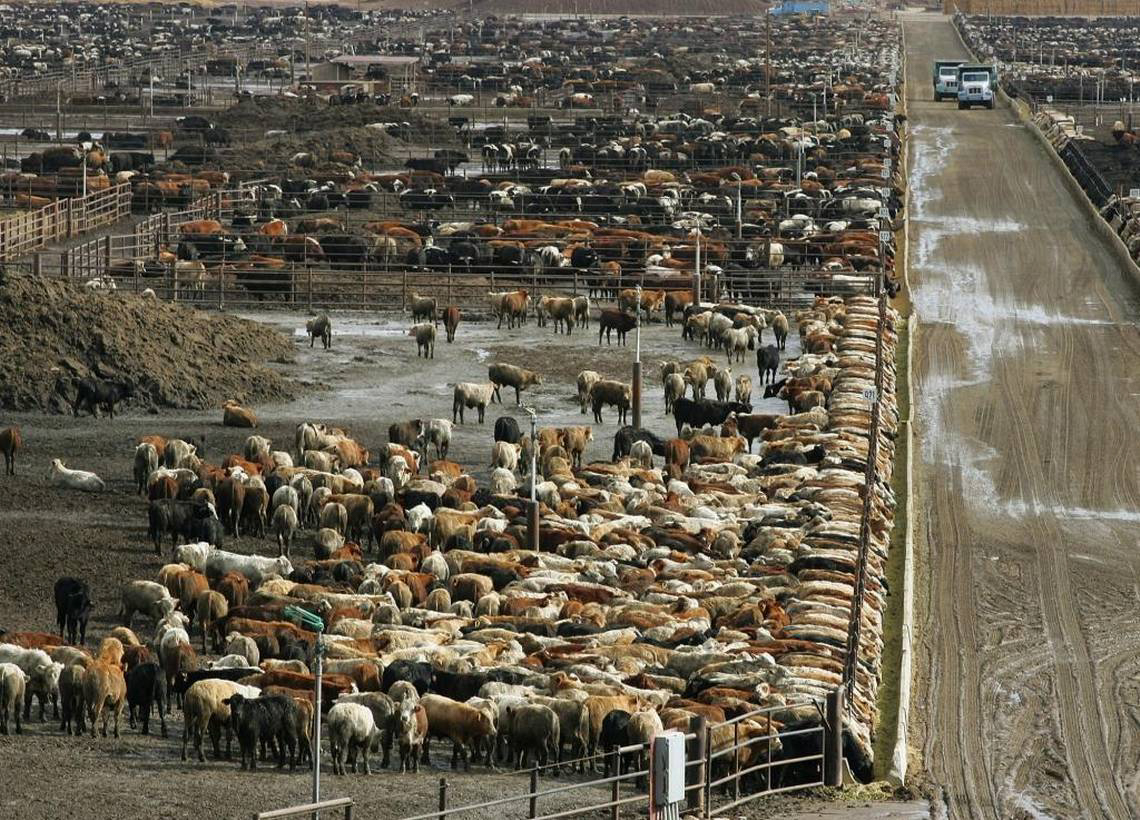 Herds of cattle at a factory farm in Coalinga, California. Gary Kazanjian | AP

Antibiotics used in farms spill over into the surrounding environment through run-off and waste, creating resistance to drugs and endangering human health. Unfortunately, the for-profit corporate agriculture sector has little regard for the consequences. As one paper in the British Journal of General Practice noted,

In animals and fish, antibiotics are used as a substitute for good hygiene, with little understanding of how this might impact on antimicrobial resistance in humans. As a society we must urgently reconsider how we use antimicrobials to preserve this valuable resource for future generations.”

The hyper-exploitation of animals is also leading to dangerous outbreaks of zoonotic (animal to human) diseases.

Ultimately, the problem of antibiotic overprescription is structural in nature, and there is little end to it in sight. As Dr. Sulis told MintPress: “The industry has no interest at all in raising awareness on the importance of using antibiotics wisely and the potential implications of inappropriate use, including overprescription,” although she noted that it was difficult to accurately weigh up the proportion of blame they deserved and to disentangle their role from other key drivers of the crisis.

Nothing to see here, just a looming disaster

The negative effects of this looming scenario are profound. Since the adoption of penicillin in the 1940s, the widespread use of antibiotics is estimated to have extended average life expectancy by 20 years. Dr. Gautham noted that “as antibiotic overuse keeps increasing, then all those antibiotics that we have today will slowly become ineffective against even the most common infections.”

Thus the conditions of the past will become the maladies of the future. Cancer treatments such as chemotherapy, cesarean sections, and other common surgeries will be in major jeopardy, as they require antibiotics to prevent any post-surgical and opportunistic infections. Healthcare costs will spike as conditions that were treatable in a few days will draw on for weeks, and some cases may not be recoverable. As Dr. Sulis warned:

The consequences ultimately affect everyone on the planet. We are already facing a dramatic increase in incidence of multi-drug- and extremely drug-resistant infections, but we are running out of effective therapeutic options. This scenario is bound to get worse over the next few years and, in the absence of countermeasures, it will have an impact on healthcare as a whole, not to mention the economic losses.”

For such a profound problem, which threatens the very foundation of modern medicine, the story is receiving barely any attention in the media. Indeed, so uninterested is the press in pharmaceutical profiteering accelerating superbugs that media-literacy group Project Censored chose it as one of their top 25 most censored stories of 2019-2020. The only substantial corporate reporting on the unethical sale of antibiotics, their research showed, was a single 2016 investigation by The New York Times.

Unlike with COVID, there is still time to prevent mass suffering. And yet this systemic problem appears to be getting worse, not better, as we move closer towards it. If the past year has taught humanity anything, it is that bugs do not respect borders and increased global planning and cooperation are vital to meet the planet’s most pressing problems head-on. Unfortunately, it seems we are sleepwalking into another preventable catastrophe. And few are even talking about it.

Alan MacLeod is Senior Staff Writer for MintPress News. After completing his PhD in 2017 he published two books: Bad News From Venezuela: Twenty Years of Fake News and Misreporting and Propaganda in the Information Age: Still Manufacturing Consent, as well as a number of academic articles. He has also contributed to FAIR.org, The Guardian, Salon, The Grayzone, Jacobin Magazine, and Common Dreams.

The Hidden Cruelty of Trump’s Executions

Iraqis to the United States: What Part of “Go Home” Don’t You Understand?