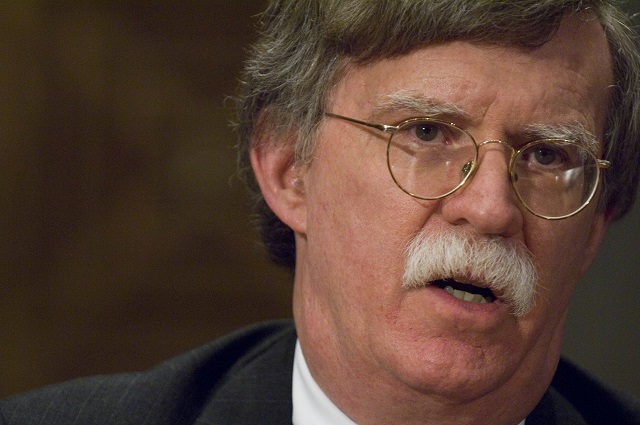 Early next month, Iraq War criminal and serial liar John Bolton will become Trump’s National Security Adviser. This all-powerful position is made stronger by the fact that Trump usually takes the opinion of the last person he speaks to and makes it his own. More often than not, Bolton will be the last person in the room with Trump when matters of life and death are decided. This is flatly terrifying.

A long time ago, I did some of the first reporting on a far-right think tank called The Project for a New American Century, or PNAC. An offspring of the American Enterprise Institute (AEI), PNAC was considered by most Republicans at the time to be little more than a factory for daft, dangerous foreign policy ideas.

Few members of PNAC were taken seriously within government circles, but they kept busy regardless. During the Clinton administration, they snuggled up to an Iraqi ex-pat named Ahmad Chalabi, who was convicted of bank fraud before offering himself to PNAC signatory Donald Rumsfeld as the perfect replacement for Saddam Hussein. All they needed was a war.

A funny thing happened to PNAC, the country and the world when the millennium turned. All those Y2K fears about melting computers and airplanes falling from the sky were never realized. Nevertheless, the world as we know it ended on the evening of December 12, 2000, when the Supreme Court gave the Executive Branch to George W. Bush and Dick Cheney. Like as not, Bush had never heard of PNAC. Cheney was a charter member.

Bolton became the dream weaver for the Iraq war, the loudest advocate for false intelligence on Iraq’s weapons capabilities.

The world ended, and after September 11 — the “new Pearl Harbor” envisioned in Rebuilding America’s Defenses, PNAC’s blueprint for world domination — the world was born again in the fires of “Shock & Awe.” From top to bottom, the White House was staffed with PNAC ideologues who envisioned total war in the Middle East, regime change from Beirut to Cairo to Karachi to Riyadh. Beside Cheney and Rumsfeld were Lewis Libby, Paul Wolfowitz, Eliot Abrams, Richard Perle and a dramatically mustachioed rogue named John Bolton.

Bolton’s gruesome personal behavior with staff and others has become lore. He once got crossways with a federal contractor named Melody Townsel, and chased her through the halls of a Russian hotel while pelting her with shoes and other available missiles. Over the next several days, he stalked Townsel around the hotel, shouting threats and shoving threatening letters under her door. This is not a guy you want to give a staff to.

Even by PNAC’s grim standards, John Bolton is a snaggletoothed monster. The people who agree with him are still freaked out by him, because he is a ball of terrifying war hubris made flesh, yet somehow he keeps landing jobs within walking distance of the Oval Office. George W. Bush made him UN ambassador while Congress wasn’t home. He was fantastic at alienating other nations, but wasn’t really in a position to do the kind of serious damage he’s capable of.

The man, simply put, wants war wherever and whenever he can get it. With Trump, Bolton will get his chance.

However, that damage was done in triplicate while Bolton served as Undersecretary for Arms Control, essentially the government’s point person for weapons of mass destruction. In this capacity, Bolton became the dream weaver for the Iraq war, the loudest advocate for false intelligence on Iraq’s weapons capabilities, and he did not hesitate to bulldoze any lower-lever staffers who disagreed. Iraq was the starting place for the PNAC plan, the jump-off point to a toppling of virtually every government in the region, and Bolton did yeoman’s work to see it all brought to fruition.

The fire they started is still burning out of control. Eighteen years after the Supreme Court’s Bush v. Gore decision and 15 years after Bush’s invasion of Iraq, too much of the world is what John Bolton and his PNAC friends have made it: A smoldering crater stinking of permanent war, surrounded by refugees and choking on austerity to pay the butcher’s bill. We are a shadow of ourselves, timorously following a blowhard strongman as he stomps through the wreckage left behind by people like his new National Security Adviser.

Bolton isn’t finished yet, either. Just last month, he forcefully advocated for a first-strike attack against North Korea. He calls for the preemptive bombing of Iran with dreary regularity during his many Fox News appearances, and has labored for years to arrange the proper set of circumstances that would allow Tehran to be rendered into a pile of rubble.

The man, simply put, wants war wherever and whenever he can get it.

With Trump, Bolton will get his chance. The job of the National Security Adviser is to judge and filter intelligence data for the president. In this incredibly powerful position, John Bolton will literally be creating reality for Trump according to his own twisted, violent vision of how US military might is best used. The man is a manufacturer of corpses, and has been so for a very long time.

John Bolton will very often be the last person in the room with Trump when the life-and-death decisions come rolling down.

It has been firmly established by now that the most powerful person in the country is the last person Trump speaks to before making a decision. This phenomenon has been on vivid display as he staggers through debates on repealing the ACA, tax cuts, the budget, DACA and gun control. In every instance, Trump trumpeted nearly by rote the opinion of whoever had his ear five minutes before. There is more whiplash in Congress because of this than you’ll find at a demolition derby. It is fact.

As National Security Adviser, John Bolton — serial liar, lover of war, volatile abuser — will very often be the last person in the room with Trump when the life-and-death decisions come rolling down. Think on that.

John Bolton at the right hand of this president is flatly terrifying. More than at any point since this whole nightmare began, I am afraid.

A Trojan Horse? PathCheck’s Contact Tracing App Coming to Minnesota and the World