In front of a small crowd of activists and media, city workers remove a statue of J. Marion Sims, a… 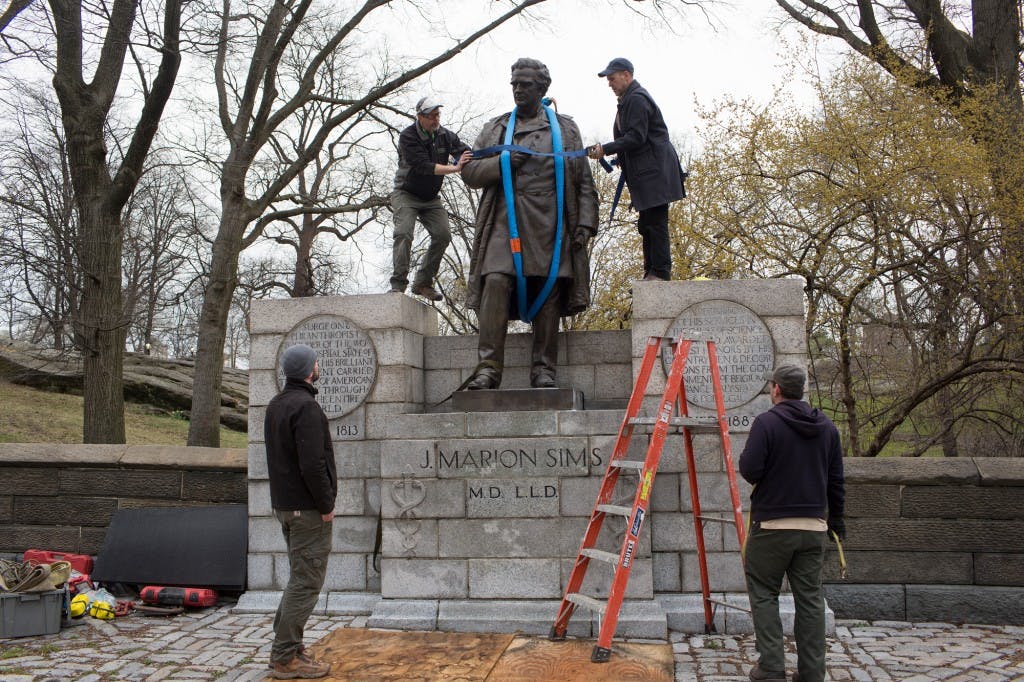 In front of a small crowd of activists and media, city workers remove a statue of J. Marion Sims, a surgeon and medical pioneer in the field of gynecology, from its perch on the edge of Central Park on April 17, 2018 in Harlem, New York.

Forced sterilization of poor women of color is an American tradition.

Rightful public fury has followed allegations this week that hysterectomies were performed on numerous women imprisoned at U.S. Immigration and Customs Enforcement’s Irwin County Detention Center. According to a whistleblower, a nurse at the facility, the women “reacted confused” when they learned what had been done to their bodies.

The allegations produced a flood of commentary. Some drew comparisons to Nazi Germany’s eugenic sterilization programs. These commentators, however, did not need to reach so far across the globe: Some of the most extreme allegations echo a long and disgraceful history right here in America.

If the whistleblower claims are true, they would be extensions of — not aberrations from — a wholly American practice of sterilizing populations deemed “undesirable.”

The accounts of ongoing brutalities at ICE concentration camps may be a direct consequence of fascistic Trumpian excess, but, if the whistleblower claims are proven true, they would be extensions of — not aberrations from — a wholly American practice of sterilizing populations deemed “undesirable.” President Donald Trump’s administration did not bring white supremacist eugenic practices to U.S. soil: They have always been inherent to a country fixated on its “borders” and locking certain people away. It does an injustice to centuries of victims of sterilization to pretend otherwise.

Like almost every report on detainee treatment at ICE concentration camps, the whistleblower complaint filed this week makes accusations of routine dehumanization. Dawn Wooten, a licensed practical nurse at a Georgia-based detention center, filed a whistleblower complaint to the Department of Homeland Security’s Office of Inspector General that a doctor contracted to treat detained women had performed a seemingly high rate of hysterectomies. Wooten and one of the groups representing her, Project South, raised issues about the women giving what the complaint called a lack of “proper informed consent” before procedures. The Intercept was able to gather independent allegations from detainees and lawyers that were consistent with Project South’s complaints.

In the complaint to the Office of Inspector General, the whistleblower called the doctor “the uterus collector” — a moniker seemingly ripped from the annals of notorious eugenicists.

And such annals are part of a very American legacy. The man dubbed the “father of modern gynecology,” J. Marion Sims, conducted experiments on enslaved Black women without anesthesia, but was nonetheless lionized in the 19th century with statues around the country. Only now are some of them being taken down — the mere beginning of a long overdue reckoning.

Eugenics programs directed at decimating the lives of Black, Indigenous, and other people of color, particularly poor and immigrant communities, as well as people with disabilities, were an explicit part of U.S. policy in the 20th century. Thirty-two states maintained federally funded eugenics boards, tasked with ordering sterilizations of women — and sometimes men — deemed “undesirable.” Tens of thousands of forced sterilizations were carried out nationwide last century. California’s so-called Asexualization Acts, which led to 20,000 men and women losing reproductive capacity, were a direct inspiration to Nazi eugenicists. “There is today one state,” Adolf Hitler wrote, “in which at least weak beginnings toward a better conception [of citizenship] are noticeable. Of course, it is not our model German Republic, but the United States.”

A 1965 survey found that a staggering one-third of Puerto Rican women between 20 and 49 years old had been sterilized, a result of U.S. population control programs enforced on the territory. So common were coerced sterilizations in the American South that they became referred to as “Mississippi appendectomies.” The extent to which these practices fit within a genocidal, white supremacist ideology cannot be underestimated. Between 1930 to 1970, 65 percent of the 7,600-plus sterilizations ordered by the state of North Carolina were carried out on Black women.

And as Angelin Chaplin noted this week in The Cut, “During the same time that Roe v. Wade granted mostly white women more bodily autonomy in the 1970s, approximately 25,000 Native American women were forcibly sterilized by the U.S. government — between 25 and 50 percent of the female population.”

By the end of 1970s, thanks in part to the organizing efforts of women of Mexican origin in California, programs of state-ordered sterilizations had ended and guidelines were put in place to better ensure informed consent around sterilization procedures (although numerous laws enabling state-forced sterilization remain on the books).

“The fact that Black and brown immigrant women are held in an extremely vulnerable position at this prison where they have no control over their bodies and no say what it is done to them is sickening.”

But the absence of explicit eugenics policies did not end eugenicist practices. The denial of reproductive choice to poor people of color, though sterilization, forced birth, and mass incarceration — alongside every form of necropolitical governance that leaves communities to suffer and die — is an assertion of which lives get to matter in the U.S. As recently as 2013, an investigation found that at least 148 female inmates in two California prisons were sterilized between 2006 to 2010; many of the women said they were coerced into the procedure.

The whistleblower and detainee’s allegations from current U.S. concentration camps sit squarely in this American legacy. “The fact that Black and brown immigrant women are held in an extremely vulnerable position at this prison where they have no control over their bodies and no say what it is done to them is sickening,” said Azadeh Shahshahani, legal and advocacy director of Project South. “Irwin should be shut down immediately and people should be freed. The United States government, as well as the private prison corporation running this prison, should be held accountable.”

She is right. But holding the United States accountable in any robust sense requires a reckoning with the ways it has been defined by the control of Black and brown bodies: domestically, at its borders, and internationally.

There need be no explicit policy of forced sterilization for a eugenicist system to exist. Normalized neglect and dehumanization are sufficient. These are Trumpian specialties, yes, but as American as apple pie.

Executions Are On Hold, but States Are Still Pushing for Death Amid the Coronavirus Pandemic

The Case Against AIPAC