Democrats, under the influence of energetic democratic socialists, have recently begun trotting out ideas for new government spending: Medicare for… 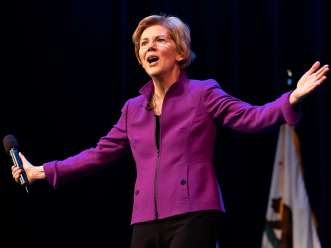 Democrats, under the influence of energetic democratic socialists, have recently begun trotting out ideas for new government spending: Medicare for All, the Green New Deal, expanded Social Security benefits, and free public college are the big ticket items.

Yet when it comes to taxes—the means by which government pays for things—the Democrats have been comparatively quiet. Yes, several 2020 hopefuls have backed new taxes on the wealthy; some of these proposals have even included revenue estimates. But as two economists who analyzed Sen. Elizabeth Warren’s (D–Mass.) wealth tax observe, it’s “not about collecting revenue,” but about “regulating inequality.” Progressive Democrats don’t actually expect increasing the top marginal tax rate will pay for universal health care, not to mention everything else they’ve proposed.

Sometimes, reporters will ask proponents of new spending how they would pay for their ideas, which is another way of saying, “who would you tax, and by how much?” An increasingly popular answer amongst prominent Democrats is that this is no longer a question worth asking. Finding ways to offset new spending doesn’t make any sense, according to Warren. Congressional PAYGO rules, which require new taxes or spending reductions to balance out new spending, are a threat to progressive goals like single-payer health care, says Rep. Alexandria Ocasio-Cortez (D–N.Y.). When Rep. Pramila Jayapal (D–Wash.) introduced a new Medicare for All bill last week, she did not specify how it would be financed. Fiscal math and single-payer don’t mix.

Asked about financing the Green New Deal, Sen. Kamala Harris (D–Calif.) took issue with the premise of the question, insisting that it was better understood as an investment. “It’s not about cost,” she said. One recent estimate put the price tag of the Green New Deal as high as $ 90 trillion. That figure is a cost. Harris and her peers just don’t want to acknowledge it.

That’s partly because of the pernicious influence of modern monetary theory (MMT), a slightly fringey notion borrowed from academic economists that some Democratic politicians have twisted to mean that deficits never matter, occasionally with the help of MMT’s academic proponents. (More on this at a later date.) But, by and large, MMT is just a pretext, an excuse for Democrats to offer the public what every politician dreams of: massive new benefits without any new taxation, or at least none that affects the majority of voters.

Aside from Sanders and Ocasio-Cortez, most of today’s prominent Democrats are not, strictly speaking, socialists. But they have been influenced by its proponents and its ideas. And in response, they have adopted a partial form of democratic socialism that promotes all sorts of new spending, but not the broad middle class taxes that typically go along with it. These Democrats represent a peculiar, American strain of pop democratic socialism—call it low-tax socialism. It’s easy enough to understand the political incentives, but in some ways, it’s even less sensible than the real thing.

Consider how taxation works in the Nordic countries that many American socialists describe as their models. Yes, taxes are high on the rich. But as the Tax Foundation noted during Sanders’ last presidential campaign, they are also high on the middle class. The 70 percent top marginal tax rate floated by Ocasio-Cortez would apply to income earned over $ 10 million, affecting only about 16,000 Americans each year. In countries like Denmark, Sweden, and Finland, marginal tax rates of near 60 percent hit earners deep into the middle class. Denmark’s 60 percent marginal rate applies to income over 1.2 times the national average, which in the U.S. would hit earners making just $ 60,000 a year—not exactly millionaires and billionaires. These countries also typically rely on value-added taxes that are inherently regressive, placing a bigger burden on the poor and middle class than on the rich.

The low-tax socialists, or at least those running for office, have tended to sidestep this aspect of the Nordic model, focusing on new spending and new benefits, and implying that the rich—and only the rich—will pay.

The job of a politician is, in part, to read the public mood, which makes this a telling dodge. It assumes that Americans won’t go for democratic socialism, or its pared down U.S. equivalent, if it means that middle class taxes will have to substantially rise.

Republicans, of course, have their own version of this ruse, where they push tax cuts without reductions in spending or government services, as if the two aren’t really connected. The low-tax socialists of today’s Democratic party have thus accepted an essentially Republican premise—that most Americans won’t stand for higher taxes, even if those taxes are billed as the price of new government services. In this, and perhaps only this, they are probably right.

Gov. Newsom Proposes Eliminating One of California’s Many Marijuana Taxes