Spread the love Lowell, MI — Over the last two weeks, anger in the US toward the establishment spilled over…

Lowell, MI — Over the last two weeks, anger in the US toward the establishment spilled over into the streets and while much of that anger was devoted toward government property and law enforcement, another unfortunate reality unfolded shortly after. Opportunists would exploit the the peaceful protests for personal gain and loot and destroy private property.

Looting and rioting has leveled dozens of small businesses and mom and pop shops have seen their life’s work — which was already struggling from the lockdown — burn to the ground. During the destruction, however, many folks refused to lay down and let the looting crush their part of the American dream.

Armed to teeth with semi-automatic assault rifles and handguns, multiple gun owners — both black and white — have reportedly been coming together to protect their private business from looters.

As cops focused on arresting and pepper spraying journalists, thieves and vandals were roaming free, and emptying the shelves of mom and pop shops while laying waste to others. The only deterrent to these bad actors destroying and robbing businesses were good actors — with big guns — who were there to stop them.

Those who protected their businesses with guns were not looted. Unfortunately, however, there is a sentiment in many parts of the country that is anti-self-defense. People who do not rely on cops to keep them safe are looked down upon by many.

One supporter of citizens practicing self-defense was Lowell police chief Steven Bukala who posted on Facebook that he supports people who protect themselves and their town from would-be looters.

Last week, the Lowell Police Department took to its Facebook page to claim they support the Second Amendment.

“We at the Lowell Police Department support the legally armed citizen and the Second Amendment,” the chief wrote on the department’s Facebook page.

This entirely peaceful and pro-freedom message was then met with backlash by those who have nothing better to do than to attack the few good cops left who uphold the constitution. The chief then defended his position on his personal Facebook page. 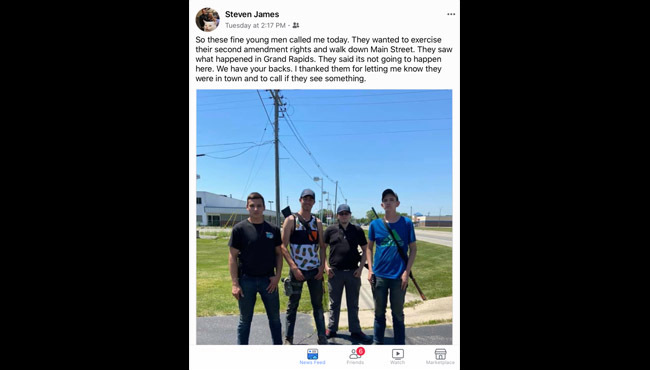 Bukala wrote: “So these fine young men called me today. They wanted to exercise their Second Amendment rights and walk down Main Street. They saw what happened in Grand Rapids. They said it’s not going to happen here. We have your backs. I thanked them for letting me know they were in town and to call if they see something.”

For supporting self-defense and the Second Amendment rights of citizens, Bukala was essentially fired. He was told to resign by 5 p.m. Thursday or that he would be fired at 5:01 p.m., according to documents obtained Friday by News 8. He opted to resign.

The city manager cited Bukala for violating city policy, including “conduct unbecoming of a police officer,” and “Personnel shall not allow personal feelings to influence their professional conduct.”

After they fired him, the department issued an apology for the chief supporting the Second Amendment.

Fortunately, others disagreed. “He was doing his job the best he could,” Tonia North, owner of North Star Antiques on Main Street in Lowell said. “It’s a right for people to bear those arms. If people have a problem with it, there’s a different place you have to go for that.”

This entire debacle reeks of anti-second amendment sentiment as there were no laws broken and gun rights are civil rights.

In Minneapolis, the often anti-Second Amendment WaPo expressed their support for citizens doing exactly what the chief supported in Lowell. The armed citizens in Minneapolis even took it one step further, however, and claimed they don’t even need the police.

As we reported this week, armed citizens have been patrolling the streets since the police essentially abandoned their posts. A group called the Minnesota Freedom Riders has been policing the community in the absence of cops, successfully.

“I think that we have got to dramatically reimagine how we keep people safe in cities. I think that’s been true,” a member of the group, Jeremiah Ellison said as he stood on his porch, taking a break from a recent patrol, according to WaPo. “But I think that we have underestimated just how urgent that work is. The police forces in the way that they’ve existed, I think need to not exist.”

How is it okay for one group to do it but not okay for another?

WATCH: Cop Attacks Tiny 14yo Boy, Punches and Chokes Him Over a Swisher Sweet

A Nebraska County Took His $25,000 Property To Settle a $986 Tax Debt. Now the U.S. Supreme Court Could Get Involved.

Abolish Foreign Aid, All of It